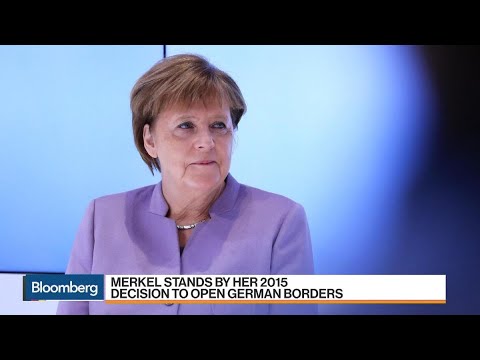 She said that Trump’s isolationism cannot make America greater. Turning inward and abandoning friends can only diminish America, she said:

“An America that does not care about the rest of the world and just thinks about itself does not make for a big and great country.”

Asked about her philosophy for dealing with tough customers among other politicians, she said, “Don’t try to change your counterpart’s mind, but find and exploit the wiggle room within their own thinking. And if there isn’t any room for compromise, don’t be afraid to “voice dissent.”

And boy did she dissent from Trump on North Korea: “I do not agree that all diplomatic means have been exhausted,” she said. “We can and should do no more than that.”

She said that Germany would not necessarily follow a US lead into a more aggressive policy on North Korea, that she does not see a military solution.

She said Germany will try to raise defense spending to 2% of GDP, as Trump is insisting NATO members do, she would not try to achieve that goal by cutting social spending.

Merkel is in the midst of an election contest, and her Social Democratic Party rival has slammed her for being unduly deferential to Trump. She declined to speak disrespectfully of the American president, but her remarks were no doubt intended to underscore her independence of him. Restating that social programs will take precedence over defense spending was intended to blunt an SPD critique. She has a ten point lead in the polls.

Merkel said, “We can’t think that to become bigger others must become smaller…we should have the view that we can all win from globalization.”

Social scientists call the situation where if one player gets a bigger slice of the pie, it means the others get a smaller one a “zero sum game.” Merkel is saying that globalization is not a zero sum game, but can be pursued in such a way that the whole pie gets bigger so that all the players benefit.

Trump thinks of the world economy as a zero sum game. If China is getting rich it means the US is getting a raw deal. Economists view as fallacies such approaches to the economy that see it as fixed. For instance, the mantra that a higher statewide minimum wage will hurt business is always wrong according to empirical economic studies. It brings more people out into the labor force, which benefits employers and allows business expansion, and gives people more disposable income, which benefits retailers.

Immigration is another area where Trump incorrectly sees a zero sum game. Immigrants typically help grow the economy. Turkey had gone toward stagnation and then some two million Syrian refugees came in, and they contributed to an uptick of Turkish economic growth to 4% per annum. Some businesses, including farms, had been stymied with regard to expansion by a labor shortage, which the Syrians eased. Some also brought in money to invest.

In contrast, Merkel believes in at least having an immigration policy and won’t back off her commitments to refugees.

Merkel’s declaration of independence from Trump’s Washington on N. Korea is highly significant, since ordinarily Germany follows the US lead, even if its laws against foreign military entanglements make it a not very robust military partner. (It sent peace keeping forces to Afghanistan but the German officers did not see their mission as war fighting, to the annoyance of NATO allies in Afghanistan such as Italy).

Some are suggesting that Merkel is now the leader of the free world. Certainly, that is true at the level of moral tone. If only the world were so mature that a largely pacifist and unarmed country could be its leader!