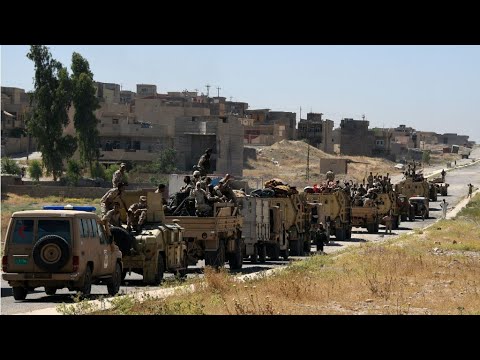 [N.B. The offensive against ISIL (Daesh) in Tal Afar began on Sunday. – JC]

Intensive air raids, secret political talks and military forces gathering on the outskirts of the city: Everything points to the battle of Tal Afar – almost the extremists’ last stand in Iraq . . .

Over the past two weeks, Iraqi army captain, Mohammed al-Saedi, a senior officer in the 92nd Brigade, and his men have been watching columns of smoke rising from the centre of Tal Afar. The northern Iraqi city is one of the very last strongholds of the extremist group known as the Islamic State in Iraq.

“Preparations for the battle in Tal Afar are being completed and there are many battalions coming to the outskirts of the city,” al-Saedi told NIQASH. “This includes the Iraqi army, the federal police, counter terrorism forces and the Shiite Muslim militias.”

The columns of smoke coming out of Tal Afar are caused by bombing by the international coalition fighting the Islamic State, or IS, group as well as Iraqi planes. They are bombing the city to weaken the IS group’s defences there.

There are serious concerns that we will see destruction as bad as that which happened in western Mosul.

The fight for Tal Afar has started but so far land forces have not advanced and officials are reluctant to give away the exact timing as to when this will happen. However al-Saedi says he expects a relatively uncomplicated fight. More senior officers than al-Saedi, such as Najim al-Jibouri, the commander of the Ninawa theatre of operations, have also expressed this opinion even though some US commanders have differed.

The location of Tal Afar city is of strategic importance. It sits around 70 kilometres away from Mosul and is around 60 kilometres away from the Turkish and Syrian borders. There are three small towns in the Tal Afar district, with the towns of Rabia and Ayadiyah controlled by the IS group and Zamar under the control of Iraqi Kurdish troops.

Before the security crisis sparked by the IS group began, an estimated 300,000 people lived in Tal Afar, mostly Shiite and Sunni Muslims of the Turkmen ethnic group. There were also Arabs and Kurds there. After the IS group took over the area, all the Shiite Muslims left, as did the Iraqi military, fearing death or punishment. Several thousand of the Sunni Muslim population remained.

The main challenges facing pro-government forces in Tal Afar include the size of the district – it is double the area of Mosul city – and the fact that some neighbourhoods in Tal Afar city are similar to those on the western side of Mosul: That is, the houses are older and densely packed in small alleyways.

“The centre of Tal Afar is full of narrow, overlapping neighbourhoods, with lots of old houses abandoned by residents,” confirms Kamal al-Ajmali, one of the community leaders from Tal Afar. “All those houses are bound to be booby trapped with explosives. There are serious concerns that we will see destruction as bad as that which happened in western Mosul.”

“The IS group has been preparing for this battle for a long time and Tal Afar is the extremists’ last stronghold,” al-Ajmali added. “They may well fight to the bitter end here. I believe the government should have started operations to push the IS group out of Tal Afar at the same time as they started fighting for Mosul. Because they did not, large numbers of IS extremists were allowed to escape from Mosul, together with their families, and to get to Tal Afar.”

Tal Afar is now under siege. The Iraqi military is deployed to the east in the Badush area, Shiite Muslim militias are in the south and the west around Tal Abta and Sinjar city, and Iraqi Kurdish forces are in the north.

Another major problem for the pro-government forces though is the loss of fighters they have had to deal with over the past months fighting in and around Mosul, in the longest stretch of fighting against the IS group. In comparison, fighting in Fallujah took just three weeks and in Tikrit it was around four. In Mosul, it was nine months.

During this time, the crack counter-terrorism troops, lauded as heroes by many Iraqis, suffered many casualties. Yet Iraqi commanders have decided that these units will spearhead the attack in Tal Afar, just as they did at first in Mosul.

According to government sources, fighters participating in the fighting for Tal Afar will include a number of the counter-terrorism units, the 9th and the 6th armoured divisions, the 3rd brigade of the quick response troops, the federal police and four factions of the Shiite Muslim militias.

The last component is the one that is causing some problems between Turkey and Iran. During the fighting in Mosul, only one Shiite Muslim group took part, the Al Abbas brigade. Turkish officials have been warning against the participation of more Shiite Muslim militias for months, fearing illegal acts and revenge killings against the Sunni Muslims who remained in the area. Turkey cares about these because they are mostly of Turkmen ethnicity. Shiite Turkmen believe that their neighbours who stayed all support the IS group.

Turkish troops remain in Iraq, in a camp that is about 50 kilometres away from the battlefield. Despite the fact that their presence has ignited a diplomatic spat between Iraq and Turkey, the Turkish soldiers have remained there, to threaten Iran should Shiite Muslim militias get too close to the Turkmen of Tal Afar.

However Turkey’s fears have apparently been eased recently, an Iraqi MP told NIQASH on condition of anonymity because he was not authorised to talk to the press. Secret talks were held and “Iraq made pledges that there would be no sectarian violence,” the politician told NIQASH.

In order to ensure this, the Iraqi government had decided upon four Shiite Muslim militias to fight at Tal Afar. Three of them were militias that were known to be more loyal to the Iraqi government, associated directly with the senior cleric, Ali al-Sistani, as opposed to those militias that openly pledge loyalty to the neighbouring Iranian government. The fourth faction would be the group known as the Hussein Brigade; most of the fighters are Shiites originally from Tal Afar who will know the city’s geography better than most.

Other Shiite Muslim militias, including those who have expressed loyalty to Iran – such as the Badr organization and the League of the Righteous – will secure the outskirts of the city, ensuring the extremists cannot escape, as well as take charge of security in Tal Afar’s smaller towns.

A final problem will be the waves of displaced locals that the authorities are expecting. As signs of an impending battle mount, locals from inside Tal Afar have already started trying to leave, says Ahmad al-Jibouri, an MP for Mosul. “The number of displaced families isn’t that high yet,” al-Jibouri said. “But it will increase when fighting starts. The government needs to take measures to shelter those people.”

“We estimate there will be around 35,000 people coming from the city,” Husam al-Abbar, a member of the Ninawa provincial council, notes. “But we are well prepared to receive them,” he added, pointing out that there were 2,890 tents erected at Salamiyah camp and 3,600 more at the Bartala camp, both near Mosul. Additionally, there were also empty tents left by displaced people who had returned to Mosul.