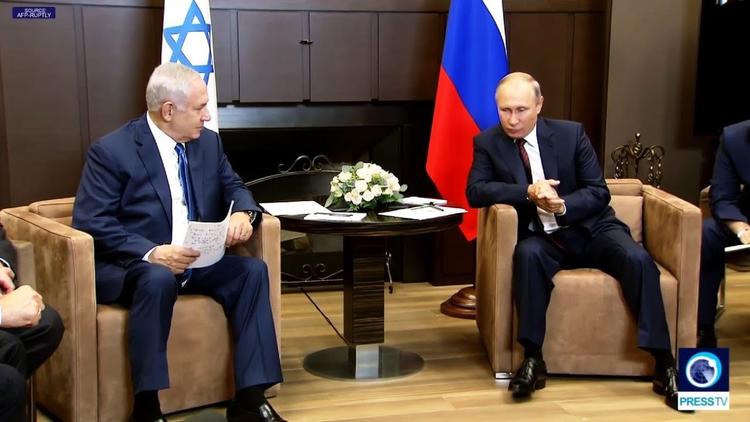 Israeli prime minister Binyamin Netanyahu filled the ear of visiting UN secretary general Antonio Guterres with complaints about Iran and Hizbullah on the latter’s visit to the region.

He complained that the UN border patrol, UNIFIL, in South Lebanon, has not reported the thousands of rockets delivered to Hizbullah by Iran.

He also alleged that Tehran is turning Syria into a military base, and aims at making Damascus and Beirut two fronts from which it can launch war on Israel.

He also accused Iran of establishing factories in Syria and Lebanon to build precision missiles so that it can destroy Israel, which he said is Iran’s goal.

He said Iran was making Damascus a fortress from which it could attack.

Netanyahu had made similar accusations and exhibited similar bluster on a recent trip to see Vladimir Putin in Moscow. Since Iran is useful to Putin in Syria, inasmuch as he wants to see Sunni radicals allied with extremist Chechens defeated. He is therefore unmoved by Israeli unease, which in any case is not well founded.

Netanyahu’s dark apocalyptic fantasies would be a little comical if he were not so erratic and did not give every evidence of believing them.

First of all, Iran has not vowed to wipe Israel off the face of the map. Rather, Iran has a no first strike policy that has been repeatedly underlined by Ayatollah Khamenei and President Hassan Rouhani. The only country in the region that has gone around invading other countries until recently was Israel. Nowadays Saudi Arabia has joined the club with its attack on Yemen.

Second of all, Iran has not turned Damascus into a fortress or Syria into an army base. Iran sent Iranian Revolutionary Guards Corps officers to Syria to train and advise the Syrian Arab Army. They are the equivalent of special ops. It is likely that there aren’t more than a couple of thousand Iranian military personnel in the country. Iranian officers have died at such a rate that they must have been in the field leading Hizbullah and Iraqi Shiite militias rather than only in the barracks doing training. There are estimated to have been as few as 500 Iranian personnel killed in Syria despite the big battles at places like Aleppo, and so there just can’t be very many Iranian troops fighting there. Of the couple thousand, a substantial number appear to be Afghan refugees in Iran who were pressed into service on pain of being sent back to Afghanistan.

This tiny rag tag force helped make a difference for the al-Assad regime in fighting Sunni rebels who have only light to medium weaponry. But it isn’t the kind of force that offers a significant threat, or a threat at all, to Israel. Even when al-Assad had 300,000 men under arms and a proper army and good Russian tanks, no one thought Syria was a serious challenger to Israeli military might. what about now, when it has been devastated by civil war.

Third, Iran is very unlikely to be building missile factories in Syria and Lebanon, and Netanyahu just asserts these things rather than giving any evidence for them. He is a one man walking fake news. Israel has several hundred atomic bombs and the means to deliver them, and Iran is not so crazy as to send a missile against Israel.

Likewise, Hizbullah, of which Netanyahu is so afraid, is just a regional militia. It has no armor to speak of and no air force.

The only reason for Netanyahu to be afraid of Hizbullah is if he wanted to invade Lebanon and/or Syria. It would put up a good guerrilla defense, as in 2006. But it isn’t capable of offensive action against the Israeli army, the best-equipped military in the Middle East.

Netanyahu is actually just using the alleged Iranian bogey man to take the spotlight off his own aggressive military actions against Palestinians in the West Bank, whom he is gradually expelling from their property.