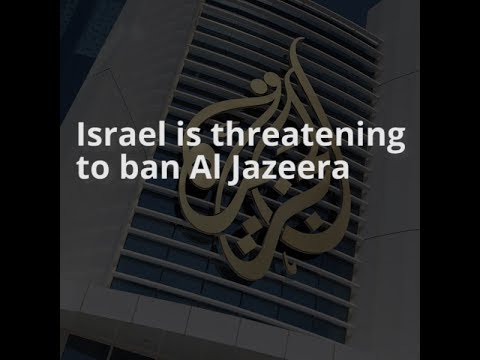 RAMALLAH (Ma’an) — The Federation of Arab Journalists (FAJ) condemned the Israeli government’s decision to shut down the office of Qatari news channel Al Jazeera in Jerusalem, expressing solidarity with Al Jazeera staff in the Palestinian territory.

On Aug. 1, Israeli authorities revealed that they had launched official discussions aimed at drafting a bill that would force the closure of Al Jazeera in Israel.

Communications Minister Ayoub Kara said at the time that “professional discussions” were underway in order to draft a bill that would shutter the award-winning news network.

Israeli Prime Minister Benjamin Netanyahu has also blamed at Al Jazeera for deliberately “inciting violence” at the Al-Aqsa Mosque compound for its coverage of events there in July, and demanded that Israeli authorities shutter their offices in Israel.

On Sunday, Kara said Israel was planning to revoke the press credentials of Al Jazeera journalists and pulling the news channel from the air in Israel, a move Netanyahu saluted on Twitter by saying that the minister was “following my guidance…to end Al Jazeera’s incitement in Israel.”

The FAJ called the Israeli decision a severe violation of freedom of speech and freedom of the press, which will have a dangerous impact on the public’s right to be have access to differing points of view on the news, particularly with regards to the Israeli-Palestinian conflict.

The organization called on the International Federation of Journalists (IFJ) to immediately intervene and exert pressure on the Israeli government to halt its procedures against Al Jazeera and to hold Israel accountable for violating international law.

The FAJ said Israel’s targeting of Al Jazeera was part of a broader escalation of measures targeting journalists and the media, adding that the moves were politically motivated and were unrelated to claims of stopping “incitement.”

Al Jazeera has also denounced the attacks, adding that it would seek legal means of staving off attempts to shut the channel’s office down, The Times of Israel reported on Sunday.

“Al Jazeera deplores this action from a state that is called the only democratic state in the Middle East and considers what it has done is dangerous,” an unnamed official from the Qatari news outlet said.

Israel’s calls to close Al Jazeera are not new, as several attempts have been made in the past to shut down the network over its focus on Israel’s activities in the Palestinian territory, which Israeli authorities have deemed amounts to “incitement” against the Israeli state.

The proposed Israeli bill targeting Al Jazeera comes amid a diplomatic fallout between Saudi Arabia and Qatar, with Saudi Arabia and several other countries severing ties with Qatar in an effort to isolate the country and enforce several demands on the Qatari government.

The main demand is that Qatar halt its funding to armed groups in the region, an allegation Qatar has consistently denied.

Several countries have already shuttered Al Jazeera’s offices, including Saudi Arabia, Jordan, and Bahrain — all of which are monarchies that have little to no press freedoms — and Egypt, which Reporters Without Borders have called “one of the biggest prisons for journalists.”

Analysts have pointed out that Arab nations have provided Israel with the perfect political climate to go forward with their longstanding inclination to pull the plug on the network.

Others have pointed out that Al Jazeera has provided an important platform for Palestinian voices, which are often marginalized by Israel’s influence over international media, and for stories exploring the effects of Israel’s half-century military occupation of East Jerusalem, the West Bank, and Gaza.

Some have pointed out the irony of the so-called “only democracy in the Middle East” shutting down a news network at the behest of a monarchy ruled by a royal family that is routinely accused of human rights abuses, and whose citizens have no basic rights of expression or press freedoms.

Meanwhile, Israel has also come under fierce criticism in recent weeks for its attacks on Palestinian journalists and media institutions amid two weeks of protests around Israeli restrictions on Al-Aqsa.