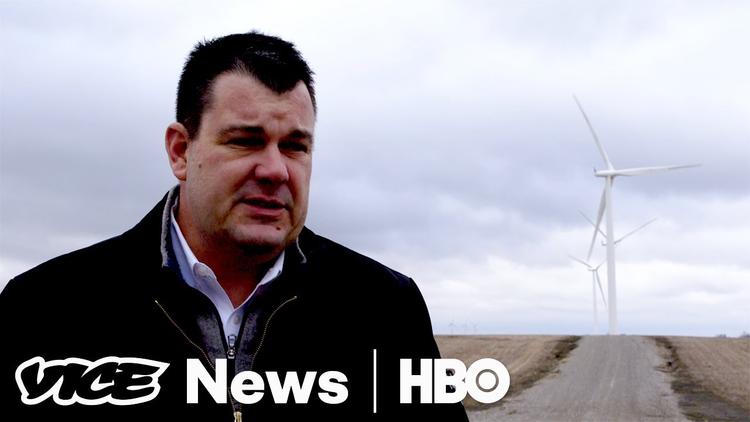 CBS News reports that jobs in the wind energy field will grow 108 percent in the next 7 years. Working on wind turbines, in short, is the fastest-growing job sector in the United States now and in the foreseeable future.

One of the characteristics of wind turbines is that they can be refurbished and software can be installed in them to improve their integration into the grid. Alete is putting $80 mn into refurbishing 350 turbines in Minnesota and Iowa. That project translates into jobs.

Wind produces 37% of Iowa’s electricity, contributing to a steep decline in the state’s dependence on coal (though it still uses too much coal).

About 17% of Minnesota’s electricity comes from wind.

Most of this wind generation capacity was added in just the last decade.

Xcel is busy adding 11 new major wind farms, totaling 3,400 megawatts of capacity, and wind will account for 34 percent of its electricity generation mix by 2021, up from 19 percent now.

All this is one reason that coal jobs are not coming back, no matter what that blowhard Trump says. On the other hand, a lot of coal workers will be retrained to work on wind turbines. China has a program to help Wyoming coal workers make this transition.

In California’s poverty-stricken ‘Inland Empire’ region alone, green energy since 2010 has generated 36,000 jobs and $9.6 billion in business investment. Riverside and San Bernardino counties are among the smoggiest in the state, so moving to renewables will not only benefit the economy but will also combat respiratory and heart disease produced by breathing air polluted by coal and gas emmissions. Not to mention that those emissions are producing global heating that could threaten California’s prosperity.

Nation-wide, the electric power industry directly employs 2.66 million workers, and indirectly supports 7 million US jobs. It adds $880 billion to our gross domestic product annually, which amounts to 5% of the whole. Much of the system needs to be redone, which is a labor-intensive project.