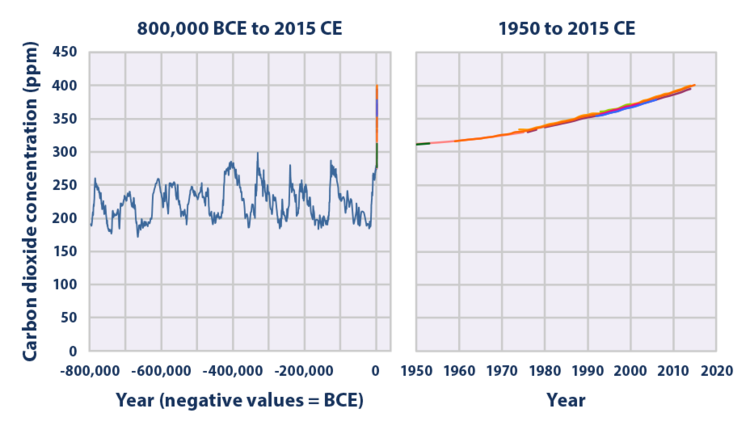 The images from Houston and its environs are heart-breaking and we at IC wish all those affected a speedy and safe return to normality.

Extreme weather events are associated with climate change, and whenever they occur, they raise the question of their relationship to that process.

Human-induced climate change did not “cause” Hurricane Harvey. There have after all been hurricanes in the Gulf of Mexico all along, and some of them have been monstrous. So can we relate Hurricane Harvey to human pumping of carbon dioxide and methane into the atmosphere by driving cars, heating or cooling buildings, etc.?

The answer is “yes.” Climate change did not produce Harvey the Hurricane, but climate change made Harvey worse than it would otherwise be. Maybe 30% worse. That is, if Harvey dumps 4 feet of water on the Houston area in 2017, that suggests it would only have dumped 2.64 feet of rain if it had arisen in the 1749 hurricane season when Spanish settlers in Texas made peace with the Lipan Apache tribe.

That is because in 1749, there were 270 parts per million of carbon dioxide in the atmosphere and today there are 410 ppm of CO2. The parts per million of carbon dioxide in the atmosphere have fluctuated between 200 and 270 for the last 800,000 years . Homo Sapiens Sapiens is only about 200,000 years old, so this is the only climate we’ve ever known. Starting in the late 1700s, human beings started behaving like a global bank of super-volcanoes, spewing greenhouse gases into the atmosphere faster than had ever occurred in the history of the earth. Hundreds of billions of metric tons of carbon dioxide, through the burning of massive amounts of coal, as well as petroleum and natural gas. Ordinarily, going from 270 ppm of CO2 to over 400 would take millions of years of heightened vulcanism. 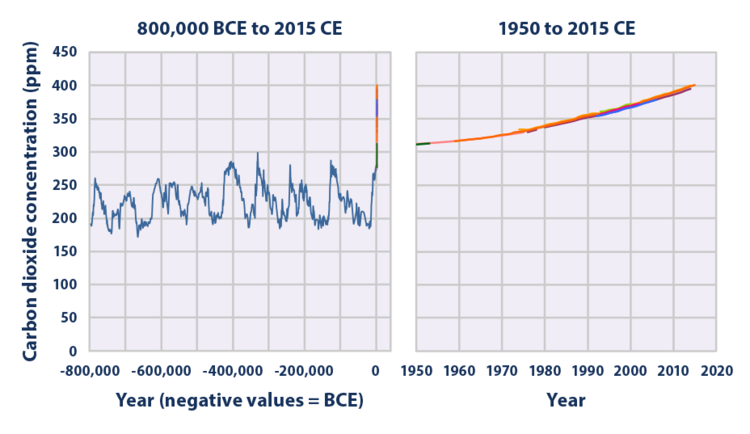 One of the foremost experts in climate science, Professor Michael Mann of Penn State, explained how human-caused climate change made Harvey worse:

1. The sea off the Texas coast is half a foot higher than it used to be, because of global heating. Hotter water expands to fill more space, and melting surface ice that used to be on the land mass of Antarctica and Greenland and is now in the oceans as extra water and caused the sea level to rise. (The level of the land can also be lowered by e.g. drilling for oil). When the sea level is higher, that allows higher storm surges, leading to extra flooding.

3. The water in the Gulf of Mexico is warmer than a few decades ago, and warm water feeds hurricanes the way anger feeds the Incredible Hulk. Harvey was significantly more intense as a storm because it developed over warmer water.

These three causes are rock solid and without much doubt about them.

Mann points to a couple of other likely but not certain ways global heating made Harvey worse.

4. Climate Change contributed to a stronger high pressure system in the Gulf of Mexico, which pushed the jet stream north and allowed Harvey to malinger in Houston’s area instead of being pushed away by strong winds from dry land. The winds were left weakened by the migration north of the Gulf Stream.

5. Global heating seems to contribute to longer-term stationary weather patterns. Thus, the long-term drought in the US Southwest was exacerbated by this tendency. Harvey might not have stayed where it was so easily without climate change.

Mann’s conclusion that climate change made Harvey worse is chilling. Because we’re only at the beginning of global heating. There is a long lag between the time you burn the coal and the time the surface of the earth heats up (we are talking about average temperatures, and the oceans are cold and heat up very gradually). We are already locked in to going up another 2 degrees Fahrenheit, and now with Trump and Scott Pruitt turning the US into one big bonfire, we’re probably going up 4-5 degrees Fahrenheit. That amount of global heating could be catastrophic. The jury is out on whether much hotter oceans will produce more hurricanes or not. What is certain is that the ones that are produced will be much more intense.