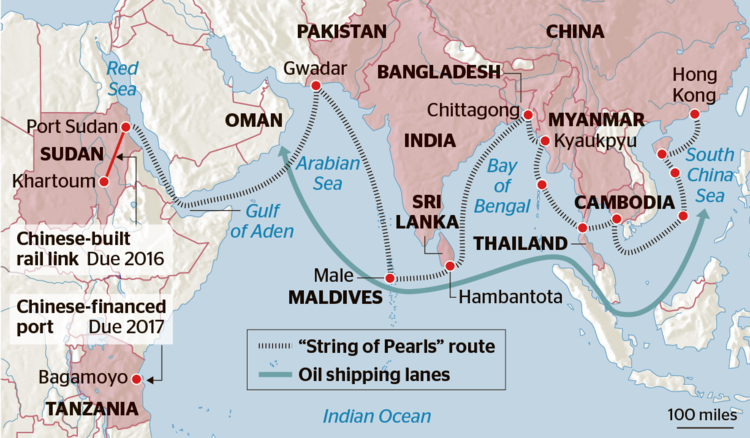 China has just inaugurated its first military base abroad, in the tiny Red Sea country of Djibouti. Beijing has a long way to go to catch up with the United States, which is estimated to have some 800 military bases around the world. In fact, you will not be surprised to discover that the US already has a base in Djibouti, Camp Lemonnier. So too do Japan and France. Djibouti had been an Ottoman possession until the late 19th century and then was made a colony by France, becoming independent in 1977.

Still, the Djibouti base is a milestone in the gradual emergence of China as a great power, coming as it does after the commissioning of their first aircraft carrier battle group. I lived in the Horn of Africa in my teenager years, in Asmara (then in Ethiopia; it is now, after a bitter war of independence, in Eritrea). Asmara was then an inland port for the seaport of Massawa. If you follow the coast south from Massawa, you get to the next country over along the coast, Djibouti. Then you get to Somalia. The three of them hog the shore, leaving the big country of Ethiopia (population 90 million) landlocked. Because of severe and long term frictions between Ethiopia and Eritrea, the Ethiopian elite in Addis Ababa stopped trusting Massawa as their port and turned to Djibouti. This development killed the Eritrean economy (along with one of the worst ruling classes in the world). Eritrea’s bad fortune is Djibouti’s good fortune.

Djibouti is about the size of New Jersey or New Hampshire with regard to area, but it has a little less than a million people, around the population size of South Dakota.

Just off the Djibouti coast lies a huge international sea route through which 10 percent of global trade goes. Because international fishing operations have depleted fishing grounds off Somalia, depriving local fishermen of their livelihood, some of them turned to piracy. Across the Gulf of Aden in Yemen, some al-Qaeda cells have also sometimes attacked naval vessels.

China was asked by the UN Security Council to play a part in the naval policing of this corridor and in fighting piracy and terrorism. Xinhua News Agency explained of the People’s Liberation Army base last week: “It will fulfill China’s international obligations regarding humanitarianism aid and escort missions in the Gulf of Aden and waters off Somalia. The PLA support base in Djibouti … will be conducive to China fulfilling its international commitments.”

There is, as usual in these matters, a strong economic underpinning to China’s new military base. Since Djibouti has become the port of choice for Ethiopia, it has received enormous investments in infrastructure. It already receives 15,000 containers a year, and this number is set to increase substantially. China has made major investments in Port Doraleh, a major container port there, as a conduit for African raw materials to China’s hungry factories, and for Chinese manufactured goods to Africa’s markets. China also built an electric rail link from the Ethiopian capital of Addis Ababa to Djibouti, turning the trip into a 12 hour journey; it had been four days by truck.

China sees its new outpost in Djibouti as part of its globe-spanning New Silk Road international trade project. There is an overland Silk Road through Central Asia and Iran to Europe (Syria may be incorporated into it).

Then there is a maritime Silk Road, including East Africa. These new transportation routes ramify from China and depend on new rail links and ports that will make trade easier and less expensive, in hopes of increasing its volume.

The Chinese are of course also very interested in raw materials. But they have a world-commerce model. Their focus is on increasing the volume of trade in both raw materials and manufactured goods.

When is the last time the US or a US concern built an railroad in Africa? China has just built three, in different parts of the continent.

That is, Trump’s pledges to rebuild US infrastructure only focused inside the US, and while the good Lord knows that US bridges and other facilities need investment, that project would not necessarily increase US gross domestic product. Trump in any case will likely renege on this pledge, as he has reneged on most of his others.

China is not only investing in its own infrastructure, it is investing in that of Ethiopia, Kenya, Nigeria, Pakistan, etc. etc. Its leaders are convinced that the resulting increase in volume and velocity of world trade will benefit China. Security is only one of many planks for the Maritime Silk Road project. Things like sustainable, green development, innovation, cooperation in exploiting marine resources, and combating climate change are central to China’s goals. Trump and the US elite want to disregard climate change in order to make a few final billions from fossil fuels.

The investment in local infrastructure differentiates China’s base from Camp Lemonnier. The US has a raw material security model for bases. They are there to protect US access to oil and other primary commodities. You see the difference in Pakistan, where the US invested $8 billion but mostly just sold them American weapons. China is building them solar farms and railroads. The US has a primitive, nineteenth-century notion of imperialism as claiming someone else’s resources and then standing over them with a gun. Trump epitomizes this philosophy when he says that the US, having invaded and occupied Iraq, “should have taken their oil.”

China is up to a different sort of great power model entirely. This is why Jack Ma, the CEO of Alibaba and one of the richest men in the world, expressed amazement and dismay that the US had wasted trillions on wars when it could have been investing the money in expanding its economy.