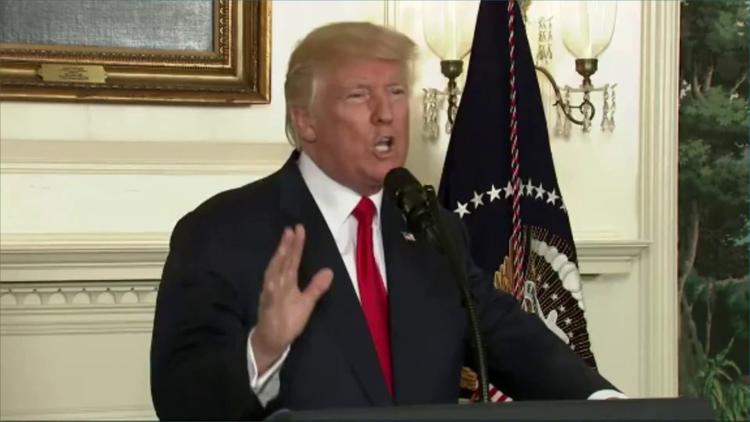 Trump finally came out, two days late, to denounce explicitly and by name the hate groups who organized an invasion, hundreds-strong, of little Charlottesville, VA (pop. 46,000) on Saturday.

While the statement will take some of the political pressure off the president, it will be dismissed by most Americans as too little, too late and at worst insincere.

The difficulty Trump faces is that his initial reaction, on Saturday, in which he blamed “many sides” for the violence, was clearly spontaneous and represented his first gut reaction. He thinks that liberals, Blacks and Mexicans were as guilty as (or more so than) Steve Bannon’s Alt-Right, the Nazis, the KKK, the bikers, etc. I.e. the White Nationalists who have killed the majority of of those killed in domestic terrorist incidents during the past decade in this country.

Immediately after his pro forma, prepared statement (which carefully avoided mentioning the ‘Alt-Right’), Trump’s staff leaked his alleged plans to pardon Sheriff Joe Arpaio of Arizona. Arpaio was notorious for his profiling-based unconstitutional round-ups of immigrants. When a court ordered him to desist, what with the fourth Amendment and all, he went on with his round-ups, and so was convicted of criminal contempt of court.

Likewise, Trump has not backed off building his wall.

He hasn’t apologized for calling Mexican-Americans rapists and criminals.

He hasn’t apologized for his years-long public campaign to denigrate Barack Obama as not an American citizen.

He hasn’t backed off his bizarre Muslim visa ban.

In the end, there is one reason that Trump cannot heal the country, cannot properly eulogize Heather Heyer, who died for her anti-hate activism.

Because Trump, based on his public statements, would have been a perfectly plausible attendee of the Unite The Right rally in Charlottesville last Saturday.