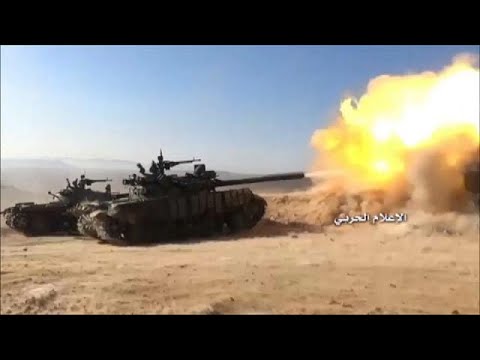 The Lebanese Army has mobilized to clean out an ISIL enclave in a mountainous region on the border with Syria, Jurud al-Qaa and Jurud Ra’s Baalbak. Some 600 ISIL terrorists had controlled about 36 square miles in the hills, but already on late Saturday, one day into the offensive, the Lebanese Army announced it had taken back 12 sq mi.

US Special Operations forces are likely giving support, short of war-fighting, to the Lebanese Army in this operation.

An army spokesman said that the troops had killed 20 ISIL fighters with artillery fire and airstrikes but that 10 Lebanese troops had been wounded, as well, one of them seriously. This engagement is the first in history where the Lebanese army is coordinating a land offensive with air support.

In 2014, ISIL had struck into the nearby town of Arsal and captured some 30 Lebanese soldiers. The current operation hopes to recover and release any who are still alive. ISIL has continued to launch attacks on Lebanese army personnel in the eastern region from its redoubts in the hills.

ISIL or Daesh has not been able to establish any other toehold in Lebanon, a largely tolerant multi-cultural society where Sunni Muslims (the group ISIL targets for propaganda) are a minority. ISIL’s occupation of a patch of territory in Lebanon was facilitated by its position on the Syrian side of the border, and by the inability of the Syrian Arab Army to dislodge the militants.

The Lebanese officer corps is heavily drawn from the ranks of Christians and from Druze (a medieval New Age offshoot of Shiite Islam). ISIL has specialized in attacking Christians and other religious minorities, so the Lebanese army has every reason to want to kill or capture those 600 ISIL fighters who menace eastern villages. The president of the country, Michel Aoun, is a former general who now has an informal alliance with the Shiite party-militia, Hizbullah.

In a separate and uncoordinated effort, Hizbullah and the Syrian army have launched an anti-ISIL operation on the Syrian side of the border, in the western Qalamoun mountains. Although the Lebanese Army does not want openly to coordinate with Hizbullah for fear of attracting the ire of the peculiarly pro-Israel US congress and of endangering US military support, it is likely that there is some joint planning. Without the Hizbullah/ SAA operation on the Syrian side of the border, the ISIL fighters in Lebanon could just have faded away to fight another day. As it is, they are caught in a pincer movement from both sides of the border.

Some ISIL forces on the Syrian side had already surrendered by Saturday evening.

Hizbullah last month had successfully defeated the al-Qaeda-linked Syrian Conquest Front (formerly Nusra Front) near Lebanon’s Arsal, and thousands of local residents were transferred up to Idlib province as a result.

Although Trump had pledged to “carpet bomb” ISIL, it is actually being rolled up on the ground by local troops doing hard fighting, including the Lebanese.