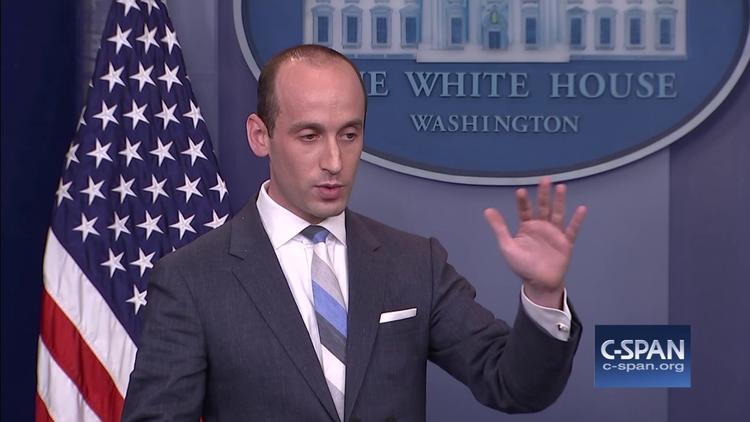 Many of the reactions to Stephen Miller’s announcement of Trump’s proposed immigration policies have pulled at the heart strings. People on social media have been remembering their own grandparents, who came to the US without knowing English and without higher degrees but made something of themselves. It turns out that Donald Trump’s own mother grew up speaking Gaelic in a Scottish village and knew little English before she came to the US. I can’t imagine that Trump’s German grandfather knew English before arriving, either, and it is not as if he had a degree or anything. Miller’s grandparents came in the same way in 1902.

But arguments from the heart will not be persuasive to the Trump voters or most of the Republican Party.

Here I’d like to set aside those considerations, of fair play and appeals to emotion and make a different set of arguments about the plan presented. What would it mean for American power in the world?

1. Sen. Tom Cotton, who spent years as a notorious illegal alien in Iraq, said that the US admits about 1 million legal immigrants a year, phrasing it as “an Arkansas every three years.” This argument is, like most of Cotton’s rhetoric, full of fallacies. First of all, the magnitude of the immigration is not important in and of itself. Arkansas is population-wise a small state mainly because it does not have a very good economy. It is 49th in the country for median household income. Its work force is only 3% agricultural, but whatever else they are doing does not appear to pay very well and maybe doesn’t generate a big demand for workers. Arkansas largely lacks what economists call absorptive capacity, States that do have a good economy might be able to absorb that many immigrants, indeed need that many immigrants to continue to grow. Again remember that they are less expensive than babies. Someone else has already paid for their basic education. They arrive ready to work and pay taxes and social security, and to serve in the military. Whether it is good or bad to bring in a million immigrants a year or a population increase from that source of 0.31% annually (not counting their natural increase once here) can’t be decided by mentioning the absolute number.

2. The fertility rate in the United States is collapsing and we may be on the verge of a demographic crisis.. Women in their teens and early twenties, i.e.Generation Z or Centennials, stopped having children at the rate of the predecessors. If they have postponed childbirth, then the alarm may be a blip. But if this development is a sea change, and Trump stops immigration, then the US will gradually shrink, as Japan is expected to. In 2007 we had 4.4 million live births. Last year it was 3.98 mn. And remember you have to subtract the death rate. These are complicated calculations since immigrants tend to come as adults. I don’t think Cotton has carried them out.

So actually we may need those 1 million immigrants every year to avoid shrinking and losing our status as a Great Power. Or as we will see, we might need them to compete with populous emerging Great Powers.

3. Shrinking would be bad, very bad, from the point of view of geopolitics. I know it could have benefits environmentally, but Cotton does not care about that anyway. Let us argue to someone who cares about American power. How big a population a country has tells you how big an army it can raise. It tells you how many workers it can put to work if it has the factories or laboratories or fields to employ them.

The rising powers in the world are China and India, both with over a billion in population. As they catch up technologically to the US and that advantage falls by the wayside, the sheer size of army they can deploy becomes crucial. The US at a dinky 320 million is only not at a disadvantage now because of that technological advantage.

4. Consider the fate of Japan, which will shrink from 130 million to 90 million over the next few decades. Who will pay into social security? How seriously can the world take a country dominated by little old retired people? Who will serve in the 100,000 strong Japanese Self-Defense Force? How innovative will Japanese science and engineering be under these circumstances? Who will work in factories and make Toyotas? You’ll say they can site the factories in Vietnam, but why shouldn’t Vietnam over time just make its own car? And who will buy Japanese-made goods at home? How to have an economy with only a geriatric consumer base? I once jokingly advised a friend to invest in whatever corporation makes the most popular adult diapers. He was grossed out.

One of the reasons Russia is acting so weird is that it imploded as a Great Power. Half the population of the Soviet Union hived off into new republics. Of the 150 mn. Russia was left with they lost 10 million to over-drinking, suicide, depression and a collapse of the birth rate. Losing the Cold War was hard on them. White Supremacy ironically could push the US into a disaster similar to that of Russia’s after 1991.

5. As for admitting only people who speak English and have higher degrees, this idea is based on yet another set of fallacies. Working class immigrants in the United States generally do not compete with native-born workers for jobs. They occupy different niches. In part this is because the immigrants don’t have good English.

So guess what. If you go down to admitting 500,000 educated English-speakers a year, you may a) produce the Japan effect of decline, 2) you will cut out the ability to harvest strawberries, and 3) you will actually start bringing in many more immigrants who can compete for jobs against native-born Americans.

6. CNN’s Jim Acosta accused Stephen Miller of a Whites only immigration policy, saying he was angling only for Australians and British. The charge is actually probably true, but like most racist immigration policies, it would get subverted.

The fact is that not very many people immigrate to the United State from developed countries like Britain or Australia. So you know what would happen if this law were passed in the form reported by Miller?

Desi paradise. The largest pool of English-speakers with BAs and higher degrees recognized by the United States lies in Pakistan, India and Bangladesh. From each according to current law up to 25,000 can come each year, not counting later loved ones who join them. The next largest pool is former British Africa– Nigeria, Kenya, South Africa, etc. etc.

I hear Steve Bannon doesn’t like Indian-Americans and once asked of Silicon Valley, ‘Why are these people here?’ Bannon and Miller have managed to craft an immigration proposal that would replace Central Americans and Mexicans with highly skilled Indians, Pakistanis, Bangladeshis, Nepalese, Sri Lankans, and huge numbers of people from African countries. Remember, unless they change it, up to 25,000 can legally come from each of these countries annually. They’d get that many qualified applicants from 20 Commonwealth countries annually without any difficulty. India’s middle class just doubled to 250 million or so and is set to double again by 2025. You think they’d even miss 250,000 if they came over the next 10 years?

Here are the English-speaking Commonwealth countries whose degree holders Miller and Bannon and Sessions want to import wholesale. More bad news for Bannon and Miller: A lot of these countries are Muslim-majority or Buddhist or Hindu, or have large Muslim minorities (who might have a special reason to want to leave).

So I really don’t think this outcome is the one the Trumpies were going for. But some other time I’ll tell you how our current system was crafted by Southern white supremacists in Congress and how reality subverted their white bread designs.

monarchies with heads of state other than the Reigning Monarch of England: