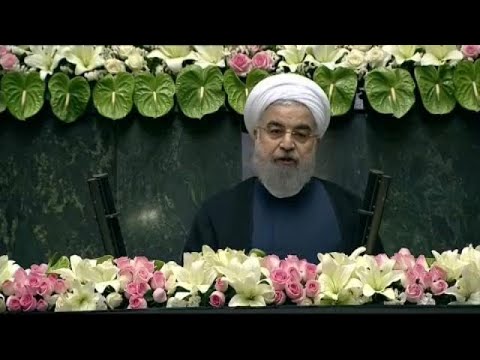 Iranian President Hassan Rouhani, who was inaugurated for a second term on Saturday, has accused the United States of trying to undermine Tehran’s nuclear deal with world powers, and called for more negotiations amid new U.S. sanctions.

Rouhani won his re-election after promising to “open Iran to the world” and create more jobs. The deal he championed in his first term with the United States and five other major powers in 2015 led to the lifting of most sanctions against Iran in return for curbs on its defensive nuclear program.

“The U.S.’s repeated violations of its commitments and the new sanctions it imposed on Iran have left a negative impact on Iran’s public opinion, and can hamper implementation of the nuclear deal,” Rouhani was quoted as saying by Tasnim news agency in advance of the ceremony.

Iran has said the new U.S. sanctions break the terms of the nuclear deal and has vowed a “proportional” reaction.

At his inauguration, Rouhani said Iran would continue to abide by the terms of the deal as long as other signatories do the same. “Today is the time for the mother of all negotiations, not the mother of all bombs,” he said.

Among the guests for Rouhani’s inauguration on Saturday were Federica Mogherini, the European foreign policy chief who has pledged to continue building ties with Iran despite mounting pressure from the United States to keep the country isolated.

“All sides have a heavy responsibility to safeguard this agreement which was achieved by a lot of effort,” Rouhani said when meeting Mogherini before the ceremony.

Iranian Foreign Minister Mohammad Javad Zarif said Trump was “trying to destroy the nuclear accord at Iran’s expense, and Europe should be conscious of this,” as quoted by Tasnim.

EuroNews: “Iran: Rouhani lashes out at US as he is sworn in for second term”