A draft report on the current impact of global heating on the United States, produced by 13 Federal agencies, has been leaked to the New York Times. The scientists who leaked it are afraid that the anti-science Trump administration will suppress the findings to help its friends in Big Oil.

One of its central findings is that man-made climate change (driving your car, air-conditioning your house on fossil fuels so that you release toxic CO2) is already having an impact on the United States. For instance, the West is hotter, which exacerbates droughts.

One of the findings that alarmed me is that just in the next few decades average temperatures in the US will go up 2.5 degrees F. But by 2100, only 80 years from now, the average temperature will be 5 to 8.5 degrees F. higher! Remember, average surface temperature includes the cold Great Lakes and cold North Dakota. So in any particular place, say Savannah or Atlanta or Phoenix, the temperature could go up even higher than 8.5 degrees F. The scientists are saying that unusual record temperatures will become normal. Some whole cities (we’re looking at you, Tucson) could become uninhabitable in the old age of my grandchildren! 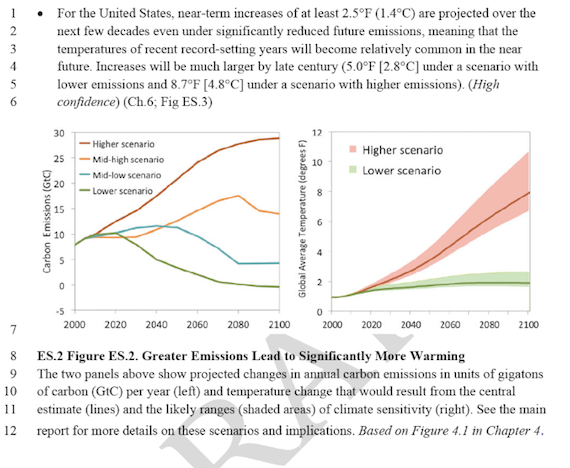 “The world has warmed (globally and annually averaged surface air temperature ) by about 1.6 °F (0.9°C) over the last 150 years (1865 – 2015), and the spatial and temporal non-uniformity of the warming has triggered many other changes to the Earth’s climate.

*Evidence for a changing climate abounds, from the top of the atmosphere to the depths of the oceans.

*Thousands of studies conducted by tens of thousands of scientists around the world have documented changes in surface, atmospheric, and oceanic temperatures;

*as well as the warmest years on record for the globe.

In the beginning of the Executive Summary, the government scientists have managed to refute all the talking points of their current ignoramus or venal bosses, Donald Trump and Scott Pruitt. And a simple little chart shows that the idea that there hasn’t been dramatic heating already (especially in the American West) is daft:

The report is good on regional differences. The US Northeast has had an unusual amount of heavy precipitation lately. These extreme rain events and the consequent danger of flooding will increase.

The oceans around the US are rising, warming and becoming more acidic. You take a Gulf coast fishing town and this is bad news. The town itself could be flooded out and disappear. Warmer Gulf waters mean more extreme hurricanes, so it could be leveled. And an acidic ocean will kill off a lot of the fish on which they depend.

The report is concrete, careful and scarier than any horror movie you’ve ever seen. It gives upper and lower estimates, depending on whether humankind gets its act together. Given the oil-drenched buffoons now in charge, you’d want to bet on the higher and more dangerous numbers in each case.

Let’s see if my coding abilities are up to embedding the report here: