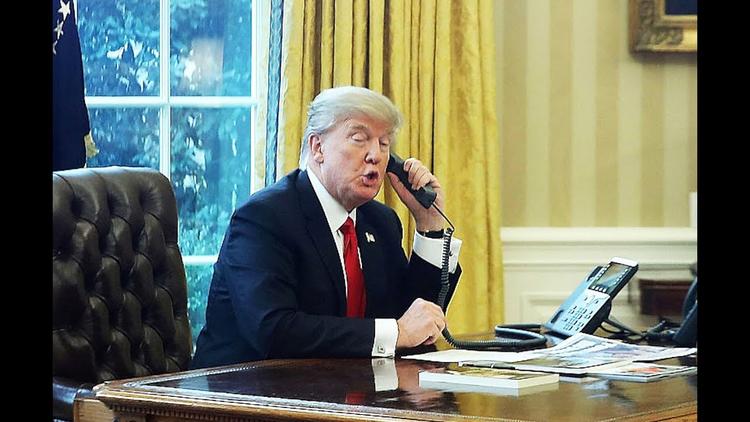 Trump told the Mexican leader that they were both in a bit of a political bind due to Trump’s campaign pledge to build a massive wall to prevent illegal immigration and have Mexico foot the bill, according to a transcript of a phone call shortly after Trump took office in January.

But “if you are going to say that Mexico is not going to pay for the wall, then I do not want to meet with you guys anymore because I cannot live with that,” Trump warned.

While Trump has repeatedly insisted that Mexico would pay for the wall, he has provided few details about how that would be done.

According to transcripts obtained by the Post, the exchanges came in back-to-back calls that Trump had with Peña Nieto a week after taking office.

“Believe it or not, this is the least important thing that we are talking about, but politically this might be the most important,” Trump told his counterpart.

Meanwhile, the Mexican government denied that Peña Nieto telephoned Trump to offer his congratulations for his hardline immigration and border policies.

The allegation that Peña Nieto phoned Trump emerged when the U.S. head of state claimed that he had received a congratulatory call from his Mexican counterpart about his policies, according to the Independent.

While swearing in John Kelly — a former four-star general and secretary of homeland security — as his new chief of staff, Trump commented, “At Homeland, what he has done has been nothing short of miraculous.”

Trump added, “As you know, the border was a tremendous problem and they’re close to 80 percent stoppage. And even the president of Mexico called me — they said their southern border, very few people are coming because they know they’re not going to get through our border, which is the ultimate compliment.”

However, Mexico’s Foreign Ministry released a statement denying that Peña Nieto had “recently spoken to President Donald Trump over the telephone.”

The official document said, according to the Associated Press, that the only other time the two men had met and conversed was at the G20 Summit.

“During the meeting, the two heads of state held last July 7 in Hamburg, Germany, the topic of migration was a topic of conversation approached by both. President Peña Nieto shared that repatriations of Mexican nationals from the United States had fallen 31 percent between January and June 2017 in comparison to the same time-frame in 2016,” the statement noted.