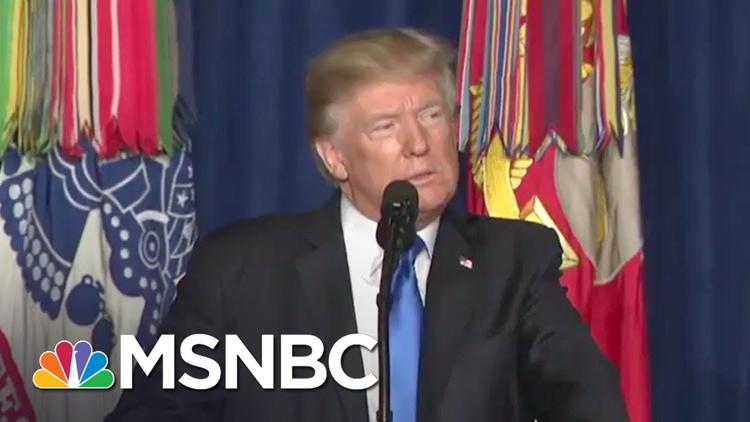 The 16-years-long Afghanistan War has bedeviled Washington decision-makers since the US invasion of fall, 2001, which came in response to the attacks of September 11.

In his speech on Monday night, Trump was primarily attempting to manipulate American domestic politics. He was trying to look presidential and play the patriotism card after he called Neo-Nazis and KKK members in Charlottesville very fine people. Almost nothing he said about Afghanistan and South Asia made any sense, and of course Trump does not know anything about any of those subjects. His military advisers only know these subjects through the lens of military action, which isn’t very helpful if the problems are cultural.

It is a low-risk strategy. I don’t find the American public interested in Afghanistan in the least. The US media does not much cover that war and announcements of US troop deaths are carried on page 17 of the newspapers. So Trump can shift the focus to foreign policy without risking a backlash.

Secretary of Defense Jim Mattis once said it is fun to shoot Taliban. He is in for a lot of fun.

Trump depicted the radical groups in Afghanistan as dangerous to the United States. This assertion is probably incorrect. It is true that, as Trump said, the 9/11 attacks were planned out by Usama Bin Laden, Ayman al-Zawahiri, Khalid Shaikh Mohammad and other al-Qaeda leaders in Afghanistan. But they were also planned out in Hamburg, where al-Qaeda had the good fortune to recruit some high-powered engineers. They were not planned out by the Taliban, whose leaders probably did not even know about the plans to attack the United States. In the aftermath Taliban angrily denounced Bin Laden as having provoked a foreign occupation of their country.

That al-Qaeda had training bases in Afghanistan was important to their movement, but those bases wouldn’t have been much use if the American airlines did not have shoddy security precautions against hijackings. Jet planes are enormous bombs and it was only a matter of time before someone figured out how to use them as such. Likewise, mistrust between the CIA and the FBI caused two of the hijackers, who had been under surveillance at an al-Qaeda summit in Kuala Lumpur but then entered the US and settled in San Diego, to fall between the cracks.

And, of course, al-Qaeda would not have existed at all if Ronald Reagan had not encouraged a private army of Muslim fundamentalists and tribal forces to attack the Communist government of Afghanistan in the 1980s. And that government wouldn’t have been there, in all likelihood, if Leonid Brezhnev of the Soviet Union had not invaded and occupied the country, which began its long-term destabilization.

In short, the US probably does not need to stay in Afghanistan to ensure that America is not attacked from that country again. The obverse is that being in Afghanistan does not protect the US from attacks hatched elsewhere, including possibly in Europe itself. The main point is that the US needed better security at point of use in dangerous systems such as the airline industry.

Still, for ISIL or al-Qaeda to reestablish training camps in Afghanistan would be a highly negative development. Such camps would be difficult to discover and bomb from the air, if the US withdrew, since it would need to fly missions against them from aircraft carrier battle groups in the Gulf, and would need overflight permission from Pakistan or Iran.

As for why the Taliban in particular have made a comeback and may control a third of the country, there are some basic reasons for this, some of them explained by Sarah Chayes, who knows more about the real Afghanistan than the entire US government.

First, Afghanistan is desperately poor. It is one of the 25 poorest countries in the world. Despite the fake news sometimes put out from DC think tanks, it has virtually no natural resources of any value. Its population is still largely agricultural but much of the country is arid. This poverty contributes to a weak government that does not raise enough in taxes to mount a proper government. If it weren’t for foreign aid, Afghanistan could not afford to pay its tens of thousands of troops and police. Low salaries and salary arrears encourage corruption. Dire poverty does not necessarily turn a country into a failed state. Senegal does better than Afghanistan. But it is a strike against the country and hard to overcome.

Second, its high rates of population growth often outstrip economic growth, so that per capita income is actually declining.

Trump’s determination not to do nation-building differs little from the actual US policy of the past 16 years, which is to put much more money into bombs than into the country’s economic development. Since lack of development is a big driver of the failed state and of guerrilla violence, giving it up won’t be helpful.

Third, as noted above, its government is extremely corrupt. Officials prey on people, steal land and other resources from them, and generally act like a plague on the land. Warlord rule is common, i.e. rule by what are essentially violent mobsters. This extreme corruption drives some of the population into the arms of the Taliban, who are fanatical puritans and who do lay levies on people, but are for the most part not personally corrupt.

Fourth, Afghanistan has some deep ethnic divides. Some 40% of the population is Pushtun. They speak Pashto and practice a relatively strict form of Sunni Islam. They are the potential constituency for the Taliban. Another 22% or so is Hazara Shiites, who speak Dari Persian and have the same form of Islam as neighboring Iran. Ten percent are Uzbeks, who speak a Turkic language and practice Sunni Islam, though many of them are secular-minded as a result of the influence of neighboring Uzbekistan. Most of the rest are some form of Tajik, Sunni Muslims who speak Dari Persian. Tajiks are disproportionately urban and literate and often fill government offices, to the annoyance of the rural and tribal Pushtuns.

As Sarah Chayes has pointed out, deep ethnic divides and hatred exacerbate public reaction against corruption. If a Tajik governor of a province is stealing from Pushtuns, the latter may well turn to the Taliban for protection.

The Western Pushtuns have never bought into the US-established government in Kabul, which has all along had a strong element of the Northern Alliance (Tajiks, Hazaras and Uzbeks) who had fought the Taliban in the 1990s. Last I knew, 2% of the army is from Helmand and Qandahar provinces, Pushtun strongholds.

Sixth, outside powers also play on the ethnic divides. Many Tajik politicians have strong relationships with India. Most Pushtun are pro-Pakistani. Pakistan is regularly accused of promoting the Taliban and Muslim fundamentalism as a way of asserting Pakistani influence and countering Indian inroads. Pakistani generals consider Afghanistan their “strategic depth” with regard to India. (I don’t think they understand the concept properly; you want your strategic depth between you and the enemy, not behind you.) Hazaras have not been as close to Iran as you might imagine, but some of their leaders do have links to Tehran.

The ordinary troops of the army are reluctant to risk their lives fighting for a corrupt government. There are high desertion rates and high rates of drug use in the army. While in some battles some units have fought bravely, despite its training, size and equipment it is regularly successfully challenged by smaller bands of Taliban.

If Trump had pulled the US out of Afghanistan, as he threatened to during the campaign, my guess is that Kabul would have fallen to the Taliban within a year. The US no longer does much active war-fighting in this country, but special forces and US fighter jets can intervene to stop a Taliban offensive.

Trump’s demand that India invest in Afghanistan was overly dramatic. India already invests in Afghanistan. But I don’t know what he expects. It is a desperately poor country with few natural resources. Although the Indian middle class has greatly expanded, much of India is still mired in rural poverty and those villagers are a much bigger constituency for the BJP government than are the villagers of Afghanistan.

Trump’s slam of Pakistan as giving safe haven to terrorists and extremists is the sort of thing it is better to say privately. You say it publicly, Pakistan’s urban elites are likely to tell Washington to jump in a lake. They consider Afghan fundamentalists as a vector of their soft power in a neighboring country. Already, Pakistan is being deeply embedded in China’s economic expansion westward, and Islamabad could easily turn to Beijing as its major foreign patron. And, by the way, the Pakistani military has fought some hard campaigns against extremists inside the country, and lost many troops to these battles.

In the end, Trump just kicked the can down the road. The fawning over him by some tele-journalists for doing so (and seeming decisive and “presidential”) was truly disgusting. If Afghanistan’s curses are corruption, fanatical identity politics and a hatred of globalization, its more problematic organizations resemble most of all . . . Trump’s base.