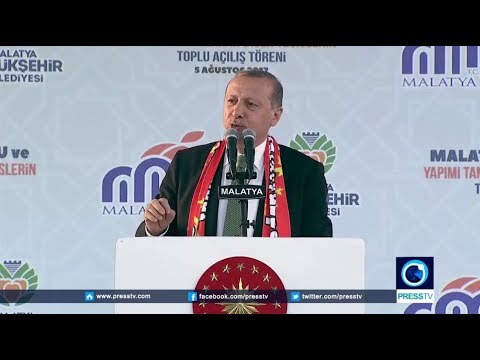 The Turkish Armed Forces are massing on the Syrian border days after a reshuffle of top brass in the country’s military in anticipation of a potential invasion that could dramatically complicate Syria’s ongoing civil war.

Kurdish militia backed by U.S. forces are currently taking part in an assault against the Islamic State group in their Syrian stronghold Raqqa. Turkey accuses the militia, known as the YPG, of being a “terrorist” group tied to the Turkey-based Kurdistan Workers Party, or PKK, against whom Turkey has waged a decades-long counterinsurgency campaign.

There have been regular exchanges of rocket and artillery fire in recent weeks between Turkish forces and YPG fighters who control part of Syria’s northwestern border. On Monday morning, the YPG official website released video of its fighters firing an anti-tank guided missile system, or ATGM, at a tank belonging to the “terrorist groups under the Turkish army’s command” — a reference to Turkish-backed Free Syria Army fighters — near the city of Azaz, Syria. Other footage showed YPG forces firing multiple rocket launcher systems at FSA targets.

Recent clashes have centered around the Arab towns of Tal Rifaat and Minnigh, near Afrin, which are held by the Kurdish YPG and allied fighters. However, the YPG’s release of a video showing the deployment of an ATGM system is controversial, especially because the White House approved the arming of the group in May despite protests from the Turkish government.

Turkey, which has the second largest army in NATO after the United States, reinforced the northwestern section of the border over the weekend with artillery and tanks, and Erdogan said Turkey was ready to take action.

“We are determined to extend the dagger we have put into the heart of the terror entity project … with new moves,” Erdogan said in a speech on Saturday in the eastern town of Malatya.

“We would rather pay the price for spoiling plans against our future and liberty in Syria and Iraq rather than on our own soil,” he added, referring to the YPG in Syria and PKK bases in Iraq. “Soon we will take new and important steps.”

Erdogan’s comments follow the appointment of three new leaders of Turkey’s army, air force and navy last week — moves which analysts and officials said were at least partly aimed at preparing for any campaign against the YPG militia.

“With this new structure, some steps will be taken to be more active in the struggle against terror,” an anonymous Turkish government source told Reuters. “A structure that acts according to the realities of the region will be formed”.

The battle for Raqqa has been underway since June, and a senior U.S. official said Friday that 2,000 Islamic State fighters are believed to be still defending positions and “fighting for every last block” in the city. Even after the recapture of Raqqa, U.S. Defense Secretary Jim Mattis has left open the possibility of longer-term American assistance to the YPG.

Turkey, however, has adopted an increasingly angry tone in public communications with its NATO partners, raising fears in Washington of a potential split in the organization.

Last month, Turkey’s official Anadolu Agency wire service published a detailed map revealing the locations of U.S. airports, military bases, and personnel in Syria in the Raqqa countryside. While the Pentagon complained that the release jeopardizes U.S.-led coalition efforts, Ankara was likely nonplussed by the complaint in light of their view that Washington is colluding with forces who pose a terrorist threat to Turkish national security.

In July, Erdogan noted that Turkey had reached the final stage of negotiations with Russia for the acquisition of Russia’s S-400 air defense system, which is inconsistent with NATO’s treaty-wide air defense network.