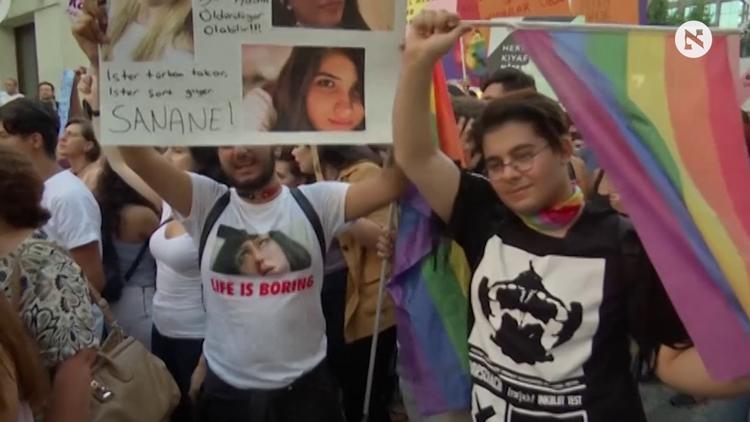 Istanbul has been widely viewed as a fairly liberal city for women and the LGBT community.

On the weekend, hundreds of Turkish women marched in Istanbul to protest against the abuse meted out from men who demand they dress more conservatively.

Women at the “Don’t Mess With My Outfit” March chanted while holding denim shorts on hangers, to depict the type of offending clothing.

“We will not obey, be silenced, be afraid. We will win through resistance,” the crowds chanted, some hoisting posters and rainbow flags. Some posters displayed the words “Don’t meddle with my headscarf, shorts, outfits.”

Istanbul has been widely viewed as a fairly liberal city for women and the LGBT community, several of whom attended the march to offer support for the women.

But, according to critics, Turkey President Tayyip Erdogan has shown little interest in expanding the rights of minorities, gays and women.

Protesters say that there has been an increase in the number of verbal and physical attacks against women because of their clothing choice.

In June, a young woman – Asena Melisa Saglam – was physically attacked by a man on a bus in Istanbul for wearing shorts during Ramadan. “Are you not ashamed of dressing like this during Ramadan?” a video footage showing the man said.

Canan Kaymakci, also, was harassed on the street in Istanbul when a man accused her of wearing provocative clothing, saying she should be careful because she was “turning people on.”

Another woman, Aysegul Terzi, was called a devil and kicked by a man for wearing shorts. Footage showed the man telling her that those who wear shorts “should die.”