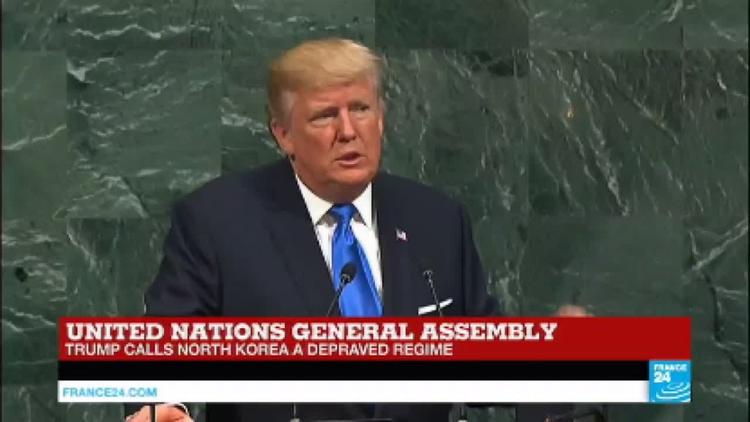 Trump more or less threatened to wipe out the 25 million people of North Korea in his speech at the UN.

Then he turned to the Middle East, where he again pledged to undermine the Iranian nuclear deal.

In other words, he put forward a plan to turn Iran into North Korea as a geopolitical problem.

The speech was a weird amalgam of white nationalism and Neoconservatism. It abandoned the isolationism of the former and eschewed the idealism of the latter.

“The Iranian government masks a corrupt dictatorship behind the false guise of a democracy. It has turned a wealthy country with a rich history and culture into an economically depleted rogue state whose chief exports are violence, bloodshed, and chaos. The longest-suffering victims of Iran’s leaders are, in fact, its own people.”

I swear, I thought Trump was talking about his own administration there for a second. He’s the one, not Iran, who called Nazis very fine people and blamed Heather Heyer for being run over by one of Trump’s supporters. I have been critical of the Iranian regime’s human rights record, as well, but Trump doesn’t have a leg to stand on here.

“Rather than use its resources to improve Iranian lives, its oil profits go to fund Hezbollah and other terrorists that kill innocent Muslims and attack their peaceful Arab and Israeli neighbors. This wealth, which rightly belongs to Iran’s people, also goes to shore up Bashar al-Assad’s dictatorship, fuel Yemen’s civil war, and undermine peace throughout the entire Middle East.”

Hizbullah was formed to get Israel back out of Lebanon. Israel committed a naked act of aggression against little Lebanon in 1982, invading and shelling Beirut indiscriminately. The Israeli army then occupied 10% of Lebanese territory, in the south of the country. The far right Likud party has sticky fingers, and it had no intention of ever leaving. Hizbullah fought a low intensity guerrilla war to get the Israelis to withdraw, which they finally did in 1999. Israel still occupies the Shebaa Farms area that belongs to Lebanon.

The Yemen civil war wasn’t fueled by Iran but by a Saudi air campaign against the government of the north of the country. The Houthis were unwise to make their coup in early 2015 against the interim government, but it was the Saudis who bombed targets from 30,000 feet and with little local knowledge. Iran may have facilitate some training for a handful of Zaydi fighters, but it doesn’t give them very much money. The conflict is indigenous and has its origin in Yemen resentment of Saudi attempts to spread money around and convert people out of Zaydism and into the ultra-rigid Wahhabi form of Islam.

As for Hizbullah backing Bashar al-Assad in Syria, so does Trump’s buddy Vladimir Putin, to whom Trump said Syria should be turned over. In other words, Hizbullah’s position on Syria isn’t much different from that of Trump.

It is very odd that you would blame the survival of the al-Assad regime on Iran alone and not bring up Russia. Russia has spent way more in Syria than Iran and has used its Aerospace Forces for intensive bombing over 2 years, a much bigger military impact than Iran’s. And Trump himself keeps saying Arabs need strongmen to rule them.

“We cannot let a murderous regime continue these destabilizing activities while building dangerous missiles, and we cannot abide by an agreement if it provides cover for the eventual construction of a nuclear program. (Applause.) The Iran Deal was one of the worst and most one-sided transactions the United States has ever entered into. Frankly, that deal is an embarrassment to the United States, and I don’t think you’ve heard the last of it — believe me.”

Let’s see. In the Joint Plan of Collective Action, Iran gave up:

1. –its planned heavy water reactor at Arak, concreting it in and abandoning it. Heavy water reactors can be used to gather enough fissile material over time so that you might be able to make a nuclear bomb. That pathway is gone.

2. –all but 6000 of its centrifuges, which aren’t enough to enrich enough uranium on a short timetable to make a bomb

3. –its stockpile of uranium enriched to 19.5%. It needs to be enriched to 95% for a proper bomb, but that is easier if you start part of the way there. That stockpile has been recast in a form such that it cannot be used to make a bomb.

4 — its objections to being intensively monitored by the International Atomic Energy Agency. It is now under the most stringent inspection regime in history. (Israel refused inspections and then made several hundred nuclear warheads and so did India and Pakistan and Russia and the US. Trump doesn’t condemn the actual proliferators, only Iran, which does not have a nuke).

Iran basically gave up the deterrent effect of being able to construct a nuclear weapon in time to stop an invasion. The United States has invaded 3 neighbors of Iran, so it isn’t an idle fear.

What did Iran get in return? The GOP Congress tightened sanctions, and has scared off a lot of European investors.

This deal is not between the US and Iran but between Iran and the UN Security Council plus Germany (representing the EU). The deal has deeply disadvantaged Iran and has not affected the US at all. In fact the US has already reneged on the spirit of it.

If what Trump is saying is that Iran was left with some elements of what is called ‘nuclear latency’– the knowledge of how to make a bomb, then that is correct. But the only way to wipe out Iranian nuclear latency would be to invade it and occupy it and put in a puppet government.

And that is what Israel’s Netanyahu and Saudi Arabia’s Muhammad Bin Salman want Trump to do. We have to see if he is so foolish.

Iran is 2.5 times as populous as Iraq and 3 times bigger geographically, and the Iraq War did not go well for the US.

“The Iranian regime’s support for terror is in stark contrast to the recent commitments of many of its neighbors to fight terrorism and halt its financing.

In Saudi Arabia early last year, I was greatly honored to address the leaders of more than 50 Arab and Muslim nations. We agreed that all responsible nations must work together to confront terrorists and the Islamist extremism that inspires them. ”

As or Saudi Arabia being the good guy, give me a break. They were backing anti-minority fanatics like Jaysh al-isalm who wanted to ethnically cleanse all Syrian non-Salafis (i.e. almost everyone). They had recognized the Taliban in the 1990s. They spread around an intolerant form of Islam that forbids Muslims to so much as have a friendly meal with Christians and Jews.

France 24: “Donald Trump at the UN: The Iran Deal is “an embarrassment to the United States”