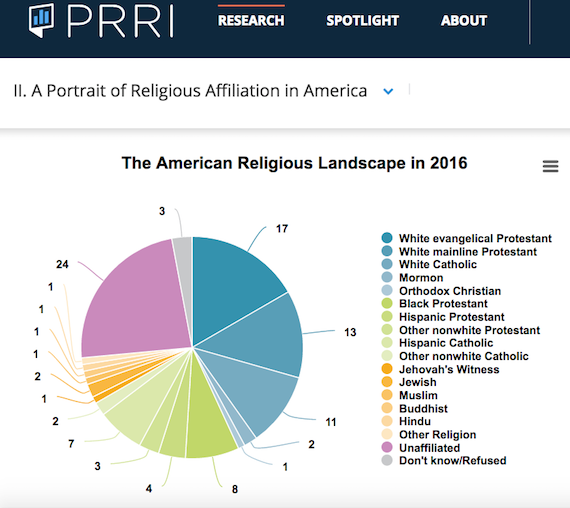 In 1976,when Jimmy Carter was elected, a big majority (81%) of Americans identified as both white and Christian, with 4 in 10 of those being white Catholics. The country even had a majority (55%) of white Protestants! Carter, an Southern evangelical, benefited from the Christian vote at a time when many church-going Americans had been disgusted by the vulgarity and criminality of the Nixon administration.

According to the Public Religion Research Institute, those days are over.

The Republican Party has thus become the primary political vehicle of white Christians, with nearly 3/4s of the party being white Christians. About a third are evangelicals.

It isn’t that Christianity is being displaced by other religions. People belonging to religions other than Christianity are only 6% of the population, maybe slightly more than in the past but still not that big a percentage.

One big change is that the advent of the Latinos in the number of tens of millions (almost all of them legal immigrants). Since Latinos typically do not consider themselves “white” (a historically constructed category that has had its ups and downs), only 55% of US Catholics now consider themselves “white.” In the early 20th century, whiteness was associated with being Protestant and middle class, and immigrant Poles, Irish and Italians were often viewed as a lesser sort of white, since they were Catholic and working class. It is possible that Latinos over time will claim whiteness, as Italians and Jews did. Or it is possible (I hope) that the category has outlived its usefulness.

Asians and Pacific Islanders, who are now 5% of the population, are one third Christian, one third another religion (Buddhism is big), and one third not interested in religion. They are the most diverse group in the country that way.

The Presbyterians, Congregationalists, and Baptists who formed the 13 colonies are no longer the bulk of the population. But let me just caution that we haven’t lost some great white American golden age.

If you had looked out in 1789 over the North American territory that became the United States by 1958, you would have found Quakers (dissenters) in Pennsylvania and Native American and Polynesian religions and many Catholics in French Louisiana and in the Spanish Empire of the southwest and west. Perhaps 20% of the African slaves were Muslim, and others adored African gods and goddesses. By the mid to late 19th century you had substantial numbers of Chinese Buddhists on the West Coast.

The East Coast WASPS never had the hegemony they thought they did.

Moreover, the white Protestant majority of 1976 had been connived at by the Nazi-style 1924 immigration act, which awarded countries quotas, essentially racial quotas, based on the composition of the US population in 1880 before the big wave of 20 million southern and eastern Europeans and Lebanese came in, 1880-1924. The 1924 act and other legislation excluded all Asians and tried as hard as possible to get blond-haired Germans and Norwegians to come, what with them being the superior race and all.

So the composition of the US public in 1976 was the result of what was more or less a eugenics program. It was not “natural” nor had it been typical of North America over its whole sweep.

The change the PRRI found is in part the result of the non-racist 1965 immigration act. But it is also the result of belated secularization, such that a larger proportion of self-identified whites than ever before report that they have no religion (it is about a third among Millennials).

So the Bannon branch of the Trump movement is a dinosaur, preaching imaginary grievances to a shrinking minority of Americans. It is not the future. It is highly unlikely that they can jigger the immigration system so as to recreate the white Christian majority. And the young are anyway voting with their feet.

It was a good run. It is over.