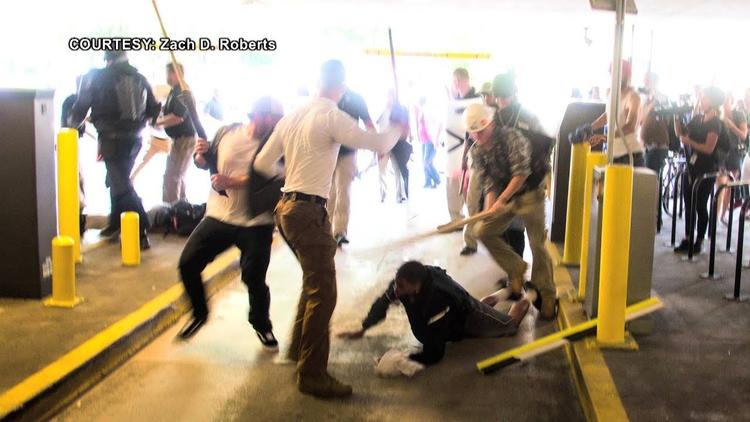 The importance of opposing the resurgence of emboldened KKK, Neo-Nazis and other hate-filled white supremacists that were on display in Charlottesville cannot be easily underestimated. Equally, if not more urgent, however, is the need to take advantage of the national disgust of hate groups by pivoting the public’s outrage toward our system of structural violence that harms many, many more people of color (and increasingly marginalized whites) than do the hate groups.

At the root of this structural violence is the massive use of state power to incarcerate hundreds of thousands of poor, black, male (and, increasingly, female) young people due to mandatory minimum sentences and the fake “War on Drugs.” To be honest, anyone on the political scene praising American “exceptionalism” has to include, in the list of what distinguishes the American experience today, the fact that our country locks up more people than any other nation. Although home to only 5 percent of the world’s population, the United States has 25 percent of the world’s prison population.

African Americans constitute nearly 1 million of the 2.3 million persons incarcerated and are incarcerated at nearly six times the rate of whites, according to the NAACP’s Criminal Justice Factsheet. One in three African American men will experience prison; white men’s risk is just 6 percent. Hispanic men are almost three times as likely to be imprisoned as non-Hispanic white men.

This massive incarceration amounts to extreme structural violence in the sense that it inflicts unspeakable forms of harm on people by preventing them from meeting their basic needs, contributing to community impoverishment, premature death and unnecessary disability. I can hardly even begin to imagine, for instance, the depth of the psychic wounds borne by the prisoners and their loved ones that result from the stigma and shame associated with unjust imprisonment.

Personalized accounts of the impact of mass incarceration are rare and shocking. In her 2004 book, author Jennifer Gonnerman provided us with a rare glimpse into the injustice of the “War on Drugs.” The book tells the story of African American woman, Elaine Bartlett, who spent 16 years behind bars as a first-time drug offender. Ms. Bartlett got involved in petty drug trade as a way to secure needed income. Bartlett was 26, with four small children, working off the books as a hairdresser in Harlem, when she agreed to take four ounces of cocaine by train from New York City to Albany, in exchange for $2,500. She wanted the money to buy furniture for her apartment and to put on Thanksgiving dinner for her large extended family.

Ms. Bartlett’s participation in the drug trade turned out to be a complete set up; she didn’t know that the person who asked her to transport the cocaine was a police informant in need of filling a quota for drug-related arrests. After her release, Bartlett was determined to stop her family’s downward cycle of imprisonment and impoverishment. The stark reality of her family’s dysfunction, poor health and insecurity that Bartlett had to face upon her release is, well, enough to make an empathetic person cry. Multiply her situation by hundreds of thousands of times, and it becomes much easier to understand the horrific impact of structural violence on the vulnerable, whatever their skin color or ethnic identity.

Much of this imprisonment associated with the “War on Drugs” punishes those engaging in self-medication with street drugs. A much more compassionate approach is to provide mental health services to drug users to help them achieve greater mental wellbeing and resilience. As a nation of compassionate people, we have to find a way to consistently treat drug-use as an illness, not a crime. One important way to do so is through integration of former addicts into society through increasing employment opportunities and ensuring they are away from poor negative environments which might lead to continued abuse.

The “War on Drugs” that accelerated in the 1980s focused overwhelmingly on punishing those using and trading in cocaine and crack cocaine, especially targeting African Americans. With the current widespread problem of opioid addiction especially by whites, there is a growing acknowledgment that drug addiction can stem from underlying mental health disorders. Let’s use this acknowledgement to define addiction, no matter the drug, as a health issue challenge and not as a crime. This will require substituting the phase “War on Drugs” with public health language such as “drug abuse epidemic.”

It is not enough for Americans to reject the white supremacist groups mentioned above; it is critical that we Americans, including those of European descent like me, embrace all our children regardless of the color of our skin or economic class. Social justice and human decency require that we put behind us the “we” and “they” identities that tolerate structural violence against the other.

Important reforms have been taken to repeal or reduce mandatory sentencing requirements because of the skyrocketing costs of imprisonment. A truly compassionate approach requires an accelerated effort to reduce the size of our prison population out of concern for the victims of structural violence. It also means that we need to implement a robust system of mental health support for its many, many victims and strong supportive programs to help those who have been victimized by structural violence to become more economically and socially resilient members of society.

Important moves in this direction were made during the past administration, but much more criminal justice reform is in order. The higher punishments for crack cocaine that disproportionately penalized African Americans were reduced. The administration urged people to think about drug addiction as a health issue instead of a criminal issue. In addition, the decriminalization and legalization of marijuana by state governments is contributing to smaller prison populations and saving the taxpayers money that would otherwise be spent on the criminal-justice system.

It’s possible to work across party lines to achieve further reform. The first step is not to engage in blaming for past misdeeds, but rather to recruit support for present-day rectifications. Republican Senator Rand Paul and Democratic Senator Kamala Harris are showing us the possibility of a bipartisan way forward. Paul and Harris argue that the requirement that defendants provide some cash to get bail and earn their release keeps hundreds of thousands of defendants behind bars awaiting trial on minor charges because they cannot afford to get out. They call it one of the most inequitable aspects of the criminal-justice system. Power to their efforts that serve as example of how we can overcome structural violence working together for the common good.

Gregory Alonso Pirio earned an M.A. in African Studies and a Ph.D. in African History from UCLA. His dissertation was entitled, “Commerce, Industry and Empire: The Making of Modern Portuguese Colonialism in Angola and Mozambique, 1890-1914.” He is also author of The African Jihad: Bin Laden’s Quest for the Horn of Africa (Trenton: Red Sea Press, 2008). Dr. Pirio was editor of Rebuilding Shattered Nations and Lives: Post-Conflict Reconstruction and Development in Africa (UNHCR, 2009), for which he wrote the introduction, “African Conflicts in Historical Perspective.” He has published and produced studies on numerous topics, including on media issues, Pan-Africanism, global health, African conflicts and terrorism.

Democracy Now! “Deandre Harris Was Savagely Beaten by White Supremacists in Virginia. Why Only Two Arrests So Far?”