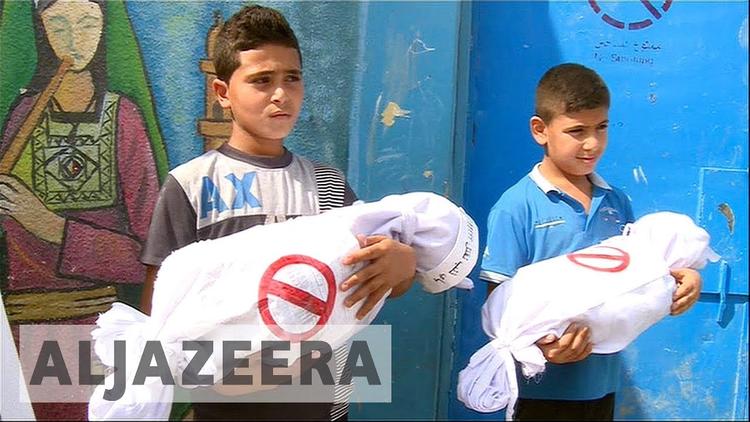 Over a million children in Gaza are living in impoverished circumstances due to electricity shortages, causing problems for public health and education, warned Save the Children on Tuesday.

The international NGO says Israel’s ongoing land, air and sea blockade of Gaza, which has been in place since 2007, is the primary cause of the electricity shortages.

Save the Children also highlights that Gaza’s sole power plant had stopped functioning in April 2017 after exhausting its fuel reserves, since operators could not replenish them due to insufficient funds. The plant, already damaged from Israel’s war on Gaza in 2009, had provided a third of Gaza’s electricity.

“The Palestinian Authority stopped funding electricity to Gaza in April 2017. Egypt as a supplier had dropped out too, despite reportedly offering Gaza’s power plant a recent emergency boost, which leaves Gaza dependent on Israel.”

Most homes in Gaza now have just two to four hours of electricity per day, while some have no one at all. Many children spent the recent Islamic festival of Eid al-Adha in the dark.

“While politicians celebrate Eid and sleep in their air-conditioned homes, Gaza’s children are sweating in the stifling summer heat, unable to sleep, play or study”, said Jennifer Moorehead, Save the Children’s Country Director in the Occupied Territories. “We shouldn’t have to be demanding such a basic service as electricity for the children of Gaza. A couple of hours of power a day is just not acceptable in 2017.”

Gaza’s schools barely operate at functional levels, with 741 of schools having no electricity, reports Save the Children. Children struggle to sleep, making it harder for them to concentrate in school. Darkness at home often prevents children from completing their homework.

“We are different from other countries that have 24 hours of electricity, and their life is not like ours. I have so many dreams. But my main dream is that I could be like other children and live in peace, security, and have electricity,” says Rania, a 13-year-old living in Gaza.

Many children’s lives are at risk, with a breakdown of health and emergency services. This prevents treatment of water-borne diseases, which are increasing due to pollution of groundwater sources and the nearby Mediterranean Sea.

Due to suspension of sewage treatment cycles, over 108 million litres of untreated sewage fall into the water each day, leaving over 60% of the sea surrounding Gaza polluted with untreated sewage.

90% of water sources are too contaminated for human consumption, leaving children with little or no access to clean drinking water. Many cannot take regular baths or showers too, due to non-functioning water pumps.

The situation is particularly dire for 15-year-old Ali, who suffers from a form of cerebral palsy, relying on an electric wheelchair.

Ali’s mother Yara said: “My son is dying in front of my eyes. He can’t sleep most nights, and suffers from continuous pain. We don’t have enough power to get his electric wheelchair and mattress fully charged. If his wheelchair doesn’t get charged, he suffers psychologically, as he sees people around him move and walk but he can’t. He feels depressed and often fights with other children. When the wheelchair runs out of battery, Ali becomes totally paralysed.”

“He also needs constant showers as he is wearing diapers, but there is no water. We don’t get water unless there is electricity. If I don’t change his diapers and wash him regularly he will suffer from skin rashes and other problems. We have not had any tap water for two days. I feel suffocated,” she added.

Ali himself said: “I used to enjoy going to the beach to see the sand and the sea, but unfortunately I can’t go there anymore now.”

The United Nations warned in 2012 that Gaza could become uninhabitable by 2020, yet the NGO says the Strip is already “unliveable”.
“Sadly, the children of Gaza are caught in one of the most politicised conflicts in the world,” continued Jennifer Morehead. “The continued Israeli occupation and splits within the Palestinian leadership are making life unbearable. If you’re ten years old in Gaza you’ve already witnessed three massive and violent escalations of conflict.”

“Gaza’s children are already suffering through a ten-year blockade and the constant threat of conflict. Living without access to basic services like electricity is affecting their family life and mental well-being. We’re seeing increased levels of anxiety, aggression and mood swings.”

Save the Children has called for Israel to lift the blockade on Gaza, for the Israeli government and the Palestinian Authority to provide basic services to the children of Gaza, and for the international community to react to the suffering caused by the blockade.

The UN reported in July 2017 that 47- unemployment rate, and around 80% of the population depends on humanitarian assistance.

In one incident in August, neonatal nurses at Al Shifa Hospital in Gaza City were forced to provide care to 71 babies in a care unit designed for 43 babies. In this incident, the ratio of staff-to-babies was 1:7, much lower than the UK level of 1:1 or 1:2 during critical care. Faulty electricity backup generators mean nurses must often hand-ventilate babies for up to 50 minutes at a time until power is restored.

Please click here to donate to Save the Children’s emergency fund.

Jonathan Fenton-Harvey is a UK-based freelance journalist, with a special focus on the Middle East and North Africa, where he has traveled extensively. His work has been featured in the New Arab (Al Araby Al Jadeed English), Middle East Eye, Counterpunch and Tribune magazine (UK). He also studies history and politics at the University of Exeter.