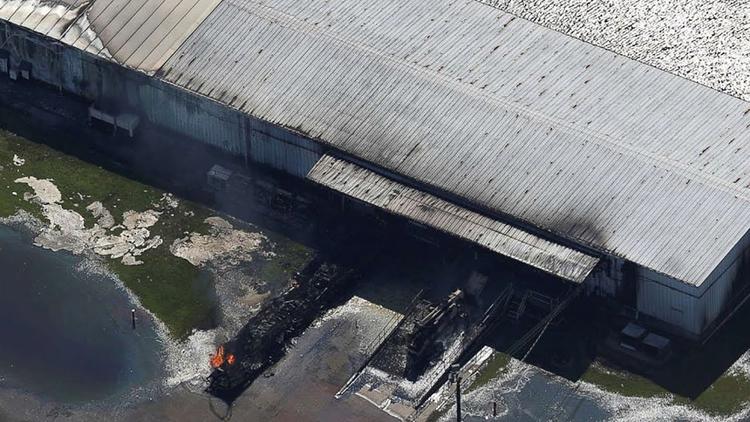 “People don’t know what’s seeping into their air and their homes.”

“Now the thing’s exploded, and people don’t know what’s seeping into their air and their homes.”
—Lydia DePillis‏, Houston Chronicle

In a statement on Thursday, Arkema urged residents to stay clear of the site and cautioned that the “threat of additional explosion remains.”

As we communicated in recent days, our site followed its hurricane preparation plan in advance of the recent hurricane and we had redundant contingency plans in place. However, unprecedented flooding overwhelmed our primary power and two sources of emergency backup power. As a result, we lost critical refrigeration of the products on site. Some of our organic peroxides products burn if not stored at low temperature.

CBS19, the Houston affiliate, first reported the explosions early Thursday and noted that black smoke was emerging from the area.

“The fire will be explosive and intense,” he concluded.

As CNN noted, “one deputy was hospitalized after he inhaled fumes” from the plant. “Nine others drove themselves to the hospital as a precaution.”

Green groups have in recent days warned that explosions of this kind were likely to result from a massive rain event like Hurricane Harvey striking the heart of the petrochemical industry. As the Huffington Post noted, “Arkema is among dozens of chemical plants and refineries in the Houston area, many of which have sustained damage in this week’s flooding, causing harm to residents’ health and the environment.”

“Living just two miles from one of the largest collections of chemical plants and refineries, I’ve seen the black smoke burning off from these deadly and dangerous plants, I’ve smelled the oil and chemicals, and I know the fear that strikes so many of our communities on a daily basis, which has been magnified by Harvey,” said Sierra Club organizer Bryan Parras. “Perhaps the most terrifying thing at the moment is that we simply don’t know what’s happening at these facilities.”

Refineries have already begun to emit dangerous pollution as a result of Hurricane Harvey, Common Dreams reported on Tuesday, and local reporters are warning that it is unclear what impact the fumes from Thursday’s explosion and its aftermath will have on the population.