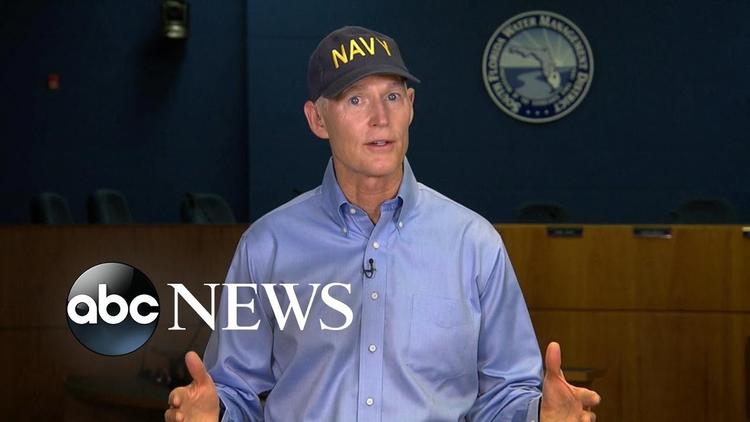 Florida Gov. Rick Scott did not cause Irma, but he enabled the Frankenstorm. Before becoming governor in 2011, Scott had been an entrepreneur who “ specialized in privatizing healthcare and ran a hospital chain convicted of a massive healthcare fraud.”

Scott met with Carbonmongers Charles and David Koch soon after being elected, and all of a sudden Florida’s environmental laws began being gutted.

Now he will want you to give him $150 billion to rebuild his state, from your tax dollars. He and his ilk argue that it is less expensive to deal with a changing climate than to reduce carbon dioxide emissions.

Scott enabled Irma’s unusual severity by opposing measures to reduce carbon emissions. He even started replying to climate change questions by saying “I’m not a scientist.” I’m not a scientist either but I took eighth grade chemistry and know what a greenhouse gas is.

Scott opposed a high speed train in central Florida, which would have cut down on automobile use and forestalled thousands of tons of CO2 emissions.

Scott told Florida state employees not to use the term climate change. That included scientists working for the state. Our current head of the anti-EPA, Scott Pruitt, has taken over that Scott policy and applied it to the entire Federal government. Pruitt thinks it is disrespectful to the victims of Harvey and Irma to talk about climate change. Actually it is disrespectful to the victims to victimize them with carbon dioxide and methane emissions.

Scott backed measures that punished Floridians of all people for having solar panels on their roofs. Florida is like Disneyworld for solar power. Scott’s Neanderthal policy was overturned by a popular referendum only last year.

Instead, In 2015, Florida sued the Federal government along with 23 other states “over a plan to reduce carbon emissions nationally, claiming the law will increase electric rates.” Yeah, right, because free sunshine and wind are more expensive than pricey coal and natural gas.

Scott has been a creature of Big Oil, covered in liquid tar, like a monster hiding out in a swamp, and the fumes he has put off have summoned Irma.

Florida emits 227,000,000 metric tons of carbon dioxide every year, over 4% of the US national output. It therefore played a role in making Irma into an incredible Hulk. And Scott has prevented emissions reductions for 6 years straight. And remember that he has had a national impact through influence on other governors and his suit against President Obama. Scott’s contribution to the destructiveness of this storm is relatively small, but it actually is large enough to be quantified, and since he is helping wreck a whole planet, that simple fact is terrifying.

Manmade climate change does not cause hurricanes. Hurricanes form naturally over warm water. The warmer the water, the stronger the hurricane. There were hurricanes before 1750, when human beings decided to burn so much wood and coal (and later, oil and natural gas) that they would turn the whole world tropical.

What human beings have done is to magnify hurricanes. By driving our cars, cooling and heating our homes, making cement, and industrializing our agriculture, we have put billions and billions of metric tons of carbon dioxide into our atmosphere. We have sort of acted on the climate the way radioactivity works on Dr. Bruce Banner (nowadays played by Mark Ruffalo), turning him into a large, green, angry incredible Hulk.

Putting greenhouse gases into the atmosphere prevents the sun’s heat from radiating away back into space once it strikes the earth. Keeping the heat in causes the average surface temperature to rise over time. The oceans are a degree F warmer than the 20th century average.

Hotter water has some basic properties. It expands, so the sea level rises for that reason. But surface ice over land also melts and runs into the sea, which also raises the sea level. The Caribbean is a good half foot higher now than a century ago.

Higher seas lead to higher storm surges. Irma’s storm surges may be as high as 12 feet, or even 20.

How fast and destructive the winds of a hurricane are depends on how hot the water is, over which it travels. Hotter water produces more severe winds. The Caribbean waters are unusually hot, hence Irma’s sustained 185 mile an hour winds, which are unprecedented in the historical record at that speed for their longevity.

Rick Scott should resign. He helped empty out his state. You wouldn’t call that being a good governor.

ABC News: “Florida governor to residents ahead of Irma: ‘You’ve got to get out'”