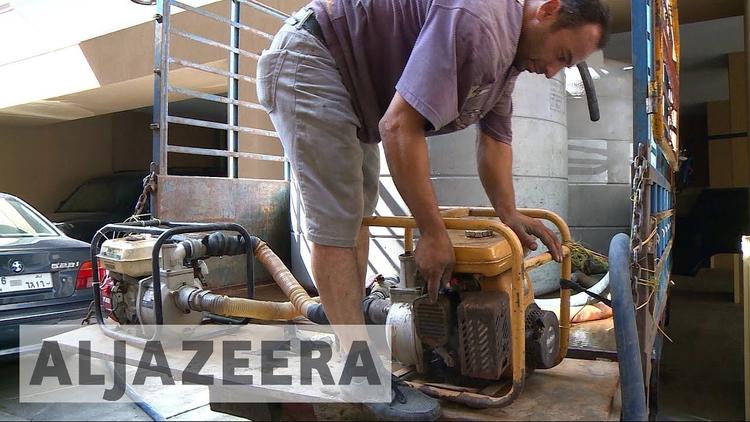 The Middle East and North Africa (MENA) already the most water stressed region in the world, faces a worsening crisis in terms of its access to water in the decades to come.

A country is water stressed when it cannot provide the minimum water supply to satisfy the essential needs of its population. This is set by the World Bank at 1,700 cubic metres of water per capita per year. The region – made up of the 22 countries in the Arab League, together with Turkey and Iran – also has very low levels of rainfall. Most of it has 600 millimetres per year and is thus classed as part of the arid zone.

There are several reasons why the water crisis is set to get worse – key ones include;
the region’s burgeoning population, irrigation and the consequences of climate change. Regional populations of around 300 million today will more than double to over 600 million by 2050 and be confronted with the threat of climate change.

And the MENA region is going to be one of the most adversely affected regions worldwide, as current summer temperatures attest. Average temperatures are expected to rise by between 3-5°C by the end of this century and rainfall will decrease by 20% over the same period.

The result will be vastly increased water stress, accelerated desertification – as the Sahara extends northwards, eating into the arable coastal plains on which most of the population lives – and a rise in sea levels. The World Bank estimates that this sea rise could threaten 6 to 26 million MENA residents over the next century, depending on whether sea levels rise by 0.1 or 0.9 metres, particularly in Egypt’s Delta and along the coasts of Libya and Tunisia.

At present, the MENA region contains 6% of the world’s population but only has access to 1.5% of its renewable freshwater supply through rainfall. This means that, on average, every person in the region has access to 1,274 cubic metres of water a year yet the World Bank estimates that individuals need a much higher minimum.

These basic figures, however, mask even more unpalatable realities. Up to 87% of the available water in MENA is used for irrigation -– usually the most wasteful flood water system. This means that the water actually available to individuals or industry is far less than the average suggests.

Water access is not uniform throughout the area. Turkey, for instance, is the only country in the region that is in water surplus, in terms of its renewable supply. All the other countries in the region are in water deficit. They have to compensate, either with purified waste water, through expensive desalination or by depending on their underground water reserves which are only very slowly replenished.

Egypt, for example, has 794 cubic metres of renewable fresh water per person per year and must make up the balance through fossil underground water, water that is held in porous strata below the surface.

Two of the most extreme cases, though, are Libya and Yemen. In Libya the dependence of the coastal populations –- 70% of Libyans live in or around the coastal cities of Tripoli and Benghazi –- on underground water has meant an overuse of fossil water . This is because of the lack of rainfall and has resulted in seawater seeping into the water aquifers – a porous layer that holds water underground. This has rendered the water itself unfit for human consumption.

Libya, however, years ago, tapped into the vast aquifers under the Sahara Desert which collect water from Ethiopia’s Nubian Hills and convey it towards Africa’s Mediterranean coast. Its Great Manmade River project now supplies plentiful water to the coastal cities; but at a cost. The aquifers take 30,000 years to recharge and their overuse means that the water table continually declines. This creates the phenomenon of “aquifer-chasing” where the collection system has to bore ever deeper just to maintain water supply.

Yemen, too, has a similar problem which is now acute largely because of the national addiction to qat –- up to 40% of its irrigation water goes into the drug’s production. In Sana’a, the Yemeni capital, wells that were only 30 metres deep in the 1970s now reach 1,200 metres below ground and the city is expected to run out of water entirely in a few years time.

Sometimes, the problem is man made. Europe’s thirst for flowers and out-of-season fruit and vegetables has encouraged the spectacular growth of “non-traditional exports”, often pushed by the World Bank. But such produce requires vast amounts of irrigation water and thus exploits underground water supplies. In parts of Morocco’s Souss Valley, for example, the water table declines by 11 metres each year, simply because of the water demand of the flower and fruit growers.

In effect, therefore, such exports actually export precious water, thereby further depleting regional resources. Such “virtual water” loss in the form of agricultural exports has to be made up for through imports. To provide an individual with an adequate diet of 2,800 kilocalories a day, a water input of between 2,000 and 5,000 litres a day is required. This has to be provided through food imports where domestic production is insufficient because water lacks.

Surface water cannot make up for the deficit in rainfall as the region only has three major river systems –- the Tigris-Euphrates system, the Jordan River and the Nile. The Tigris and the Euphrates originate in Turkey and have been monopolised by Turkey’s Grand Anatolia Project, a web of dams to provide irrigation and hydroelectricity. Water flows to downstream states (Iraq and Syria) have been restricted as a result. The consequence is that, in Iraq, salt water has infiltrated 150 kilometres inland and, in 1975, the Iraq rice crop failed because of the decline in water levels in both rivers.

In Egypt, the Nile, which has been the lifeline for national survival for the past five millennia, is now threatened by Ethiopia’s Renaissance Dam. Yet there is no effective instrument for guaranteeing water flows to downstream states in international law, so Egypt fears that its vital water flows will be reduced. The problem is not new but it has never caused war between states competing for water, perhaps because both upstream and downstream states know that they both need access to the same resource!

The real solutions therefore are to find ways of using water more efficiently and rationally, rather than fighting to retain control. Waste needs to be eliminated – up to 50% of all piped water is lost through leaks – and cost-effective methods of desalination through solar power will ultimately be the key to survival.