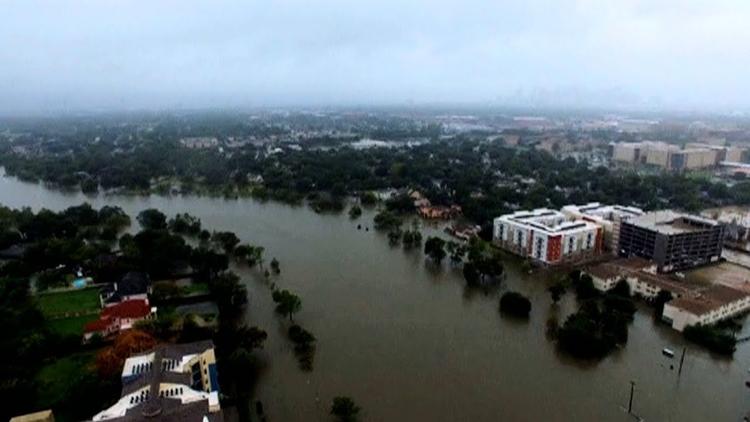 “Hurricanes don’t care if you’re rich, poor, white, or black—but that doesn’t mean that every person is equally vulnerable to a storm.”

People wait to be rescued from their flooded homes after the area was inundated with flooding from Hurricane Harvey on August 28, 2017 in Houston, Texas. (Photo by Joe Raedle/Getty Images)

People wait to be rescued from their flooded homes after the area was inundated with flooding from Hurricane Harvey on August 28, 2017 in Houston, Texas. (Photo by Joe Raedle/Getty Images)

Texas’s minority and low-income communities have been disproportionately harmed by Hurricane Harvey, but you wouldn’t know it from following the coverage of America’s mainstream media outlets.

As Neil deMause notes in an analysis for Fairness & Accuracy in Reporting (FAIR), “nearly 600,000 Harris County residents live below the poverty line,” yet “one had to read carefully between the lines” to find their stories told in any detail.

“Coverage of the poor during Harvey [has been] a bit better than in Katrina, but that’s not saying much,” deMause wrote on Twitter.

From the Associated Press to the New York Times, the national media has consistently shown its “blindspot for low-income victims,” deMause concludes.

But, as many have pointed out, it is low-income and minority communities that always bear the brunt of natural disasters like Hurricane Harvey.

“Hurricanes don’t care if you’re rich, poor, white, or black—but that doesn’t mean that every person is equally vulnerable to a storm,” observes Jeremy Deaton of ThinkProgress. “Low-income families are more likely to live in flood-prone areas with deficient infrastructure.”

Robert Bullard, professor of urban planning and environmental policy at Texas Southern University in Houston and “the father of environmental justice,” told Deaton that “low-income communities and communities of color don’t get the necessary protection when it comes to flood control. Generally, the way that the city has grown and the way that the housing and residential patterns have emerged have often been along race and class lines.”

Often these housing “patterns” didn’t merely emerge, but were the result of policies designed to “perpetuate segregation.”

Bullard goes on to note that Houston—which was hit particularly hard by Hurricane Harvey—”spends more on infrastructure in wealthier neighborhoods. That means bicycle lanes and jogging trails but also embankments that keep floodwaters at bay. Low-income communities tend to lack these features.”

“Rebuilding will be a long and painful process for people with so few resources.”
—Neena Satija and Kiah Collier, The Texas Tribune

Not only do these communities lack the some of the protective components of their rich counterparts. As Neena Satija and Kiah Collier of The Texas Tribune have noted, they also lack a social safety net to help them cope with the aftermath of the storm.

“Hundreds of families have been displaced from city-owned public housing complexes that flooded in the wake of Harvey,” Satija and Collier write, citing an adviser for the Houston Housing Authority. “Rebuilding will be a long and painful process for people with so few resources.”

Adding to these concerns is the fact that low-income communities in Houston are often also the site of major oil refineries and chemical facilities.

“For decades, Houston has been home to an immense concentration of chemical and plastics plants, oil and gas refineries, Superfund sites, fossil fuel plants, and wastewater discharge treatment plants,” Sierra Club has observed. “The overwhelming majority of these facilities were constructed in communities of color, only adding to the burden felt from this disaster. Now, in the wake of Hurricane Harvey, the threat posed by these facilities has been magnified.”

In an interview on Democracy Now! earlier this week, Dr. Bullard concluded that “when we talk about the impact of sea level rise and we talk about the impacts of climate change, you’re talking about a disproportionate impact on communities of color, on poor people, on people who don’t have health insurance, communities that don’t have access to food and grocery stores.”