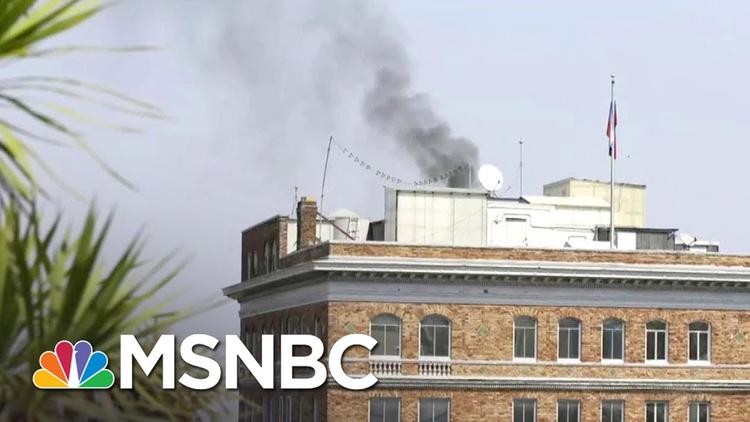 WASHINGTON — Russia’s Foreign Ministry said that U.S. law enforcement officials intend to search its San Francisco consulate and some diplomatic residences, and it complained the U.S. demands were posing a “direct threat” to its citizens.

Foreign Ministry spokeswoman Maria Zakharova said in a statement posted September 1 that unnamed U.S. agencies plan to conduct the search on September 2, following the State Department’s announcement this week ordering the consulate and two other trade annexes in New York and Washington closed.

Why Was The Russian Consulate In San Francisco Burning? | All In | MSNBC

A State Department official would not immediately comment on whether any searches were planned or had been requested by U.S. law enforcement.

But in an e-mail to RFE/RL, the official said the U.S. order to close the facility as of September 2 meant Russia could no longer use it “for diplomatic, consular, or residential purposes.”

A senior U.S. administration official made similar comments to reporters on August 31, suggesting that U.S. law enforcement would potentially have access to the building as needed.

“At this — any facility, that is — that they continue to own that is not recognized as a diplomatic annex, there — the only authorized activities would be the protection and maintenance of the property,” said the official, who also spoke on condition that he or she would not be named.

Calls and e-mails to the Justice Department were not immediately returned.

A man who answered a Russian Embassy emergency telephone line responded when asked by RFE/RL what was happening: “No, no. There’s nothing going there. Don’t be afraid.”

Not long after the Foreign Ministry statement was issued, black smoke was seen billowing from a chimney at the consulate, prompting a response from San Francisco firefighters. A department spokeswoman later told the Associated Press that the consulate had a fire going in the fireplace and that unidentified items were being burned.

Late on September 1, AP reported that workers at the San Francisco consulate started hauling boxes out of the building to meet the September 2 deadline for evacuating the consulate.

The statement from Zakharova complained that the move amounted to a violation of diplomatic protocol and immunity and echoed comments earlier on September 1 from Kremlin foreign policy aide Yuri Ushakov, who said the U.S. order amounted to a hostile takeover.

“The demands of the U.S. authorities create a direct threat to the safety of Russian citizens,” she said.

In announcing the closure order, the State Department said it was made in “the spirit of parity invoked by the Russians” — a reference to the order by Moscow last month that the number of U.S. diplomatic personnel in Russia should be drastically cut.

Russia on July 28 said the number of U.S. personnel in Russia must be cut to 455 people by September 1, which President Vladimir Putin said meant cutting 755 people. Officials said that demand was Moscow’s response to a U.S. law strengthening sanctions over issues including Moscow’s alleged interference in last year’s presidential election.

“President Trump continues to say the same, and President Putin has expressed his interest many times, but this should be a two-way street based on mutual respect,” Lavrov said.

The shuttering of the San Francisco facility will leave Russia with its embassy in Washington and three consulates — in Seattle, Houston, and New York City.

The United States has its embassy in Moscow and consulates in St. Petersburg, the Ural Mountains city of Yekaterinburg, and the Pacific port of Vladivostok.

While Moscow forced a large cut in U.S. diplomatic staff, Russia will not be required to reduce its embassy staff in the United States despite the consulate and annex closures, and the United States does not intend to expel any of the staff who are displaced by those closures, the senior U.S. administration official said.

In December, then-President Barack Obama announced the expulsion of 35 Russian diplomats and the seizure of two diplomatic compounds in the United States in response to what U.S. intelligence officials said was a campaign of cyberattacks and propaganda to undermine the U.S. electoral system and weaken Trump’s Democratic rival, Hillary Clinton.