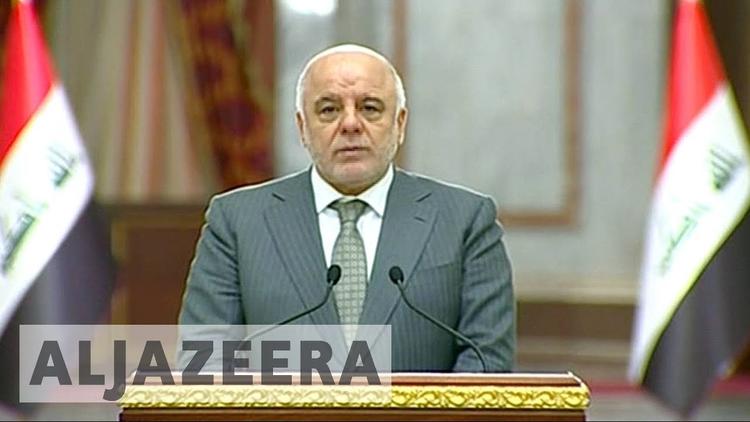 The Iraqi parliament on Wednesday passed a resolution demanding that the Iraqi army take control of the province of Kirkuk and reclaim the Kirkuk oil fields as a national patrimony. The parliament also demanded that the government arrest and try Kurdistan president Massoud Barzani for treason. Oil-rich Kirkuk, a multi-ethnic province with Arabs, Turkmen and Kurds, was seized in 2014 by the Kurdistan paramilitary in hopes of adding it to Dohuk, Erbil and Sulaymaniya, the three Iraqi provinces melded into the Kurdistan Regional Government super-province. Baghdad claims Kirkuk province for itself and wants to reestablish a military presence there now that ISIL is largely defeated.

Meanwhile, the Baghdad government is using its international recognition to impose an air flight ban on Iraqi Kurdistan in the wake of this week’s referendum, in which 92% of the 8 million Iraqi Kurds are said to have voted for independence.

Iraqi prime minister Haydar al-Abadi has given the KRG authorities an ultimatum that they must withdraw their Peshmerga paramilitary from all international airports (i.e. those in Erbil and Sulaymaniya) and must turn over all border checkpoints to the Iraqi army rather than manning them themselves.

Even before the Iraqi army collapsed in June of 2014, when its troops fled advancing ISIL fighters, the Peshmerga in Kurdistan had taken up substantial security duties, including inside Arab Iraq far from the formal border of the KRG with other Iraqi provinces. The Obama administration attempted to rebuild the Iraqi army, but only three counter-terrorism brigades are thought capable of fighting effectively and without US command.

In the meantime, Iraq is contacting international air carriers and instructing them not to fly to Erbil or Sulaymaniya in the KRG. Since by international law Iraq is recognized as sovereign over all its territory, airlines have been complying with al-Abadi’s request already. Egypt, Jordan, Lebanon, Iran and Turkey have all ceased flying to Iraqi Kurdistan.

As isolating as the Iraqi moves are, Turkey can hurt the KRG even more badly. President Tayyip Erdogan is threatening to cut off oil exports from Iraqi Kurdistan through the Cayhan pipeline. Turkey is also ceasing food exports to Iraqi Kurdistan.

Iraqi Kurdistan is landlocked and surrounded by hostile governments who do not want it to secede from Iraq. In going ahead with the referendum, Barzani put his country on a collision course with the whole world.