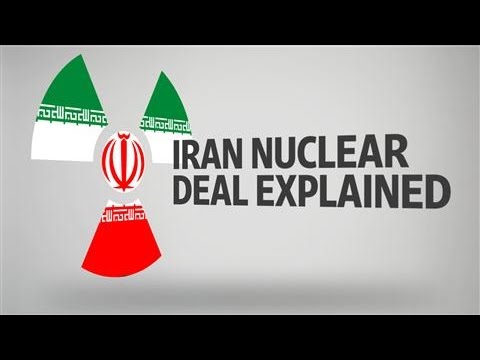 By Mohammed Nuruzzaman | (The Conversation) | – –

Iran and the US are once again on a dangerous collision course. President Trump’s search for excuses to decertify the July 2015 nuclear deal, negotiated by the Obama administration, is exacerbating new tensions in their frayed relations.

The US, in a bid to keep the Iranians in check and maintain its interests in the Middle East, has threatened or used a host of options, including possible military attacks, diplomatic isolation and economic sanctions.

The latest of these has seen a ban of Apple mobile applications across the country, as reported by the New York Times on August 24.

Despite all this, Iran seems to have emerged more powerful in recent years and has now expanded its sphere of influence in the Gulf region and in the Levant.
One of Iran’s assets has been its military development over the past decade.

President Hassan Rouhani has, according to a 2015 British report, given the Islamic Revolutionary Guard Corps (IRGC) an annual cybersecurity budget of around US$19.8 million. Iranian military equipment is now a growing factor on the regional arms markets in Iraq, Syria and Lebanon, as Iran trades with governments and militia groups.

The IRGC forces are also now capable of projecting power across the Middle East, sending military advisers, volunteers and training professionals to Iraqi and Syrian governments and different militia groups.

In June this year, Tehran for the first time fired medium-range missiles on Islamic State targets in Syria. It has also successfully produced and tested long-range ballistic missiles, main battle tanks and unmanned aerial vehicles, in addition to domestically built submarines and attack boats. According to the Israeli prime minister, Iran is also building missile factories and sites in Syria and Lebanon.

The US involuntary hand

How has Iran managed to extend its influence in this way?

The 2003 US invasion of Iraq was a turning point for Iran. Indeed, President George W Bush’s “war on terror” was unintentionally of great benefit to Iran.

Shia-majority Iran’s two bitter enemies – the fiercely pro-Saudi Sunni Taliban government in Afghanistan and the Saddam Hussein regime in Iraq were under fire from the US. The risks of attacks on Iran from the eastern and western borders were lessened – this despite the Bush administration’s relentless threats of regime change. The occupation of Iraq also encouraged the Iranian government’s nuclear program.

Iran’s strategy of increasing its power has centred on the promotion of cross-border Shia solidarity, and the development of what the Supreme Leader Ali Khamenei has called “resistance economy”.

During the Iran-Iraq war (1980–1988) the Sunni-dominated Saddam regime in Iraq, then aided by the US and the Gulf Arab states, seriously damaged Iran.

Since then, Iranians have cultivated strong political, economic and sectarian ties with Iraqi Shias hoping to eliminate future Iraqi threats to Iranian security. This strategy has paid off. In 2010 elections, Iran-supported Shia political parties and groups emerged victorious in Iraq, and they are now controlling political power in Baghdad. It has been a significant objective of Tehran to check the rise of Sunni extremist groups and thus stave off future Sunni dominance in Iraqi politics.

The following year, the Arab spring and Syrian war brought an unexpected opportunity. Tehran sided with its only Arab strategic partner – the secular government of President Bashar Al-Assad, an Alawite Shia, and backed the growth of its traditional Lebanese ally Hezbollah, a Shia organisation which was also fighting in Syria.

At the same time, the rise of various Sunni extremist groups, including Islamic State, shaped Iran’s role in the Middle East more broadly as the defender of Shia Muslims. What is more, Russia’s direct military intervention in Syria in 2015 put Iran and Russia on the same strategic page, as a powerful counter force to the US-Saudi bloc.

Iran has also cut a political and economic niche in the ongoing Saudi – Qatari diplomatic rift by siding with Qatar and providing the tiny Gulf state with food supplies and other imports.

Resistance economy is Iran’s deft strategy to survive in a hostile global economic environment. Designed to counter the corrosive effects of US and EU sanctions, it seeks to reduce Iran’s vulnerabilities to global and regional economic shocks through domestic capacity building, develop a knowledge-based economy and improve industrial production and technological competitiveness. Another big objective is to decrease dependence on oil and gas – Iran’s principal source of revenues until now.

Iran wants the US to at least curtail its presence in the Middle East, if not to totally pack up and leave the region. It sees US military and naval presence in the Persian Gulf as completely unacceptable. This is a major cause of concern for America’s Gulf allies who heavily depend on US military supplies and cooperation for their security.

Indeed, Iran’s growing influence is making Israel and Saudi Arabia very nervous. The Hezbollah connection has already prompted Israel and the US to support anti-Assad rebels.

Saudi Arabia views Iran’s role as a power broker in Iraq and Syria as a big loss to its regional power and influence. Riyadh also decries Iran’s involvements in Arab affairs, which, it deems, aims at seeking regional hegemony.

Iran, in a sign of defiance of US sanctions, could today be more determined to complete its ballistic missile program. As tensions ratchet up between Washington and Tehran, worst-case scenarios such as armed confrontations are growing.

Whatever follows, it is clear the events of recent years have resulted in Iran becoming a pivotal player in the Middle East region.