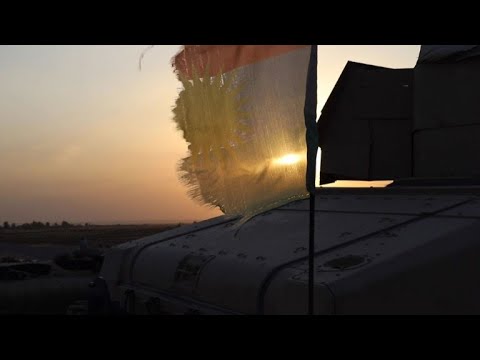 According to Kurdish TV station, Rudaw, an additional 6,000 Peshmerga forces have been mobilized in Kirkuk to defend from a possible Iraqi threat.

Kurdish TV channel Rudaw has reported that tens of thousands of Kurdish fighters have been deployed in the Kurdistan region of Iraq’s capital of Kirkuk to defend the region from possible “threats” from Iraqi forces.

“Tens of thousands of Kurdish Peshmerga and security forces are already stationed in and around Kirkuk,” said Kurdish Vice President Kosral Rasul. “At least 6,000 additional Peshmerga were deployed since Thursday night to face the Iraqi forces’ threat.”

Rasul, a veteran Peshmerga commander was interviewed by Rudaw, and said that “there are threats by the Iraqi army that has deployed forces near Kirkuk supposedly to attack Kirkuk. But I don’t believe it will be easy for them to do that.”

“We do not want war, and we seek to solve problems through dialogue,” the Kurdish commander continued.

“We are not afraid of anyone’s threats, because the Peshmerga, as it is evident from its name, means dying for victory.”

Iraqi Prime Minister Haider al-Abadi stated that “We will not use our army against our people or fight a war against our Kurdish and other citizens,” following a warning issued by the Kurdish officials. Officials in Kirkuk claimed that the Iraqi army in conjunction with Shia militias had been planning a major attack.

Rudaw reports that a prominent Shia commander stated that they were on alert to launch an attack on Kirkuk at the command of PM Abadi.

VP Rasul called on the international community to intervene in this matter to make sure that a major conflict does not break out.

Reports about a possible confrontation come during the wake of the controversial independence referendum held in the Kurdistan region of Iraq, in which voters voted for an independent Kurdish state.

Baghdad referred to this referendum as illegitimate and unconstitutional.

Dana White, Chief U.S. Defense Department spokesperson, addressed these tensions to reporters and reiterated that the U.S. is focusing efforts on the Islamic State group and encourages both parties to do the same.

The Iraqi government has responded that their forces are mobilizing to attack the Islamic State group and that they do not plan to attack Kurdish forces near Kirkuk.