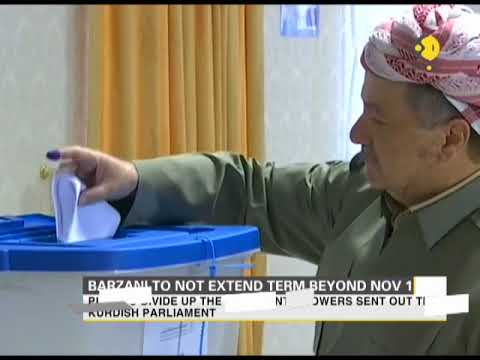 Kurdistan President Massoud Barzani has written a letter to the parliament of Iraq’s Kurdistan Regional Government announcing that he will not run for president again and will go out of office on November 1 as his much-extended term of office ends.

Barzani had taken heart from the collapse of the Iraqi military in 2014, when it ran away from the ISIL advance in Mosul. For three years his Kurdistan Regional Government, formed from three provinces of Iraq, did not even have a border with territory controlled by Baghdad. Kurdistan’s Peshmerga paramilitary occupied the oil-rich province of Kirkuk, even though its status was supposed to be decided by referendum according to the Iraqi constitution. His argument that he therefore kept Kirkuk and its petroleum riches out of the hands of ISIL has some merit. Abadi wanted it back now that the crisis was passing. Barzani thought Baghdad paper tiger, and so in September he pushed through a referendum on Kurdistan independence, against the advice of all his senior advisers and of the United States. If asked, Iraqi Kurds will say they want independence, and that is how they voted.

It turns out that President Barack Obama’s plan to rebuild the Iraqi army was unexpectedly wildly successful. Not only did the army defeat ISIL in city after city, taking Mosul and Hawija, but it gained the experience, strategic acumen and American weaponry to pose a serious threat to the Kurdistan Peshmerga, who had apparently gotten soft in the past half decade. It is also true that the Iraqi Army was supported by Shiite militias, some of them trained by Iran.

Abadi pressed the issue by demanding the return of Kurdistan to Baghdad’s control, and then he sent in troops to make that happen. Kirkuk was largely guarded by the Peshmerga from the Patriotic Union of Kurdistan, based in Sulaymaniya, which is under the control of the Talabani family, rivals of the Barzanis. The PUK and its military declined for the most part to fight the Iraqi army, and so the latter was able to wrest Kirkuk from Iraq over the course of a couple of days. The allegation that this move against Kurdistan was orchestrated by Iran seems to me silly. Baghdad wanted Kirkuk back. Iran gave some help to the Shiite militias, but this campaign was Abadi’s baby.

People in Kurdistan blamed Barzani for upsetting the apple cart with his referendum. Kurdistan has de facto autonomy, and few could understand why Barzani took the risk of destabilizing it by demanding de jure independence. The province is landlocked and depends on Turkey for the pipeline through which it exports oil. It is vulnerable to Iraqi government attack.

You have to wonder if Barzani thought Trump would support him. If so, he was badly disappointed. Secretary of State Rex Tillerson sided with Baghdad on the Kirkuk issue.

Since it is unclear when new presidential elections can be held, Barzani does not have an obvious successor. He appears to be urging that his presidential powers be distributed among the three branches of government– the judiciary, the legislature, and the now leaderless bureaucracy.

With the rise of a new generation of the Talabanis, his tradition rivals and partners, Barzani has serious and effective critics. And he was revealed not to control the Peshmerga. Abadi so humiliated him that he had to step down.

Massoud Barzani’s father, Mustafa Barzani, spent decades working for Kurdish independence in Iraq and Iran. Massoud Barzani was born in 1946 in the Republic of Mahabad, the short-lived independent Kurdish state carved out of northern Iran at the end of WW II with the support of the Soviet Union. The Truman administration backed the demands of Iran that the Soviets withdraw from northern Iran, which they had occupied during the war with Anglo-American approval (Iran was used by the allies to resupply the Soviet Union since it had good rail links with the latter). So the Mahabad Republic evaporated and Iran’s Kurds went back to being under Iranian rule. The Barzanis returned to Iraqi Kurdistan, heading the Kurdistan Democratic Party, which Massoud Barzani took over in 1979.