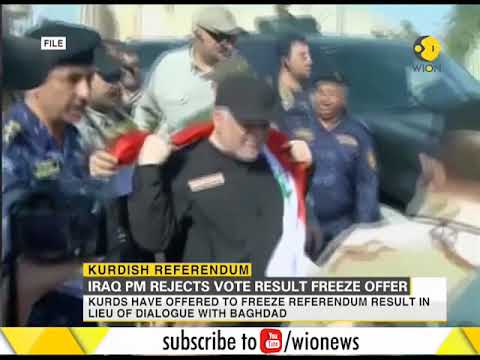 Iraqi Prime Minister Haydar al-Abadi was in Tehran on Thursday for consultations with the Iranian government (no, Abadi isn’t afraid of Trump.). During his meeting with Iranian vice president Ishaq Jahangiri, his office released a statement replying to Massoud Barzani.

Barzani is the president of the Kurdistan Regional Government, an autonomous super-province of Iraq that recently tried to secede. After losing Kirkuk to the Iraqi army last week, Barzani issued a statement that he was suspending the results of the referendum on independence.

Abadi, however, is playing hardball. He said of the Kurdistan independence referendum, “The referendum was conducted during the time when we were engaged in a war on Daesh (ISIS, ISIL). After we united to fight the organization, and we warned against conducting it [the referendum].”

He said of the Iraqi military advance into Kirkuk, that the Iraqi Arabs considered the extension of Baghdad’s control into Kirkuk to be a victory for all Iraqi people. “Our strategy,” he said, ” Is to subordinate those regions to the authority of the [Federal] state, and we will accept nothing less than the complete annulment of the referendum, and adherence to the constitution.”

He added, “Strengthening relations between Iraq and Iran is important not only for us but for the entire region, and its security, stability and efflorescence. We call for cooperation and mutually beneficial exchanges in the service of our peoples, and an end to the interventions that led to more destruction and victims and displaced persons. For this reason we propose development instead of clashes and conflicts among the states of the region, so that its wealth and power can be spread around. We must invest in the power of our youth, which terrorist gangs attempted to attract away from us.”

One of Abadi’s aides had written on Facebook, “They speak of freezing the referendum, but we say to them that the referendum is history, and its time on earth has come to an end.”

The Kurdistan Regional Government had on Wednesday offered to freeze the outcome of the referendum (where 92 percent of Iraqi Kurds voted to secede), as a basis for dialogue with the Baghdad government.

In other developments, the office of KRG president Massoud Barzani on Thursday categorically denied a rumor making the rounds that he intended to resign. Barzani’s term as president has long since ended and conditions haven’t allowed new elections. But he has been acting high-handedly, and his quixotic decision to hold a referendum on independence was the last straw for many Kurds. His political future is certainly in doubt.