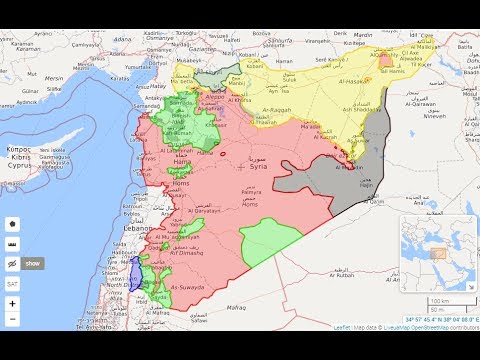 The so-called Islamic State group of Syria and Iraq, which locals call Daesh (in US, it is ISIS or ISIL), needs a new name. It hardly exists in either of those countries, much less as a state. Maybe “Losers anywhere” would work for them.

The extremists, who genocided the Yezidi Kurds and ruined hundreds of thousands of lives, are still dangerous, the way rattlesnakes are when driven from their nest. They are going back to their roots as a small terrorist organization and revenge is on their minds. One strategy members of defeated social groups sometimes adopt is to “haunt” the victors by harassing them.

The viciousness of Daesh was demonstrated once again in Qaryatayn, Syria. A small town of 15,000 on the road from the capital of Damascus to the central city of Homs, it has lived the Syrian civil war as though on a see-saw. In ordinary times it would just be a two and a half hour drive from Damascus.

Its city elders initially tried to stay neutral, but the town is on north-south routes that made it key to smuggling arms or the movement of people (deserters from the Syrian Arab Army of the Baath regime of Bashar al-Assad headed north through it).

In 2015 Daesh took over the town and terrorized its inhabitants, demanding absolute loyalty to its crackpot medieval ideas. There were a lot of Christians in Qaryatayn and its environs, whom Daesh abused and chased out of their homes. They destroyed a historic church.

Then last March, 2017, the Syrian Arab Army took it back. The SAA is spread very thin, however, and around the first of October Daesh infiltrators got back into the town and took it over. On Saturday, the Syrian government recovered it with the help of the Shiite Lebanese militia Hizbullah and perhaps Iraqi Shiite militias as well.

What did they find? 128 bodies of townspeople whom Daesh terrorists accused of having collaborated with Damascus. D’uh, they were under Syrian government control from last March.

As the SAA troops and their militia allies closed in on Qaryatayn late last week, Daesh cultists summarily executed some 83 people in the town on charges that they were enabling the government advance somehow. The paranoia and rodent-like fear of the terrorists is palpable in this act of viciousness and desperation.

It wasn’t the only such incident. After they took back parts of Deir al-Zor from Daesh, the Syrian Arab Army found over 200 victims in a mass grave.

Last week, the leftist Kurds of the YPG announced that they had completely taken Raqqa in eastern Syria, the capital of Daesh/ISIL. The terrorist organization thus no longer controls significant territory.