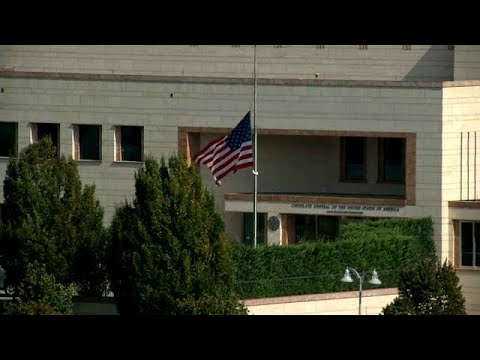 The US and Turkey have ceased processing non-immigrant visas for one another’s citizens. That’s right. If you’re an American and were planning to visit Istanbul this fall, unpack your bags.

In a world of abnormal goings-on, this one is really weird.

Turkish President Tayyip Erdogan has used the failed coup attempt of July 15, 2016, as a pretext for moving his country away from democracy and toward an illiberal authoritarianism. He has closed universities and newspapers, jailed journalists, dissidents and academics, and fired 150,000 people from government jobs. The Turkish government maintains that the coup was led by military officers from the Hizmet movement of Fethullah Gulen, a rightwing religious leader who fled Turkey in the late 1990s and lives in Pennsylvania. Only a fraction of those persons targeted, however, have been Gulencis (200,000 people did not act as coup plotters).

Members of the Turkish cabinet have openly charged Barack Obama with having been behind the coup, which is ridiculous. A billionaire crony of Erdogan attempted to buy influence with Trump by hiring the security firm of Michael Flynn, Trump’s first National Security Adviser. Flynn allegedly thought seriously about kidnapping the elderly Gulen and rendering him back to Turkey for trial. As it happened, Flynn was fired for not disclosing the extent of his foreign emoluments.

Since Flynn’s departure, US relations with Turkey have plummeted. Ankara abhors the US strategy of depending on the Syrian Kurds to defeat ISIL in Raqqa, fearing that armed and trained Kurds will turn separatist and make trouble over the border in Turkey. Erdogan’s bodyguards have beaten protesters on US soil whenever he has come to the US, viewing all of them as Gulenist terrorists, and the bodyguards were indicted, causing Erdogan to squawk.

But then a couple of weeks ago, Turkey arrested a US embassy employ of Turkish origin on grounds of being a Gulenist and hence a terrorist.

You can’t go around arresting embassy employees; international law frowns on that sort of thing.

So the US cut off all Turks from coming to the US except on immigration visas. Trips for tourism or business are no longer possible. Then Turkey reciprocated.

All this hurts Turkey economically in a way it does not hurt the US. Some 13 percent of Turkey’s GDP comes from tourism, which has taken severe hits the last couple of years. American tourists are a small percentage of the total traveling to Turkey, but American businessmen have lots of investments in the country. Erdogan boasted of having attracted $20 billion in foreign investment in his first decade in power as prime minister.

One of those investors who can no longer go off to inspect his property in Istanbul is Donald J Trump.

Turkey and the United States have been allies since the beginning of the Cold War between the US and the Soviet Union in the late 1940s. Turkey was a recipient of Marshall Plan rebuilding funds and was brought into NATO. Turkish troops fought alongside American ones in the Korean War and the Afghanistan War. Turkey’s Incirlik Air Base has been a key asset for US air power in the Eastern Mediterranean.

The Neoconservatives of the early 2000s even counted Britain and Turkey, both allies of the US and of Israel, as the only two permanent friends the United States has.

Now the US-Turkey special relationship is in shambles.

As far as I can tell, the main blame for the deterioration of relations between the US and Turkey lies with the paranoid style of Erdogan and his officials.

It may also be, however, that Trump has cut such a bizarre figure that neither Turkey nor anyone else is afraid of the full might of the US at all any mor