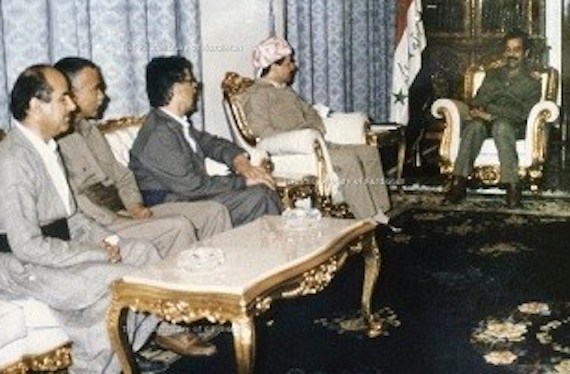 Saddam Hussein is making a comeback in Iraq – well, at least on Iraqi social media he is. Despite the fact that the former Iraqi leader, who was executed for crimes against humanity in 2006, is generally reviled by locals in the country, Hussein’s deeds and words are being used in the online battle of opinions over the Iraqi Kurdish referendum on independence.

On September 25, residents in the semi-autonomous, northern region of Iraqi Kurdistan voted on whether they should secede from the rest of Iraq. The outcome was hardly surprising: Statehood is a long-held dream for Iraq’s Kurds and other Kurds elsewhere, and around 92 percent of voters said they wanted Iraqi Kurdistan to drop out of the country. The reaction was also hardly surprising: Baghdad had said the referendum should not take place and after it did, they began to impose various restrictions on the northern region.

Politicians use those emotions because there is a belief that to distract the public from issues like government services, corruption or lack of security, one should create a “permanent enemy”.

No matter the Kurdish politics behind the referendum – which are messy, self-serving and possibly not even democratic – the referendum itself was a massively emotional issue for locals. In Iraqi Kurdistan, voters celebrated and remonstrated with those who did not vote. In Iraq, the opposite happened: Many locals were upset and angry at their Kurdish neighbours. And that was when Saddam Hussein began to pop up again on social media.

“Breaking news,” one sarcastic wit wrote on Facebook. “Saddam Hussein will address the Iraqi people this evening, about the Kurdish referendum on independence. Watch out for it!”

Iraqis posted videos and news clips as well as pictures from Saddam Hussein’s regime, using the same rhetoric that deposed leader once used against the Kurds.

One Facebook page, for instance, posted a video of Saddam Hussein talking about how he rejected the idea of Kurdish independence; the video dates back to the 1970s. Other Facebook pages showed videos of speeches from the 1990s during which Hussein attacked Kurdish politicians as well as news reels of his visits to the Kurdish area in the 1980s.

Iraqi Kurdish social media also harked back to Hussein’s time but they went at it from the other end of the spectrum, posting pictures of Kurdish locals fleeing into the hills, under attack from Hussein’s military. Many Kurdish users of social media kept arguing that today’s government in Baghdad is not so different from Hussein’s when it comes to the Kurds.

There were also popular songs posted from before 2003, including one Kurdish tune that actually praises Saddam Hussein. Opponents of the independence referendum promoted this particular ditty.

While he was in power, Hussein treated the country’s Kurds abominably. The Anfal military campaign he oversaw in the 1980s aimed to get rid of the Kurds in Iraq; it is recognized as genocidal campaign by several countries. The use of chemical weapons in Halabja in northern Iraq, in 1988, resulted in thousands of civilian deaths.

The Arabs and Kurds of Iraq who lived through these terrible events remember them. However, it seems that many younger Iraqis, either born after the Anfal campaign or after Saddam Hussein was removed from power in 2003, are ignoring that.

“It’s somewhat ironic,” says Irada al-Jibouri, a media professor at Baghdad University, “because most of the users of the social networking sites [such as Facebook] who are either praising or cursing Saddam Hussein did not live under his regime. These young people are driven by certain ideologies or by religious beliefs that have more to do with emotion than logic.”

The mere mention of Saddam Hussein is usually enough to start a round of insults, arguments and recriminations on Facebook. This was no different, with Kurds and Arabs trading barbs online. And politicians use those emotions, al-Jibouri continued, because there is a belief that to distract the public from issues like government services, corruption or lack of security, one should create a “permanent enemy”.

“Social media is playing a role in fuelling hatred between Iraqis and often it is due to ignorance,” Samir al-Shaykhli, a local sociologist, told NIQASH. “Iraqis online are not searching for the truth, they are searching for anything that will support their own views and biases.”

Al-Shaykhli says he is worried that the country’s most divisive issue has changed. Once locals worried about sectarian problems – that is, fights between Sunni Muslims and Shiite Muslims – but in some ways, a forced unity in the fight against the extremist group known as the Islamic State had eased that somewhat. The new problems are ethnic, between Iraq’s Arabs and Iraq’s Kurds.