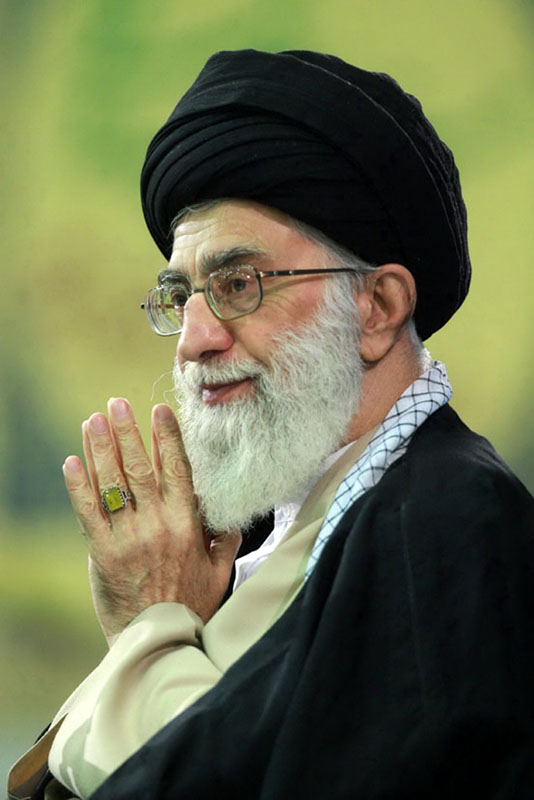 Iran’s clerical Leader, Ali Khamenei, said on Wednesday that he did not intend to engage in a tit for tat with Donald Trump, who had attacked Iran in a speech last week.

“Naturally, I do not want to spend time right now in replying to the fables and falsehoods of this charlatan president of the republic. . .” He added that replying to such as Trump is “a waste of time.”

He complained that the US has gone about roiling the Middle East, supporting Israeli oppression of the Palestinians and of Lebanon, and creating ISIL [this is a false allegation — JC] and supporting extremist groups that routinely excommunicate Shiites and other Muslims from the religion. He said the US regime is angry with Iran because Tehran had foiled their dastardly plots in the region, including in Lebanon, Syria and Iraq. He quoted sardonically former secretary of state Condi Rice’s saying that a new Middle East is being born. Sure it is, he said, and it isn’t the one Washington imagined.

Khamenei said that the new US president had shown himself to be a moron, but nevertheless, Iranians should not let their guard down in the face of the sly tricks of the US.

He seems worried that Iranians will discount the danger the US poses to the Iranian state because the American leader is clearly a stupid individual.

He said that there will be no conventional war, but that things might take place that are just as important.

He complained that the US threatened enmity if Iran did not sign the nuclear deal, but after Tehran signed, the enmity redoubled.

He praised European countries for standing by the nuclear deal. He said that Iran welcomes European steadfastness in the face of Trump’s threats to simply tear up the deal. But, he said, standing by their own treaty is not enough. He pointed out that the deal is in the interest of the Europeans and the Americans.

He added of the Europeans, “We also naturally said that as long as this side does not tear it up, neither will we.” If it is torn up [by Europe] then Iran will also shred the agreement. (US news outlets are mistranslating this part as saying that If Trump tears up the deal, so will Iran; Khamenei is clearly speaking of Europe here).

That is not enough, he said. If the US Congress contravenes the agreement by imposing substantial new sanctions on Iran, he said, he expects the Europeans to step up and foil them. He rejected Western concerns about Iranian missiles, on the grounds that all the Western countries also have rockets and missiles and no one is sanctioning them over it.