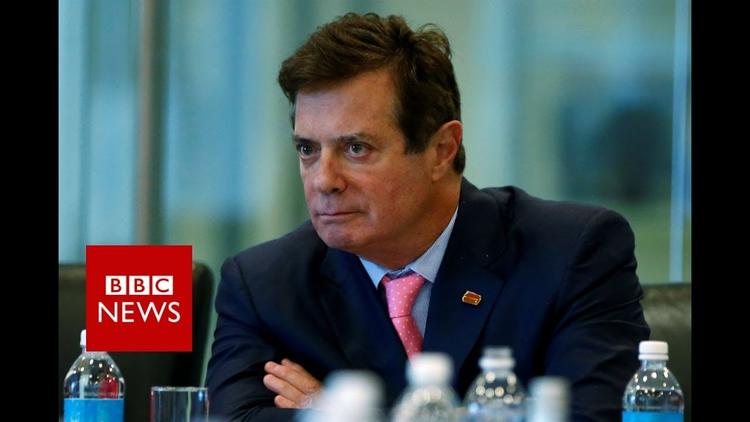 Yesterday the former chairman of President Trump’s presidential campaign and the architect of last year’s Republican National Convention got up, got out of bed, drank his coffee and went to jail.

Shortly thereafter, one of the president’s erstwhile foreign policy advisors was revealed to be a cooperating witness in a widening investigation into possible collusion with Russia. The first development was expected, but the second appears to have caught the president’s team completely off guard, as Press Secretary Sarah Huckabee Sanders was frogmarched to the podium with instructions to stage a new version of the Vietnam War’s five o’clock follies. America’s second-greatest liar put on her signature, faux-urbane eyebrow-furrow and proclaimed that “If any collusion took place it was with the Clintons.”

The days to come will be filled with breathless analysis of these indictments, as well as the inevitable ratcheting up of the war on Mueller himself being cooked up in the right-wing Feverglades. Like nearly every week since President Trump took office in January, this one will feel like an unpleasant mashup of an all-night rave and jury duty.

It is important not to let the coming circus obscure the underlying reality: yesterday’s revelations, and the promise of more to come, are dreadful news for the worst elements of the Republican Party. How this ignominious pack of thieves, malefactors and swamp creatures reacts to the galloping disaster of their future electoral fortunes could make or break the American democratic experiment.

Paul Ryan, Mitch McConnell and every Republican in Congress should have known how their little sojourn with Trump would end the minute they climbed into bed with him. A man whose desultory public life was riddled with undisputed wrongdoing and graft and a litany of disgusting comments, President Trump took office mired in a level of scandal that was utterly unprecedented in American history. More than a dozen women had publicly accused him of sexual harassment or assault, a cacophony of ugliness so pervasive the president and his apologists didn’t even bother with rebuttals to the individual accusations.

During the campaign he publicly invited the Russian government to hack his opponent’s emails, used illegally obtained information in his speeches, threatened to jail his opponent and then just after the election settled a fraud case related to his fake university for a staggering $25 million. Despite credible allegations that he was highly leveraged to Russian creditors and that his properties in the past had, at minimum, been used by Russian money launderers and gangsters, he refused to release his tax returns to the public, an issue he continues to sidestep to this day.

Move along, said the Republican Party. We have deeply detested policy proposals to inflict on the 65 million Americans who voted against us. Carpe diem.

Many of Trump’s announced picks for cabinet positions, notably Health and Human Services Secretary Tom Price and Treasury Secretary Steve Mnuchin, had ethics backgrounds that one could charitably call problematic. His first National Security Advisor, Retired Gen. Michael Flynn, was notoriously batty, had been dismissed from his position as director of the Defense Intelligence Agency for misconduct, and was suspected of illicit contacts with Russian intelligence as well as damaging connections with the authoritarian government in Turkey.

These corrupt men proceeded to treat their offices like corporate expense accounts, unapologetically wasting millions of tax dollars to take private jets for everything from routine travel to picking up the Chinese takeout at the corner shop. The shiftless miscreants the president appointed to oversee the workings of the federal government have gutted the State Department, destroyed morale at every single agency, and overseen a shockingly negligent response to Hurricane Maria in Puerto Rico that has already left a thousand Americans dead and an entire island left to the mercy of con men and malicious incompetents. Graft and destruction are their raison d’etre. They have performed their task with an almost ghoulish elan, shocking even by the standards of the contemporary Republican Party.

Everything that President Trump and his congressional allies have done since taking office has driven their already awful public reputation further into the sub-basement of popular disdain. To understand what an upside-down achievement this truly is, consider that the economy is in the best shape it has been all century (this is not, of course, to be confused with an endorsement of today’s economy), with unemployment claims near 4%, the stock market at an all-time high (the Dow 36,000 guy must be breathing a Malthusian sigh of relief), and consumer confidence soaring. The president generally gets good marks for his handling of the economy, because thus far his corrupt oligarchs have done little to disturb the peace of the capital markets that have delivered Gilded Age inequality to the Republican Party’s donor class.

One measure of the GOP’s position tottering on the edge of an electoral abyss is the “generic congressional ballot” polling performed by a number of organizations, which asks voters whether they would prefer a Democrat or Republican to represent them in Congress. At this stage in the 2006 midterm cycle (November 2005), the five most recent generic ballot polls averaged out to +9 points for Democrats in a race they won nationally by 7.9%. Today the average is +10.7. In early November of 2009, Democrats held a slim advantage in the polling average of 3.5% — they would go on the following year to an epic shellacking, losing 63 seats in the House in one of the worst electoral defeats in modern American history. Similarly in 2013, Democrats held a 4.6% lead in another race that would end with a bruising calamity. In every case, the numbers got significantly worse for the party in power over the subsequent year leading up to the actual election.

These numbers should terrify Republicans. Their doddering clod of a president is sitting on a 33% approval rating, and Special Counsel Robert Mueller is preparing a stack of additional indictments for Trump associates in an investigation that seems to get worse for Trumpworld with every passing day. Trump’s handmaidens in Congress face a lose-lose scenario, in which continued ineptitude and failure to achieve a single tangible policy goal will collapse turnout with a base hooked on mainlining Fox News and Breitbart propaganda, while actually implementing the party’s hardline platform will alienate the critical independent voters needed to sustain their ill-gotten power.

Their answer thus far is to pretend that worst scandal in American history – a presidential candidate’s team colluding with a hostile foreign power to undermine popular trust in the electoral process and deliver a victory – never happened, and have resurrected a preposterous conspiracy theory to redirect the public’s anguish at Democrats. To believe this theory – that career civil servants in multiple agencies of the United States federal government conspired with the Republican-appointed FBI Director to malign Trump and throw the election to the Democrats, you must believe that a) James Comey was in on the ruse, but somehow decided to kick the election to Trump anyway with his idiotic Dear Jason Chaffetz letter on election eve, b) that none of the hundreds of people who had to have been in on this plot have said a word about it to anyone and that c) the Clinton campaign, having worked, curiously, with Russia to release damaging information about the candidate herself, decided to keep the juiciest nuggets of the Steele Dossier secret until after the election. Also something something Uranium One. If you believe all that, I have a spot open at my new university just for you.

What has happened is that the Republican Party’s ideological bankruptcy has converged with it’s moral chasm to create an organization unconstrained by shame, accountability or public spirit. Whatever else they are, our GOP overlords aren’t stupid. They can read their own internal polling and they know what it’s telling them. What they do with that information could complete America’s transformation into an illiberal democracy if they choose to engage in more voter suppression, or if they go further and cross the Rubicon into actual vote fraud. They know the only thing standing between Democrats and a sweeping electoral victory is the right’s control of election mechanisms in swing states. Democrats must be prepared, then, to fight and win at a disadvantage, and to ensure that if Robert Mueller is fired by the president, that every day between now and 2018 is treated like the constitutional crisis that it is.