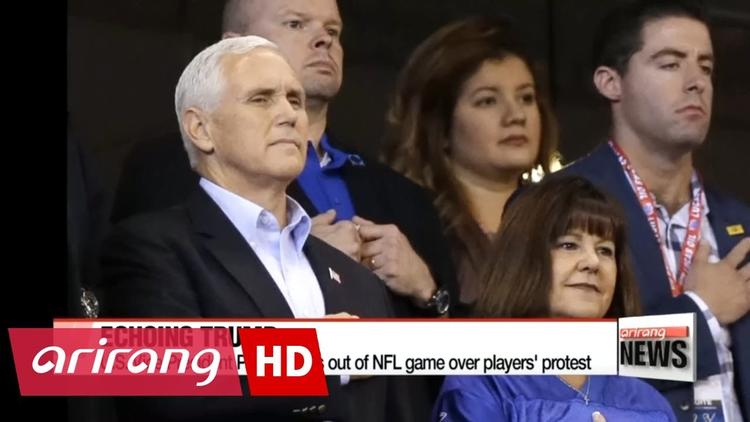 “I left today’s Colts game because I will not dignify any event that disrespects our soldiers, our Flag, or our National Anthem,” Pence said.

Members of the National Football League who have collectively lodged symbolic protests against police brutality and racism during the U.S. national anthem by “taking a knee” faced a new counterprotester in Indiana: U.S. Vice President Mike Pence.

Pence was attending a game between the Indianapolis Colts and the San Francisco 49ers. According to the former Indiana governor, he had also attended the game to watch Peyton Manning’s jersey retirement ceremony.

During the game, Pence tweeted a photo of he and his wife smiling as they watched a football game.

The photo, however, proved to be identical to one he tweeted on November 23, 2014, before a Colts game against the Jacksonville Jaguars, according to the Indy Star

Some players from the 49ers kneeled during the Star Spangled Banner, while some Colts wore black T-shirts with the words “We Will” on the front and “Stand for equality, justice, unity, respect, dialogue, opportunity” on the back.

The players stood with their arms locked during the anthem, according to media reports.

“I left today’s Colts game because President Trump and I will not dignify any event that disrespects our soldiers, our Flag, or our National Anthem,” Pence said in a statement issued by the White House.

President Donald Trump has taken to Twitter to blast players taking part in the protests, controversially telling NFL team owners that they should ban any player who kneels during the anthem and “Get that son of a bitch off the field.” He said in a tweet on Sunday that he asked Pence to leave the stadium “if any player kneeled, disrespecting our country.” He said he was proud of Pence and his wife, Karen.

Pence, who has gone out of his way to demonstrate loyalty to Trump amid signs of discord within the White House, said in his statement it was important to rally around the flag and things that unite the country.

“I stand with President Trump, I stand with our soldiers, and I will always stand for our Flag and our National Anthem,” Pence said.

Critics of players kneeling at the pre-game playing of the national anthem object to any protest, regardless of its merits, during the anthem.

“It seems pretty clear what Trump and the former governor of Indiana’s plan here was,” Frank Schwab of the NFL Shutdown Corner blog said. “The national anthem protests have been a storyline all season. So for the duo to act shocked to see a protest when Pence showed up to a game — at great taxpayer expense, no less — seems pretty disingenuous.”

Indeed, Pence was scheduled to walk out of the game in order to catch a flight to attend a political fundraiser in Los Angeles, it was later revealed.

“Attacking NFL players for peaceably protesting seems to be an easy way for President Donald Trump and his administration to rally support,” Schwab continued. “It’s incredibly disingenuous to make this a story of the players being anti-military, because at no point in any protest have any players ever said they were against the military.”

The right to participate in such a protest is protected by the U.S. Constitution’s First Amendment. The NFL declined to comment, said spokesman Brian McCarthy.

Trump’s opposition to the protest has galvanized national opinion on the issue.

“I really think that, when the announcer in the stadium says, ‘Rise to honor our veterans,’ by no means is (Colin) Kaepernick, or anyone taking a knee, in any way wanting to dishonor the service of police officers, or people who are fighting in our wars,” Melvin told NPR. “But it’s an injustice that’s happening in our streets, it’s an inequality, it’s things that have been stemmed from slavery and the Constitution and the Declaration of Independence, all of these foundational documents that define our democracy. That’s what matters.”

Some football fans have recently shouted ethnic slurs at players including the “N-word,” as was the case Monday before Washington Redskins wide receiver Terrelle Pryor was caught on video flipping his middle finger and shouting in anger at the football stands as he left a Kansas City game.

The 28-year-old Pryor said he was initially put off by a fan calling him the “N-word” during the Redskins’ 29-20 loss. He insisted on Instagram that he was called the racial slur “several times to the point where an NFL employee had to step to me and stand by me the whole game from second quarter on is the exact reason why guys are kneeling during the anthem.”

Pryor, for the record, stood for the national anthem.

Arirang News: “Trump claims to have told Pence to walk out of NFL game”