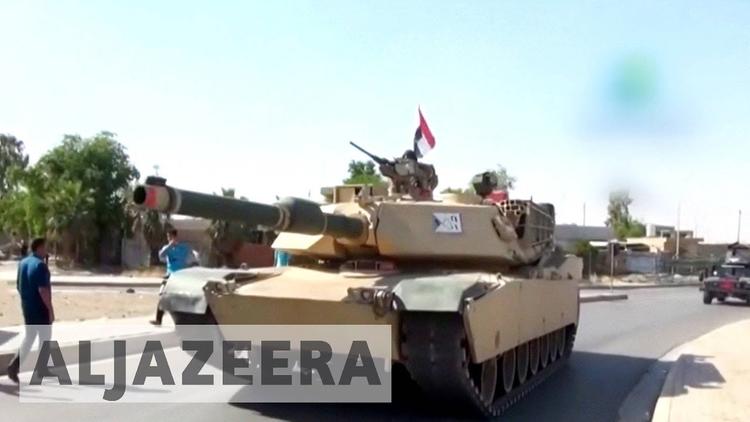 The Iraqi Army and its Shiite militia adjuncts have taken Kirkuk city and raised the Iraqi flag over the state house, taking down the Kurdistan flag. They also have an army base and oil fields in Kirkuk province, which they are returning to the control of Baghdad after it was annexed by the Kurdistan Regional Government (KRG) in 2014.

The Kurdistan paramilitary, the Peshmerga, are vowing that Arab Iraq “will pay a heavy price” for militarily retaking Kirkuk.

The Beltway Bandits are alleging that Iran was behind Baghdad’s retaking of the province of Kirkuk from the KRG. Iran played a role, but the allegation is just silly. Iraqi Prime Minister Haydar al-Abadi couldn’t have survived politically if he had not taken Kirkuk back, and it was the Baghdad government’s idea. Iraqi army infantry and armored divisions were deployed. The Shiite militiamen who fought alongside government troops had Iranian training and advice, but they were adjuncts, not the main force.

Since Donald Trump just tried to designate the Iranian Revolutionary Guards Corps as a terrorist organization, the inside-the Beltway think tanks are suddenly finding it under every bed, along with consulting gold. It is true that Iran wants to take the Iraqi Kurds down a notch, for fear its own Kurds will get uppity. The IRGC is influential for the Badr Corps and the Interior Ministry in Iraq. But the Ministry of Defense reports to Abadi, and he was the driving force here.

The Kurds had predominated in three provinces in the old Iraq. After the Gulf War they more or less seceded and made their three provinces into one super-province. It was uneasily reintegrated into American Iraq from 2003. In September 2017, the Kurds tried to declare independence and they tried unilaterally to add a fourth Iraq province to their KRG. Baghdad would naturally react against this threat of secession. I am not saying Kurds don’t deserve their own state; I am saying that President Massoud Barzani of the KRG was being unrealistic. He heads a small territory that is landlocked and depends on others for export of its petroleum. Since those neighbors didn’t want the referendum, why be surprised at his difficulties? I was against the US dividing up Iraq when it was the occupying power, but now that Iraqis are sovereign it is up to them to negotiate their conflicts. I certainly I understand after everything Saddam Hussein did to the Iraqi Kurds why they want independence. And the downside of Abadi’s invasion of Kirkuk and the fleeing of Kurds from the province is that it reminds Kurds of how the old Baath army used to behave.

So how did all this happen?

1. The vacuum in US leadership meant there was no one with any authority to tell Massoud Barzani not to hold the referendum on independence. Even in the midst of this crisis, Trump yesterday declared himself as neutral as Switzerland. If the neutrality were so Trump could swing into action as a mediator, that would maybe be useful, but he appears not to have the slightest interest in getting involved. Not since 1940 has the US stood aside as a minor, neutral player in the midst of important crises.

2. The Kirkuk oil fields were doing 800,000 barrels a day of petroleum production before 2014, and while they are small and old compared to the Rumaila fields near Basra, no Baghdad government was going to let the KRG unilaterally just walk off with that resource.

3. Both Sunni and Shiite Arabs in Kirkuk, a plurality of the population, minded the KRG annexation of 2014, and if Abadi’s Baghdad government wants to get back the allegiance of the Sunni Arabs, it has to show decisiveness on this issue.

4. The Iraqi Army had many weapons and much training from the United States (given to fight ISIL), and they used this American-supplied weaponry at Kirkuk. The US military is upset that its weapons are being used against the Kurds and have threatened to stop supplying them to Baghdad..

5. The Kurds were divided. Three major parties dominate the politics of the Kurdistan Regional Government. These are the center-right Kurdistan Democratic Party (KDP) of Massoud Barzani, the center-left Patriotic Union of Kurdistan of Bafel Talabani, and the progressive, anti-corruption Party for Change (Gorran) of Omar Said Ali. It was Barzani’s KDP that spearheaded September’s referendum on Kurdistan independence, and while the others went along with it in public, there are rumors that they were unenthusiastic about the likely fall-out of Barzani’s adventurism. These divisions are one explanation for the events in Kirkuk.

6. The southern part of Kirkuk province and the city of Kirkuk were in the hands of the PUK paramilitary or Peshmerga. PUK commanders abruptly withdrew before the Iraqi Army’s advance and that of the Shiite militias. Kurdish media outlet Rudaw said, “The KDP media have blamed the armed forces of the Patriotic Union of Kurdistan (PUK) of having first “abandoned” their positions on the outskirts of Kirkuk.” (BBC monitoring). Some are alleging that the PUK made a separate deal with the Iraqi Army to withdraw. Certainly, rank and file Peshmerga troops say they were abandoned by their officers as Iraqi forces neared the city of Kirkuk. They say, however, that both PUK and KDP Peshmerga commanders faded away. It seems likely that the PUK Peshmerga officer corps considers Barzani’s move to independence to be an unwise stunt, and they refused to die for Barzani’s ego.