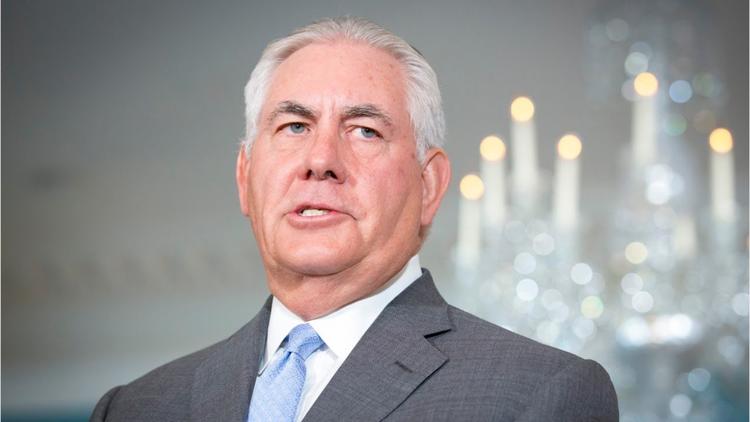 “Popular Mobilisation fighters should be encouraged because they will be the hope of country and the region,” Abadi said.

Iraqi Prime Minister Haider al-Abadi has defended the role of his country’s Popular Mobilization Forces, or Hashd al-Sha’abi, following a statement by U.S. Secretary of State Rex Tillerson that members of the paramilitary force should “go home.”

Tillerson arrived on Monday hours after the prime minister’s media office rejected the call to demobilize the Popular Mobilization, who played a crucial role defeating the Islamic State group and helped Baghdad capture the Kurdish-held city of Kirkuk.

In his opening remarks at the meeting with Tillerson, Abadi said that Popular Mobilization “is part of the Iraqi institutions,” rejecting accusations that it is acting as an Iranian proxy.

“Popular Mobilisation fighters should be encouraged because they will be the hope of country and the region,” he said.

Tillerson had previously said Iran and other countries participating in Iraq’s fight against the Islamic State group need to depart the Arab country now that the battle was drawing to a close.

“The foreign fighters in Iraq need to go home and allow the Iraqi people to regain control,” Tillerson said in the Saudi capital, Riyadh, on Sunday.

Tillerson delivered the comments following a joint meeting with the leaders of Iraq and Saudi Arabia.

The PMF is comprised of dozens of organizations, including Sunni Muslim, Yazidi, Christian and Shiite Turkmen groups. The groups have been excoriated as a sectarian tool of Iran due to the heavy representation of Shia Muslim organizations. Shi’ites form a plurality among Iraqis.

“No party has the right to interfere in Iraqi matters,” Abadi’s media office said in a statement prior to Tillerson’s visit.

Shia militia include those who ideologically align with the Islamic Republic of Iran such as the Badr Organization, who worked with U.S. troops following the 2003 U.S. invasion, as well as groups like Asa’ib Ahl al-Haq – a paramilitary group that carried out daring operations against occupying forces during the insurrection that followed the collapse of the Iraqi state.

Afghan, Iranian and Lebanese fighters have fought alongside local militia in a regional effort against the transnational extremist that was coordinated with Iran’s aid.

Asa’ib Ahl al-Haq reacted to Tillerson’s comment by saying it would be Americans who will be forced to leave Iraq.

“Your forces should get ready to get out of our country once the excuse of Daesh’s presence is over,” said Asaib’s leader, Qais al-Khazali, according to the group’s TV channel, al-Aahd.

Washington has 5,000 troops in Iraq and provided air support, training and weapons to Iraqi government forces. At the same time, Iran armed, trained and advised the Popular Mobilization Units that often fought alongside the army.

“Exactly what country is it that Iraqis who rose up to defend their homes against ISIS return to?,” Zarif said in a tweet. “Shameful US FP (foreign policy), dictated by petrodollars.”

Speaking from the South African capital Pretoria later in the day, Zarif noted that the administration of U.S. President Donald Trump is “isolated in the world.”

“Unfortunately, the Americans do not want to rectify their viewpoint that Iran is a source of stability and peace as well as a campaigner against terrorism in the region,” he said, according to state-run Iranian news network Press TV.

At his meeting with Abadi in Baghdad, Tillerson urged the Iraqi government and Masoud Barzani’s Kurdistan Regional Government in Erbil to resolve their conflict on Kurdish self-determination and disputed territories through dialogue.

“We are concerned and a bit sad,” Tillerson said. “We have friends in Baghdad and friends in Erbil, and we encourage all parties to enter into the discussion … and all differences can be addressed.”