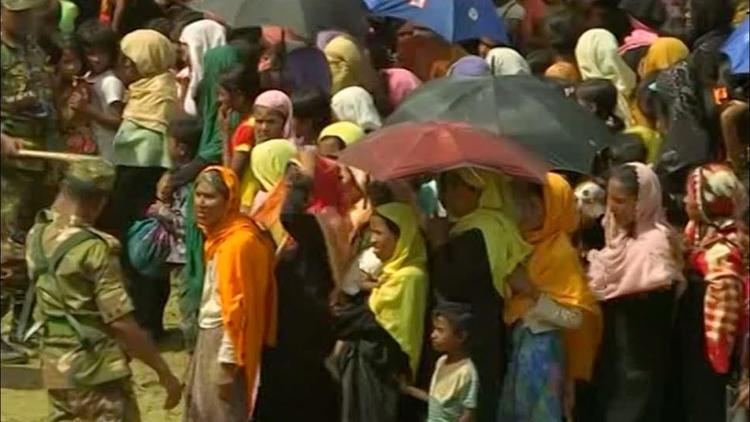 The Rohingya of Myanmar are probably passing through the darkest time in their history, with the international community standing almost idle. While the Myanmar military and militant Buddhist monks are terrorizing this predominantly Muslim minority group and forcing them to mainly flee to neighboring Bangladesh, there is little international action, other than humanitarian assistance, to defend them.

The UN has declared the Rohingya “the world’s most persecuted ethnic minority”. A stateless minority group for over 35 years the Rohingya Muslims were denied citizenship rights under a new citizenship law the Myanmar government enacted in 1982 and refused to recognize them as one of the 135 ethnic groups of the state. They were often subjected to military violence and repressions, most notably in 1978, 1991-92 and as recently as 2012, 2016 and 2017.

Myanmar’s ongoing largescale military operations, partly sparked by the Arakan Rohingya Salvation Army’s attacks on police stations on August 25, have unleashed a massive exodus of 500,000 Rohingya to Bangladesh so far, what the UN has dubbed “a textbook example of ethnic cleansing”. Bangladesh’s Foreign Minister A.H. Mahmood Ali has accused Myanmar government of committing genocide against the Rohingya, who primarily inhabit Myanmar’s northern Rakhine state bordering on southeastern Bangladesh. Human Rights Watch has reported that Myanmar’s military is committing crimes against humanity against the Rohingya.

Stories of countless deaths, arsons and forced deportations reported by the global media notwithstanding, the Rohingya have been unlucky to draw support for international diplomatic and political actions in defense of their rights. Unlike the liberal international outcry for humanitarian military actions in Libya and Syria, no known European or American liberal has called for invoking “the responsibility to protect” to save the Rohingya.

In the past few weeks, the UN Security Council had three closed-door meetings but no action plan emerged from those meetings to manage the crisis. That points to the interplay of global, regional and domestic factors that severely minimizes the immediate prospects for a solution to the Rohingya predicament.

Bangladesh is most affected by the Rohingya crisis, due not only to its geographic proximity but also to some linguistic and ethnic similarities between the Rohingya and the predominantly Bengali-speaking Bangladeshis. Social and cultural enmeshments occurred under British colonial rule of Burma (1824 – 1948), when Bengali working class people were encouraged to migrate to Rakhine for profit-oriented rice cultivation. The Rohingya draw their deep ancestral origins to Rakhine down to the 12th century.

During World War II, the Rohingya fought on the side of the British against the pro-Japan Burmese nationalists and were promised an autonomous state – a Muslim National Area. The British eventually reneged on their promise. Following independence in 1948, the Burmese government started treating the Rohingya as “illegal immigrants.” Most ethnic Burman nationalists and Buddhist monks in Myanmar unquestionably accept and firmly stand behind this governmental position on the Rohingya. That gives some comfortable degree of legitimacy to the anti-Rohingya military crackdown.

Unlike other Rohingya crises taking place since 1948, Bangladesh has been ill-prepared to deal with the current crisis. Reasons for this arise from two main fronts. Domestically, Bangladesh Prime Minister Sheikh Hasina is presiding over a fragile government. Her political party the Awami (people) League won the last parliamentary elections landslide, held in early January 2014. Over half of the seats in the parliamentary (154 seats out of a total of 300) Sheikh Hasina’s party won uncontested since major opposition parties did not participate in the elections. The largest opposition party – the Bangladesh Nationalist Party boycotted the elections creating a legitimacy problem for Sheikh Hasina’s government. The outcome is that there is hardly any national consensus on most serious issues or crises facing the nation, including the Rohingya crisis. The government is incapable of gearing up strong diplomatic efforts regionally or globally, which the Myanmar government is well aware of.

The ruling Awami League is also historically more exposed to pursuing a pro-India foreign policy, an issue the Bangladeshi nationalist forces use to discredit the party. But shockingly for the Hasina government, India, because of its business and strategic interests of infrastructure development and oil exploration, is more favorable to the Myanmar government’s position on the Rohingya crisis. So has been the case with China, a country that has a defense pact with Myanmar, enjoys comprehensive business ties and defends Myanmar against the West at the UN Security Council.

Myanmar knows it can confidently count on China and Russia to thwart any action by the UN Security Council. National security adviser Thaung Tun, while talking to journalists on September 6, said that his government was negotiating with China and Russia to stop the Rohingya issue from going forward. At the third Security Council meeting on the Rohingya crisis on September 28 the Chinese and Russian ambassadors defended Myanmar’s military operations and brutalities against the Rohingya people and refused to admit that ethnic cleansing and genocide were taking place.

Bangladesh definitely figures less in China’s and India’s strategic matrix of choices in Myanmar and generally in South and Southeast Asia. That explains why the Hasina government’s repeated attempts to court India’s support to resolve the Rohingya crisis with Myanmar turned out fruitless. Prime Minister Narendra Modi, after a visit to Myanmar in early September, expressed support for Myanmar’s military operations against the so-called Rohingya militants in Rakhine. In line with Myanmar’s position on the crisis Modi termed the situation in Rakhine “a terrorist problem” and his government is also gearing up efforts to expel some 40,000 Rohingya currently living in India on the suspicion that they have ties to “terror organizations”. The Hasina government realizes that a pro-India foreign policy may not always pay, particularly in difficult situations.

Sheikh Hasina, in her speech to the 72nd session of the UN General Assembly, made an abortive call for creating “safe zones” for the Rohingya in Myanmar without any diplomatic backing from major and great powers – a diplomatic folly at best.

The Muslim world, currently at war with itself, is also playing a disappointing role. There is more rhetoric and less action on the part of the Muslim countries, due to a host of factors. Two of the Muslim world’s archrivals – Iran and Saudi Arabia are deeply involved in a battle for power and influence across the Middle East. Iran also suffers from extra politico-diplomatic constraints due to the Trump administration’s threats to ditch the July 2015 nuclear deal.

The Muslim world also lacks effective diplomatic and political tools to exert influence to produce desired outcomes in crisis situations. The Organization of Islamic Cooperation (OIC) that theoretically protects Muslim unity and interests or the Arab League that has had the mission to safeguard Arab independence and sovereignty (vis-à-vis Israel or the West) are more or less stories of dismal failures. Neither the OIC nor the Arab League could ever take a unified position against or condemn external interventions in Arab or Muslim affairs. The US invasion of Iraq in 2003 on false grounds and the inhumane plight of the Palestinians under Israeli occupation and attacks are glaring example.

Amidst such weaknesses, there were ridiculous calls for creating a Muslim expeditionary force to defend the Rohingya. Iranian Deputy Parliament Speaker Ali Motahar floated the idea in early September. He asked: “Why aren’t we Muslims thinking about forming a NATO-like joint military force that can intervene in such situations?” Good intention though, Mr. Motahar’s call, what closely resonates the call of the jihadists to defend Muslim lives and rights worldwide, was echoed by no other Muslim country, either because it is unrealistic to think of a NATO-like force or because the Muslim countries think the Rohinga crisis is not really so serious to merit such a call. Saudi Arabia’s 34-Sunni Muslim nation military alliance, formed in December 2015 to fight terrorism (in reality to contain Shia Iran’s power), has not so far succeeded in projecting force even in Yemen, let alone the Middle East region.

Turkish President Recep Tayyip Erdoğan, though his country is battered by the Syrian civil war and threatened by the secessionist posture of the Kurdish Regional Government in norther Iraq, initially fired a few shots at the Myanmar government. As the current chair of the OIC, he took the lead to denounce Myanmar’s anti-Rohingya drive and publicly called the military violence genocide on September 2, 2017. Turkey’s stance is partly explained by President Erdoğan’s post-2002 gradual foreign policy shift from the West towards the global south and partly by Turkey’s Muslim Ottoman heritage and history. Nevertheless, Turkey’s action has remained more limited to humanitarian relief distributions in Rakhine and in Rohingya camps in Bangladesh.

On the Global Front

Latched onto the unfavorable conditions for the Rohingya at the domestic, regional and Muslim world levels is a strong anti-Muslim climate currently prevailing in the world. This has made it further difficult for them to win effective international backing to advance their cause.

Western countries usually raise an outcry on human rights violations taking place in the non-Western world but this time they are leaving the violations of Rohingya rights for the UN to deal with. Despite massive human rights violations, Britain, US, Germany, Austria and Israel are cooperating with the Myanmar military. This, in effect, lends support to state counsellor Nobel laureate Aung San Suu Kyi’s stance on “clearance operations” against the Rohingya by the military. Suu Kyi has terribly failed to condemn the military’s indiscriminate use of violence against the Rohingya civilians.

The 9/11 attacks remain at the root of global anti-Muslim feelings, a situation further exacerbated by the barbaric attacks of the ISIL fighters on Muslims and non-Muslims alike. On top of that, Islamophobia – propagation of anti-Muslim fear and hatred is a multi-million dollar industry in the West. Some 74 feminist, Christian, Zionist and news media organizations in the US alone spent more than $200 million between 2008 and 2013 to create an anti-Islam mass phobia. The fear and hatred against the Muslims have apparently developed firm roots in the Western and some non-western countries.

Donald Trump’s senseless use of anti-Muslim rhetoric helped him win the 2016 presidential election. India’s Modi believes that Muslims are inherently terrorists. He presents a binary vision of a battle between “humanity” and “terrorism.” His own India and the West represent humanity while the Muslims spearhead terrorism. Back in mid-2015, China imposed bans on Uighur Muslims in its western province of Xinjiang from fasting during Ramadan and prohibited Muslim women from using veils, what was a clear violation of religious freedoms. Myanmar’s state-run media depicts the Muslims as “detestable human fleas”, which is a clear demonization of the Muslims and an excuse to drive out the Rohingya from Rakhine.

The Rohingya people are waging their fight for rights at a time when the world looks unfavorably towards them, from domestic to the global level. The outcome is uncertain unless some significant changes take place in the global geopolitical matrix.

Mohammed Nuruzzaman is Associate professor of International Relations at the Gulf University for Science and Technology. E-mail: nuruzzaman.m@gust.edu.kw