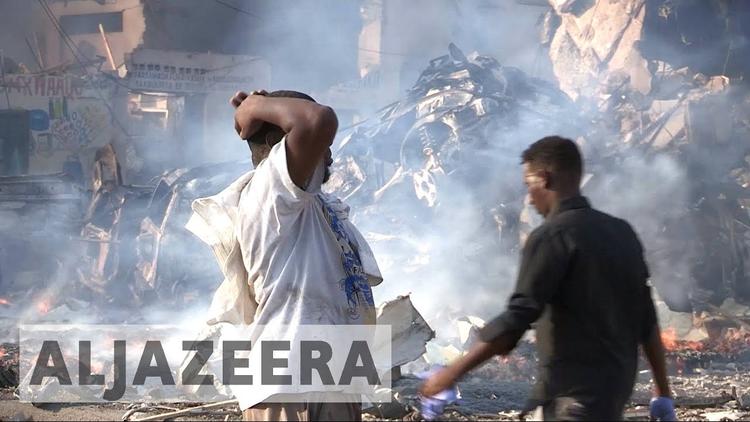 “In our 10-year experience as first responders in Mogadishu, we haven’t seen anything like this,” the Aamin Ambulance service posted on Twitter.

Somali officials say the death toll from Saturday’s truck bombing in Mogadishu has risen to 276, with another 300 people injured. Medical personnel in the Somali capital have described horrific scenes of bodies burnt beyond recognition.

Security official Mohamed Adan told AFP that the blast resulted from “a truck loaded with explosives.” Police Captain Mohamed Hussein said the explosion appeared to target a hotel and destroyed several other buildings and vehicles.

Somalia’s President Mohamed Abdullahi Mohamed has declared three days of mourning for the victims, calling on citizens to aid victims in any way they can.

“Today’s horrific attack proves our enemy would stop nothing to cause our people pain and suffering. Let’s unite against terror,” he tweeted.

“I call on our citizens to come out, extend help, donate blood and comfort the bereaved. Let’s get through this together,” Mohamed said.

A second attack took place in Madina district. “It was a car bomb. Two civilians were killed, ” Siyad Farah, a police official told Reuters. A gun battle between security forces and armed men followed the blast.

“The fighters first detonated a bomb outside the hotel’s gate, and then about four gunmen on foot gained entry into the hotel and started shooting at the patrons and also the security of the hotel,” Farah said, according to Al Jazeera.

“The hotel’s security staff, together with the police, are engaging in a gunfight inside and outside the hotel,” he added.

“It was a normal day. Very quiet and not much work to do,” Abdulkadir Abdirahman, director of Mogadishu’s ambulance service, told Al Jazeera.

“All of a sudden, I heard a very big blast. Everything shook. I have never heard anything that loud before. Within a few minutes, the sky was covered with very dark smoke that covered even the sunlight,” he said.

The blast occurred two days after the head of the U.S. Africa Command was in Mogadishu to meet with Somalia’s president. It also came 48 hours after both the defense minister and army chief left their posts without giving any reasons.

The U.N. Secretary-General Antonio Guterres said he was “sickened” by the attack, and tweeted that the world must show “unity in the face of terrorism.”

While the International Committee of the Red Cross posted, “We’re mourning the loss of 5 Somali Red Crescent volunteers, also killed in this attack.”

The U.S. military recently increased drone strikes targeting the al-Shabaab group, which have increased attacks on army bases across south and central Somalia.

There was no immediate claim of responsibility, although the Islamist militant group al Shabaab, which is allied to al-Qaida, stages regular attacks in the capital and other parts of the country.

The group is waging an insurgency against the U.N.-backed government and its African Union allies in a bid to topple the weak administration and impose its own strict interpretation of Islam.

The militants were driven out of Mogadishu in 2011 and have been steadily losing territory since then to the combined forces of African Union peacekeepers and Somali security forces.

But al Shabaab retains the ability to mount large, complex bomb attacks. Over the past three years, the number of civilians killed by insurgent bombings has steadily climbed as al Shabaab increases the size of its bombs.