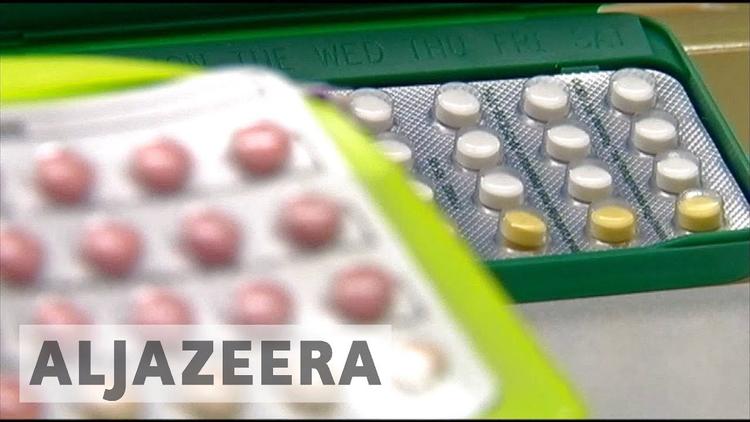 In 2004, Trump was on Howard Stern’s radio show to talk about his family. After admitting that he had had mixed feelings when he heard about his second wife’s pregnancy, Trump told Stern that he was sure that his current wife was on the pill so there would be no surprises. Stern asked, “Would you push her down the stairs if it happened?” Trump’s response was chilling: he kept on talking as if Stern had not jokingly suggested that he commit a violent assault on his wife.

When I read this story a few days ago, I had only sighed and moved on to the next story. Last week’s grim news about Trump’s attack on the birth control mandate, though, prompted me to consider Stern’s “joke” in a different way. The Trump administration has just announced that any employers (not just churches and religious agencies) had the right to refuse birth control coverage based on religious or moral grounds. Countless women might now have to pay out-of-pocket for their birth control, which can be a significant financial burden for one-third of women. The new policy of allowing employers to make arbitrary decisions about a woman’s health care options is not about freedom of religion but the freedom to limit necessary health care to employees.

Push her down the stairs. This phrase exemplifies the cruel and crude attitude toward women when misogynists are in power. According to the angry men who rant on the “manosphere,” women are bitches if they do not sleep with you. If they so sleep around, though, then they are sluts. Birth control pills are “slut pills” and women who expect a man to wear a condom are terrible..

Although Stern’s “joke” was metaphorical, then, it illustrates one key point of gender-based oppression: hostility to birth control. This is related to reproductive coercion. In some intimate partner violence situations, the male abuser sabotages the birth control method (e.g., interfering with the pills). He may also intimidate his partner into not using protection. Unfortunately, though, a pregnancy may actually trigger more violence because of jealousy of the unborn child. Though the centuries, how many miscarriages have been caused by the punches and kicks of an abusive male?

Whenever an abuser forces his partner to get pregnant or end a pregnancy, reproductive coercion has occurred on the individual level. Of course, reproductive coercion also occurs on the political level. Trump’s new decision to end the birth control mandate may be the result of a petulant effort to undo Obama’s accomplishments and/or a conscious effort to please the Far Right. On a deeper level, though, it could also be related to his well-documented aversion to women’s biology: his disgust at a lawyer who requested a meeting break to pump breast milk, his shocked reaction to the idea of Hillary Clinton using the bathroom during a debate break, and his infamous comment about Megyn Kelly’s purported “bleeding.” In this context, I am not surprised that birth control is seen by men like Trump as a “women’s issue” that should be hidden from public view.

Trump is not alone in his hostility to the idea of women’s reproductive health—the House has just passed a twenty-week abortion ban as if this procedure was not a vital part of health care. These forced-birthers are determined to make a woman continue a pregnancy even if the fetus is not viable. Like those who believe in the junk science claim that hormonal birth control induces abortions, the Congresspersons who voted for the “Pain-Capable Unborn Child Protection Act” refuse to listen to medical experts who can prove that fetuses at this stage do not feel pain.

Reproductive coercion has nothing to do with being “pro life,” as demonstrated by Congress not authorizing the CHIP program for the nine million children who need health insurance. Instead, this type of coercion has everything to do with punishing women for being women. Since almost every American woman has taken some form of birth control in her life, this male hostility to contraception access is simply male hostility toward women.

Pushing her down the stairs, then, is a grotesque (but accurate) interpretation of the recent policy changes. Fortunately, modern society regards birth control as necessary for public health as clean water. First we have to get over the shock of the government’s recent deviations from the norm of promoting women’s health. Then we must again challenge the assumptions that promote reproductive coercion. As one protest sign reads, “I can’t believe that I’m protesting this crap again.”