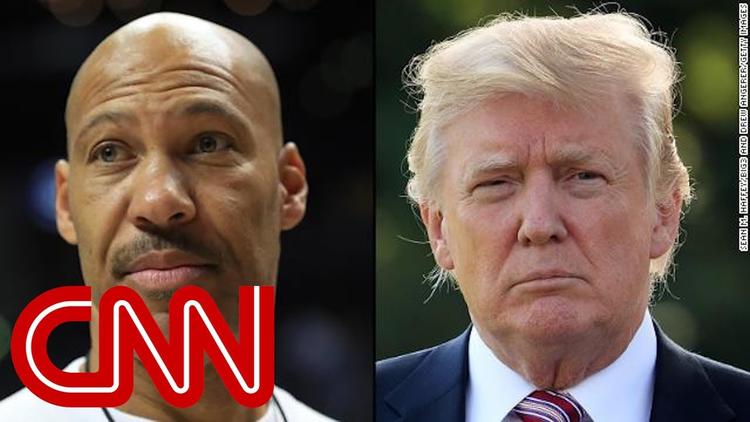 So Trump intervened with Chinese authorities to release three UCLA basketball players guilty of shoplifting from a mall in Hangzhou while playing in China. They thanked him, he told them to change their ways.

Then Levar Ball, the father of LiAngelo Ball–one of the three freed players–played down Trump’s involvement in an interview with ESPN. So of course Trump had to tweet:

Shoplifting is a very big deal in China, as it should be (5-10 years in jail), but not to father LaVar. Should have gotten his son out during my next trip to China instead. China told them why they were released. Very ungrateful!

What Trump is really saying is that we are his subjects and he is our king and we do not have a right to dissent.

One of the purposes of the US government is precisely to help American citizens who get into trouble overseas, whether their trouble resulted from their stupidity or cupidity or not. Especially in the cases where a foreign country has unreasonable statutes that would be unconstitutional in the United States. In the US a first-time offender committing shoplifting would likely be sentenced to community service, or at most 6 months in jail and a $1000 fine (though laws differ from state to state). If China sentences people to 10 years for this same offense, it is especially important that the US government try to get the US citizen back.

The US government does not intervene to get US citizens out of foreign jails because it thinks that ever after the should give up their first amendment rights. That would be noblesse oblige, the notion that high station lays obligations on the aristocracy to be generous to the poor.

Trump has shown his hand. He thinks he is doing noblesse oblige toward us all. And we should all be grateful. And Trump thereby has struck down our first amendment rights to free speech. If we aren’t free citizens but only subjects, then the government can do to us whatever it wants and we can’t complain.

Of all the many dangers posed by Trump to the United States, his instinct to suppress dissent is the worst.

You don’t save Americans abroad from unfair sentencing in order to shut them up forevermore. You save Americans so that they can going on being Americans. And that involves dissent.

So here’s what a much better president said on this issue:

“The spirit of resistance to government is so valuable on certain occasions, that I wish it to be always kept alive. It will often be exercised when wrong, but better so than not to be exercised at all. I like a little rebellion now and then.” — Thomas Jefferson letter to Abigail Adams, February 22, 1787.

Or the very first president said this:

“If men are to be precluded from offering their sentiments on a matter, which may involve the most serious and alarming consequences that can invite the consideration of mankind, reason is of no use to us; the freedom of speech may be taken away, and dumb and silent we may be led, like sheep, to the slaughter.”

And dumb and silent we are, and led to the slaughter any moment.

CNN: “Trump: I should have left UCLA players in Chinese jail”