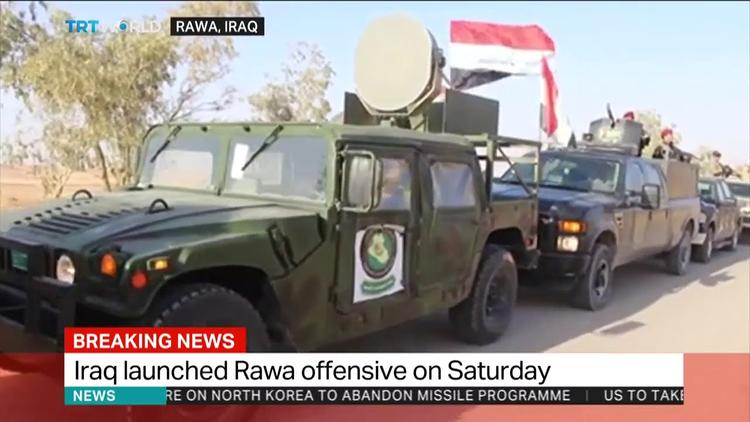 The military campaign against the Islamic State is almost over. But now, locals and politicians alike say, the Iraqi government must work to ensure they cannot return to recruit more followers.

Even as Iraq’s pro-government forces close in on Rawa, one of the very last strongholds of the extremist group known as the Islamic State, ordinary Iraqis everywhere are wondering where the extremists will turn up next.

An Iraqi soldier holds a flag up to celebrate the liberation of the town of Al Qaem recently.

A series of recent attacks and arrests are cause for concern. In Kirkuk, the headquarters of the Shiite Muslim militias in that city was attacked and a day after that, authorities announced they had arrested a terrorist network inside the city.

Last Saturday in Baghdad, local security forces announced that they had discovered an extremist cell in the city that had been planning to target pilgrims heading to the southern city of Karbala for special religious events as well as to mount an attack on locals in the capital’s central Karrada neighbourhood.

The government has chosen instead to remain silent about retaliatory acts like the destruction of homes and assassination of family members.

And in August, just a few days after the Iraqi government announced victories over the extremist group in Mosul and Tal Afar, the Islamic State, or IS, group managed to carry out an attack elsewhere in the country, on the outskirts of Dhi Qar province, that killed 74 people and injured almost 100.

Just like Al Qaeda before them, the IS group will use guerrilla and terrorist tactics to continue to harass the military and sew division among civilians. Even before the IS group occupied a single city, Al Qaeda succeeded in ratcheting up political and cultural tensions in the country for years.

“While the army was fighting in Mosul we saw hundreds of families trying to escape the city,” Abdul-Kareem al-Lami, a captain in the Iraqi army, told NIQASH. “We knew that some of them must have been members of the IS group, or at least sympathisers. It would have taken thousands of people to administrate big cities like Mosul and in Anbar province – so the IS group would have recruited many locals to help with this. But we could not arrest or interrogate them all.”

It is a major problem, al-Lami argues. Intelligence officers are continuing to investigate and to interrogate residents of former IS-occupied areas and they’re making arrests, he notes. “But a lot of people also succeeded in hiding. And there are also many families where one, or maybe more, members joined the IS group. These families need to be assured that they will not be victimized or considered terrorists. If that happens, then those families would become the next recruits for the IS group.”

“One of the government’s biggest challenges after victories over the IS group is how to deal professionally and humanely with the IS families,” suggests Hisham al-Hashimi, a researcher into armed militias in Iraq who also advises the Iraqi government. Al-Hashimi notes that many of the families have been corralled into camps and kept separate from the rest of the population – this has happened in Mosul, and the provinces of Anbar and Salahaddin. Often the families’ homes were destroyed, or they were simply not allowed to return to them.

“The government has chosen instead to put them into inhumane camps and to remain silent about retaliatory acts like the destruction of homes and assassination of family members,” Al-Hashimi continues. “It’s bad for the government’s reputation. But it’s not just that. There are around 100,000 people in families with a connection to the IS group and there is a likelihood that, if the harsh treatment continues, they will make up the next generation of the IS group.”

Then again it is also very difficult for the Iraqi government to do much about this problem in some areas. They only barely control security in cities formerly run by the IS group and have not managed to restore all sorts of state services or been able to accomplish much reconstruction. Security in the different areas is often controlled by a patchwork of official, semi-official, and unofficial groups, including the military, militias and tribal groups.

The next fight against the extremists will be one that focuses on intelligence, says Iraqi MP Iskandar Wattout, a member of the Iraqi parliament’s security committee. “The battle against the extremists will continue but we have to change tactics, because it’s not about fighting a war anymore,” he told NIQASH. “Over the coming months we need to work harder with the intelligence community and with sharing information with other nations. We need information on sleeper cells and on the places where IS fighters have fled, such as into the desert between Anbar, Salahaddin and Mosul, which is often called their ‘desert island’.”

The extremists thrive on community division, say analysts and politicians alike. Bombings or terrorist acts that target one community and not another, only deepen existing discord in Iraq and have often resulted in politicians slinging insults and accusations, and increased enmity between different groups of Iraqis both in real life and online.

The latest events in northern Iraq are a good example of how political conflict works in extremists’ favour. The conflict between the country’s Kurds and Arabs over who should be in charge of the city of Kirkuk and its surrounds is something that the IS group can easily exploit.

The Iraqi government really needs to support people in the provinces from which the extremists have just been pushed, adds Noura al-Bijari, an MP for Ninawa province, of which Mosul is the capital. “Exclusions, marginalization and ignoring people’s needs for jobs and reconstruction is what creates resentment,” al-Bijari told NIQASH. “The government really needs to come up with serious plan for reconstruction or the extremists will continue to make good use of citizens’ dissatisfaction to recruit new members.”