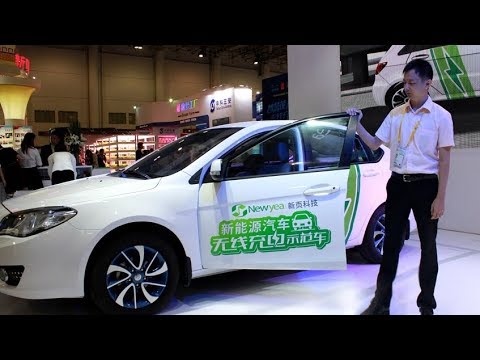 China and South Korea could be game changers on climate — and create a more peaceful region in the process.

And now, in the wake of those typhoons comes a mighty wind from the United States. Donald Trump, in the longest foreign trip of his presidency, is currently visiting South Korea, Japan, China, Vietnam, and the Philippines. The silver lining on this Ugly American Tour: Trump probably won’t start a war in a region where he’s currently traveling.

Lost among all this bad news has been some very good news out of Asia. It hasn’t received much media attention here, probably because it only peripherally involves the United States.

Last week, South Korea and China ended a yearlong spat over the deployment of a U.S. missile defense system called Terminal High Altitude Area Defense (THAAD). China, believing the system to be designed to eliminate its nuclear deterrent, punished South Korea economically for welcoming THAAD. Now a new government in Seoul, led by liberal president Moon Jae-in, has announced that it would not add to the existing THAAD system or participate in the proposed regional missile defense that Washington wants to set up. That was enough for China to reengage economically.

It’s a delicate balance for South Korea — to maintain its alliance with the United States and yet repair relations with China. The Trump administration is much happier with the passive-aggressive attitude of Tokyo — passively accepting U.S. hegemony while aggressively pursuing an offensive military posture — than with Seoul’s somewhat more independent position. Witness the time Trump lavished on Abe on this current trip including a round of golf. South Korea, meanwhile, had to make due with a brief stopover and a strident lecture by the president before the National Assembly.

The two countries ought to build on their newly repaired relationship. They can make like Germany and France after World War II. But instead of a new regional order based on coal and steel, Beijing and Seoul should establish something completely new: an Asian Environmental Community that promotes renewable energy and sustainable growth.

Much has been made of Trump’s reeling in of American influence around the world, at least on the soft-power side of things, and China’s eager efforts to capitalize on the new global opportunities. Perhaps future historians will look back at this moment as the time when China began to replace the United States as the anchor of the international community. Or perhaps they will identify this era as the moment when everything began to unravel, from the EU to the UN.

But let’s imagine a different scenario in which the threat of climate change plays the same integrative function as alien invaders in Hollywood films. The planet is at risk: let’s all fight the common enemy together!

True, the world so far hasn’t gotten the message. This week the latest round of meetings began in Germany to discuss the commitments made in the Paris climate agreement of two years ago. The Trump administration, aside from a few token representatives, has been conspicuously absent. Also absent was any real hope that the agreement would achieve its goal of keeping the rise in global temperature from hitting a 2 degree Celsius increase above pre-industrial levels.

Reports The New York Times: “No major industrialized country is currently on track to fulfill its pledge, according to new data from the Climate Action Tracker. Not the European Union. Not Canada. Not Japan.” Even if they do meet their commitments, it still won’t be enough. According to a recent Nature study, even if humans stopped all use of fossil fuels immediately, the planet would still register a 2 degree Celsius increase by 2100.

Not even the announcements that both Syria and Nicaragua will join the Paris agreement, leaving Trump’s America as the only outlier, can alleviate this grim news. The Maldives, Mumbai, and Miami are sinking: It’s time to make plans to move to Mongolia.

Enter South Korea and Japan. Here are two economic powerhouses — in the most economically dynamic region of the world — with great PR on climate change.

“Tackling climate change is a shared mission for mankind,” Chinese Premier Xi Jinping said at the launch of the Paris agreement. “Let us join hands to contribute to the establishment of an equitable and effective global mechanism on climate change, work for global sustainable development at a high level, and bring about new international relations featuring win-win cooperation.”

Sounds good. And China has pushed forward with impressive investments into renewable energy — $360 billion by the end of the decade — along with stopping the construction of over 100 new coal-fired power plants. Although China is set to reach peak emissions a decade or more before its 2030 goal, the country remains the largest emitter of greenhouse gasses, having surpassed the United States in 2007. In 2015, it released nearly twice as much carbon dioxide into the atmosphere as did the United States, and coal still supplies two-thirds of its energy needs. In other words, China has a long way to go before it can claim substantive leadership in stopping global warming.

South Korea has also talked a good game. Former president Lee Myung Bak created the Global Green Growth Initiative, now a multilateral body based in Seoul, to promote sustainability. In 2009, Lee told the UN, “To proactively respond to climate change, Korea adopted ‘Low Carbon Green Growth’ as a guiding vision for our nation and a strategy for further development. We are currently working to enact a

Framework Law on Green Growth and establish a Five-Year Plan for Green Growth. Thereby, we will not only transform our economic and industrial structures, but also change our very lifestyles to become more future-oriented.”

In reality, however, South Korea backtracked from the pledges made during the Lee era. Under his successor Park Geun Hye, now detained on charges of corruption, Korea made a U-turn on greenhouse gas emissions and decided to rely even more heavily on coal for energy generation. As a result of this change of policy, the Institute for Climate Change Action declared South Korea one of four global “climate villains” at the end of 2016.

In other words, both China and South Korea have made impressive commitments to lower the global thermometer even as they continue to be a big part of the problem. But let’s focus on the future. There’s a new government in Seoul. And China has a chance to replace the United States as the global leader on this issue.

So, let’s take it to the next level.

When France and Germany formed a new partnership in 1950, the architects had much grander ambitions than simply coordinating the production of coal and steel. They wanted to ensure a peaceful Europe.

In his famous declaration that year, French Foreign Minister Robert Schuman made the case for cooperation with former enemy Germany:

Five years, almost to the day, after the unconditional surrender of Germany, France is accomplishing the first decisive act for European construction and is associating Germany with this. Conditions in Europe are going to be entirely changed because of it. This transformation will facilitate other action which has been impossible until this day.

Europe will be born from this, a Europe which is solidly united and constructed around a strong framework. It will be a Europe where the standard of living will rise by grouping together production and expanding markets, thus encouraging the lowering of prices.

Up to now, East Asia has been divided ideologically, by territorial disputes, and by different economic visions. The Korean peninsula is a potent representation of all these conflicts. With its One Belt, One Road (OBOR) program, China has offered one way of uniting the region through massive infrastructure development. For many countries in the region, it’s a deal they can’t refuse. The aforementioned GGGI is working to “green” OBOR and even draw China, South Korea, and Japan into trilateral coordination.

There are good arguments for including Japan in a new Asian Environmental Community from the very beginning. Particularly at the municipal level, Japan has made great strides in reducing its carbon footprint. However, there’s considerable resistance in Korea to greater foreign policy coordination with Japan. Japan has outstanding territorial disputes with both China and South Korea. And the Abe administration is focused on breaking out of its constitutional restraints on fielding an offensive military. For all those reasons, it would be best to focus first on achieving consensus between Seoul and Beijing.

So, what would this new Asian Environmental Community do?

Both South Korea and China set rather unambitious targets under the Paris agreement. Their first task would be to establish a more ambitious agenda for cuts in carbon emissions. There’s no reason why both countries can’t follow the example of Uruguay, which has managed to wean itself almost entirely from oil imports over the last two decades. The economic benefits should be attractive to both Seoul and Beijing: The cost of electricity has dropped considerably in Uruguay, the sustainable energy sector generates more jobs than the oil sector, and the country now exports its (clean) energy to its neighbors. Both China and South Korea have traditionally relied on imported oil and gas: This kind of import substitution should appeal to both liberals and conservatives.

Next, the two countries could partner on a much more thoroughgoing greening of OBOR, not just incorporating some sustainable elements but ensuring that the new transportation lines, ports, and power plants are carbon neutral. Yes, the massive undertaking has already started, with nearly 1,700 projects over the last three years. But it’s still at the beginning stages, with plenty of future investment to green.

But a new Asian Environmental Community could be more ambitious still.

Just as Robert Schuman imagined that the coal and steel agreement between France and Germany would bring a broken Europe back together, at least the western half of it, the partnership of China and South Korea could offer a way for Asia to sidestep its myriad disagreements and come together around the one thing that all countries can support. As with early European cooperation, the environmental partnership would be mutually beneficial. Coordinated production of renewable energy — solar panels, wind turbines — could take advantage of economies of scale to bring down prices even more. Generation of clean energy for export could help energy-poor countries go beyond their Paris commitments.

And all this cooperation might just spill over into other realms, making resolution of territorial disputes, economic disagreements, and even North Korea’s nuclear program that much more likely. Never has Northeast Asia been more in need of a virtuous circle of engagement.

CGTN: “China developing green energy a must not a maybe”