Sean Hannity manages to combine being sneaky with being a bully. You think of a bully as maybe too straightforward, someone who hulks over others glaring and tries to impose his will on them. It is the 89 pound weakling we think of as sneaky, going behind our backs or depending on slander to manipulate people because he is physically unprepossessing. But Hannity, who has the most bull-like neck on television (any television, anywhere in the world, including channels that specialize in showing, like, bulls) is also a sly trickster, demonstrating the smallness of his soul. He is sort of like one of those medieval gryphons, half snake and half vulture.

And so Hannity went up against a great-souled journalist, Jake Tapper, a man of genuine integrity and one of the best things about CNN.

First, the despicable Fox Cable “News” (the original Fake News that Russia Today and Sputnik only imitated) attacked Tapper in a now-deleted tweet:

(Allahu Akbar is Arabic for God is Great, literally “the Greatest.”)

Tapper had been contextualizing the New York mini-bus-driver-terrorist, who used the phrase, by pointing out that it isn’t primarily a militant saying.

Fox News is lying. I said it can be said at beautiful moments (wedding, birth) and too often at times like this (horrific terrorist attack). https://t.co/rQx3r0za6I

What Tapper had said was that Muslims use the phrase “God is great” in celebratory circumstances such as weddings or the birth of a child.

This is true. Here, for instance is a greeting card for the Feast of Sacrifice or Eid al-Adha, commemorating the sparing of Abraham’s son by God, a moment also commemorated in sermons at worshipful gatherings in Judaism and Christianity, even if they don’t give it its own feast day. On this day, Muslims gather with family and friends, make the rounds, share food, and generally have a joyous and quite peaceful time of it. I remember in Lebanon Muslim friends involving Christians in the festivities in homes. 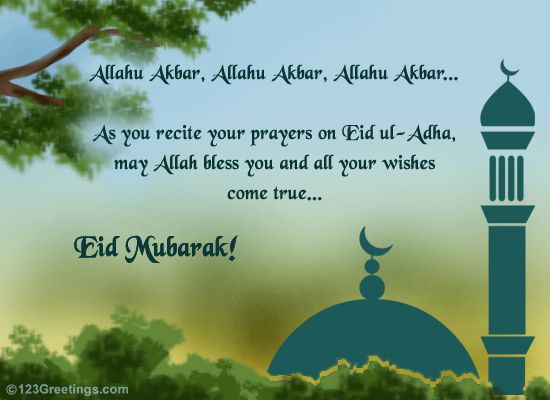 But Sean Hannity, being both a bully and sneaky, would not let it go even after Fox (afraid of another multi-million dollar libel or harassment suit) deleted the tweet.

He said that the liberal media were “having a hard time” understanding terrorists. Then he attacked “liberal fake news CNN’s fake Jake Tapper” as having alleged that “Allahu Akbar” can be used in “beautiful circumstances.”

Hannity observed: “Tapper has since been levying multiple attacks on the Fox News channel report in the comments in context that you just listened to . . . Hey Jake, maybe that’s why you have low ratings . . . Tell your audience the truth.”

Hannity does have good ratings (though that is a low bar on basic cable). But even better ratings have been won by “American Ninja Warrior”, “Running Wild with Bear Grylls” and “Food Fighters,” all of which have far more serious policy substance as well as entertainment value than Hannity.

So if “God is Great” is such a horrific thing to say under all circumstances, Mr. Hannity, why do Jews and Christians say it? Indeed, why is it in the Catechism of the Catholic Church?

Under the rubric “IV. THE IMPLICATIONS OF FAITH IN ONE GOD” and quoting Job 36:26, the Catechism says:

Then elsewhere in the Bible, just for instance, there is Psalms 95:3 (KJV)– “For the LORD is a great God, and a great King above all gods.”

Or there is Titus 2:13 from the NT: “Looking for that blessed hope, and the glorious appearing of the great God (ho megalos Theos) and our Saviour Jesus Christ. . .”

Ho Megalos Theos in Greek, “the Great God” is about as close as you could get to a translation of the Arabic Allahu Akbar.

As for the misuse of such religious language, Mr. Hannity might remember that when Pope Urban II declared the first Crusade, Christians used “Deus Vult” (God wants it!) as a battle cry. They later sacked Constantinople and slit the throats of the Muslims and Jews in Jerusalem shouting “God wants it thus!”

Iberian Catholic warriors attacking West Africans or Brazilians would shout “Santiago and have at them!” This was an invocation of St. James, which, you know, is pretty religious. They said this while slaughtering Mexicans, Ghanaians, Arabs and Berbers, whom they ultimately either killed or ethnically cleansed or forcibly converted. Catholic Westerners. Sometimes they cried “St. George,” instead.

All religious language can be misused. To demonize a pious phrase like “God is Great,” woven, as Jake Tapper says, throughout the joyful moments of everyday Muslim life, just because it is also pronounced by a fringe of evil persons, is just bigotry.

But then without bigotry Sean Hannity would be nobody. He is only known and paid millions of dollars by the ogre Rupert Murdoch because he is a one man bigotry machine.