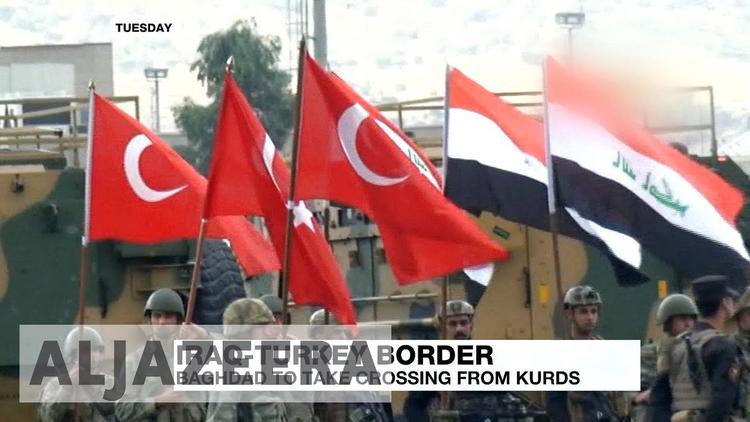 I stood at a border crossing as thousands of Yazidis and other refugees fled ISIS attacks on Mosul and nearby cities. Tens of thousands of refugees flooded into the Kurdish Region of Iraq as Kurdish relief workers greeted them with water and food.

It was August 2014, and I was there on assignment as a freelance correspondent. The Obama administration had started bombing northern Iraq just a few days earlier. The explanation given at the time, now long forgotten, was the US would bomb for a limited time to protect the Kurdish capital of Erbil and stop the attacks on Yazidis.

Those goals were accomplished within a matter of weeks as the ISIS offensive stopped. But the bombing continues to this day. The US eventually sent 5,000 troops to Iraq and then 1,500 troops to Syria.

Neither the Obama nor Trump administrations have made a convincing argument on the constitutionally of these new wars. They cite a Congressional resolution passed after 9/11 calling on the US to pursue Al Qaeda and the Taliban. ISIS and other groups the US is fighting are not Al Qaeda or the Taliban, and in fact, didn’t exist in 2011.

But the events of 2014 did cement closer ties between the US and Iraq’s Kurdish Regional Government (KRG) led by President Masoud Barzani. The Iraqi Army had collapsed in the face of the ISIS offensive. The Kurdish armed forces, known as peshmerga, were the only reliable Iraqi fighters allied with the US in 2014. The peshmerga moved into the oil-rich city of Kirkuk and other disputed areas, expanding the Kurdish Region by 40% with the tacit approval of the US.

“We now genuinely know the United States supports us,” said Fuad Hussein at the time. He was Barzani’s chief of staff.

Fast forward to today. ISIS is near military defeat. The Kurds had long sought independence from Iraq, and Barzani thinks it’s payback time. In September he held an independence referendum and 92% voted to secede.

Then all hell broke loose.

Washington, Ankara, Tehran and Baghdad all opposed the referendum. The Iraqi Army, with US support, retook Kirkuk and other disputed areas. Overnight the KRG lost 25% of its oil revenues. The regional government was already three months behind in paying its employees, and the economic crisis got worse.

“I was really stunned,” Yerevan Adham told me. We met when he was a journalist in Kurdistan and he’s now a research fellow at the Middle East Research Institute in Washington. “How can you do this (hold a referendum) without a Plan B?”

The chaos continued. On Nov. 1 President Barzani resigned. But thugs from his Kurdistan Democratic Party (KDP) burned numerous opposition party offices, and beat up parliamentarians and opposition media, sending one reporter to hospital.

“The militias showed a middle finger to Trump,” said Adham.

Kurds have bitter memories of a previous US betrayal summed up in just two words: Henry Kissinger. In the early 1970s Shah Mohammad Reza Pahlavi of Iran and Saddam Hussein of Iraq disputed control of the waterway running between their countries. The US and the Shah backed a Kurdish insurgency against Iraq as a means to pressure Saddam.

But then in 1975 Kissinger helped negotiate a settlement of the issue and gave Saddam a green light to attack the Kurds. Barzani and other Kurdish leaders had just hours to flee for their lives. Some 200,000 Kurds escaped into Iran and 40,000 were forcibly repatriated.

Kissinger famously said, “America has no permanent friends or enemies, only interests.” Somehow those “interests” always favor big corporations, not oppressed people. The US seeks domination of the Middle East for its oil, strategic military bases and as part of geopolitical competition with enemies du jour. (Today it’s Russia, Iran and China.)

What Kissinger’s phrase really means is that the US will ally with people one day and stab them in the back the next.

I frequently mention this when speaking to Kurdish groups in the US and in conversations in the Kurdish Region. Everyone used to assure me that those times are long gone. The US would never double cross the Kurds again, they argued.

“Henry Kissinger betrayed the Kurds, and I can smell the same scenario in 2017,” Professor Nabaz Nawzad told me. He’s a lecturer at the Lebanese French University in Erbil. “We believed the US would protect us from any aggression by Iraq, Turkey and Iran. But we were wrong.”

Some 30 million Kurds live in the Middle East, the world’s largest nationality without a nation. They live in Iran, Iraq, Syria and Turkey. The colonial powers denied the Kurds nationhood after World War I. And the desire for nationhood remains strong to this day.

Such national sentiments are one thing, but the practicality of independence is quite another. There is no significant independence movement among Kurds in Iran. The leading Kurdish party in Turkey and Syria, the Kurdistan Workers Party (PKK), calls for autonomy, not independence.

President Barzani was supposed to leave office in 2013 but extended his rule without holding new elections. Until last week, the Parliament hadn’t held a substantive meeting for two years because Barzani’s KDP wouldn’t allow opposition leaders to enter Erbil where the parliament building is located. Even with President Barzani’s resignation, his nephew remains Prime Minister and his son is head of the Kurdish intelligence agency.

Kurds had hoped the KRG would be different from other governments in the region. But corruption and violations of democratic norms prevail. “Democracy is in retreat in Kurdistan,” said research fellow Adham.

The decision to hold an independence referendum backfired horribly. Unfortunately, the Kurdish people will pay a steep price economically and politically. Neither the US, Russia nor any other power will bail them out.

It’s time for Kurds to rely on their own resources and break from reliance on US. Remember the words of Mustafa Barzani, father of the current president. “We do not want to be anybody’s pawns. We are an ancient people. We want sarbasti — freedom.”

Reese Erlich’s syndicated column on international affairs appears every two weeks in 48 Hills. The revised and updated edition of his book The Iran Agenda: the Real Story of US and Policy and the Mideast Crisis, will be published in 2018.

Reprinted with author’s permission from 48hills.org