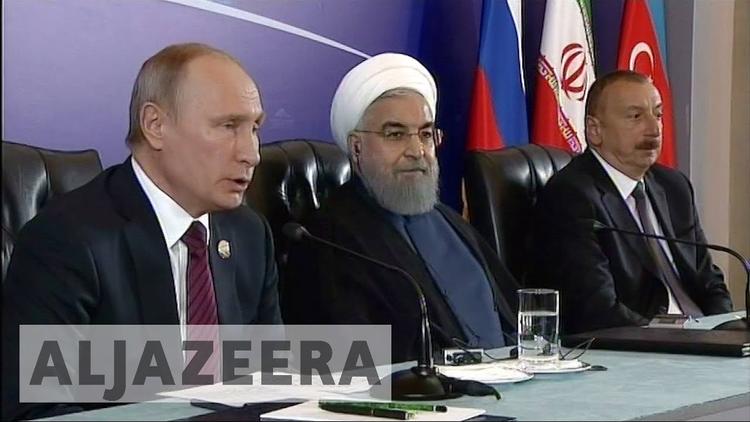 The president of the Russian Federation Vladimir Putin visited Tehran on Wednesday for consultations with President Hassan Rouhani and the country’s clerical leader, Ayatollah Ali Khamenei.

Khamenei is quoted by Tahrir [Liberation] as saying that Russia and Iran could cooperate to isolate the United States and blunt the effectiveness of US Treasury Department sanctions, through the bilateral use of local currencies instead of the dollar for international transactions.

Khamenei is bringing this up because Washington has put new sanctions on Iran. One of the ways Washington has of hurting Iran is to kick it off international bank exchanges operating with the dollar. In the severe sanction years of Obama, that step mightily interfered with Iran’s ability to trade, since without being part of the banking exchanges, which work in dollars, Iran had no way of receiving or remitting money in the course of trade transactions. Iran probably fears that Trump will try to get Iran kicked off the currency exchanges again.

The severe sanctions have been dropped, but Khamenei does not trust Trump and wants a back up. If Russia accepts riyals and Iran accepts rubles, neither country needs dollars and the US has no way of interfering in such trade deals. The drawback is that if Russia accepts payments in a soft currency like the Iranian riyal, it pretty much has to buy things from Iran with it. During the severe sanctions years, Iran did similar transactions with India, accepting rupees for petroleum and then buying manufactured goods from India.

Khamenei also looked forward to linking Iranian ports on the Gulf with St. Petersburg by rail. All through the last two centuries, Great Britain worried that Russia would move south to gain a war water port. Now, it seems that Anglo-American hostility to both Russia and Iran may be producing exactly that outcome.

” At the trilateral talks, Presidents Rouhani, Putin and Aliyev signed the Tehran Declaration, declaring their intent to develop three-way cooperation in fields including the long-awaited International North-South Transport Corridor (INSTC) which will connect Moscow to the Persian Gulf.

The Russian oil company Rosneft announced a strategic plan with Iran to cooperate with the Iranian state oil company, saying it will sink $50 billion into Iran investments.

Putin reassured the Iranian leadership that Moscow stands behind the nuclear accord.

1. Cooperation in completing infrastructural rail and road links between the two countries. India has built a port at Chabahar in Iran, to bypass Pakistan and China, from which it hopes to transship goods from India to Russia and Central Asia. This project could lead to a huge increase in the volume of Russian trade with countries to its south.

2. Safeguarding the 2015 Joint Plan of Collective Action (JCPOA) or nuclear deal between Iran and the UN Security Council, in the face of the attempt of Donald Trump to destroy it.

Putin said of Donald Trump’s speech to the UN attacking the nuclear deal, “I could never imagine that the US would act this way.”

3. Consultation on the future of Syria after the end of ISIL (ISIS, Daesh), out of a conviction that Iran is the only reliable partner for Russia in the Middle East.

4. Cooperation in influencing the price of petroleum and natural gas in global markets.