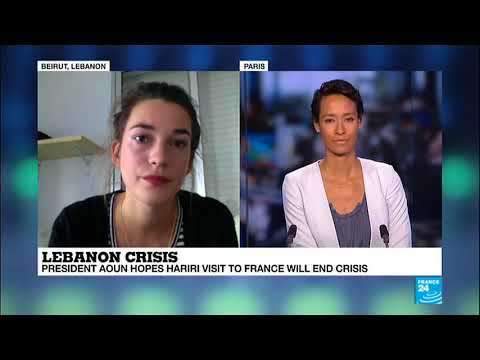 Lebanese prime minister Saad Hariri arrived Saturday morning with his family in Paris, after a two-week stay in Saudi Arabia, where he is a dual citizen and has a mansion. Lebanese president Michel Aoun had charged that Saudi Arabia had taken Hariri hostage, but the latter denies the charge. The trip (or escape) to Paris was arranged by French president Emmanuel Macron on a trip to Riyadh earlier this week. France is the former colonial power in Lebanon and has excellent relations with Saudi Arabia because of security cooperation and substantial arms sales to the kingdom by Paris.

Lebanese foreign minister Gebran Bassil had visited Moscow on Thursday and while there said that Hariri’s resignation was an attempt to force out President Aoun (a long-time ally of the Shiite Hizbullah). What is more likely is that Bin Salman is trying shape the outcome of the May, 2018, parliamentary elections.

Hariri, a Sunni Muslim, resigned by telephone from his post from Saudi Arabia, but the resignation was not accepted by Christian President Aoun, on the grounds that it had to be submitted while the PM was actually in Lebanon. It is rumored that he was forced to resign by Saudi crown prince Muhammad Bin Salman because he declined to take a strong stance against Hizbullah, the Shiite party-militia allied with Iran. Since 2016 Hariri has served in a national unity government dominated by Hizbullah and its Christian allies. Given the current shape of Lebanese politics, however, any Sunni prime minister (the prime minister in Lebanon is always Sunni) would have to cooperate with Hizbullah to keep power. President Aoun, a Christian, became president through such cooperation.

It is also rumored that Saudi authorities are annoyed that Hariri appears to have run through the $4 bn family wealth he inherited from his father, Rafiq Hariri, a fortune gained in Saudi Arabia. That wealth had allowed the formation of Future (al-Mustaqbal) TV, which aims at bolstering Sunni and Saudi soft power in Lebanon. And perhaps it was intended to back the formation of a Sunni militia at one point, but those plans have failed. The Saudis may be tired of bankrolling the allegedly profligate Hariri. That is, Hariri may have gotten caught in the crown prince’s anti-corruption campaign, in the course of which he has detained several other wealthy Saudi citizens.

The Hariri affair is raising tensions inside Lebanon but also more generally. Saudi Arabia withdrew its ambassador to Germany to protest remarks of foreign minister Sigmar Gabriel, who said that Lebanon must not become a Saudi plaything and implied that it was under Saudi influence.

On Thursday, French foreign minister Jean-Yves Le Drian said that France was disturbed by the hegemonic temptation of Iran in the Middle East, drawing a sharp rebuked from Iran, which accused France of taking sides.

Hariri’s actions and decisions in the coming month will help analysts predict the economic health of Lebanon and the Middle East in the coming year or two.