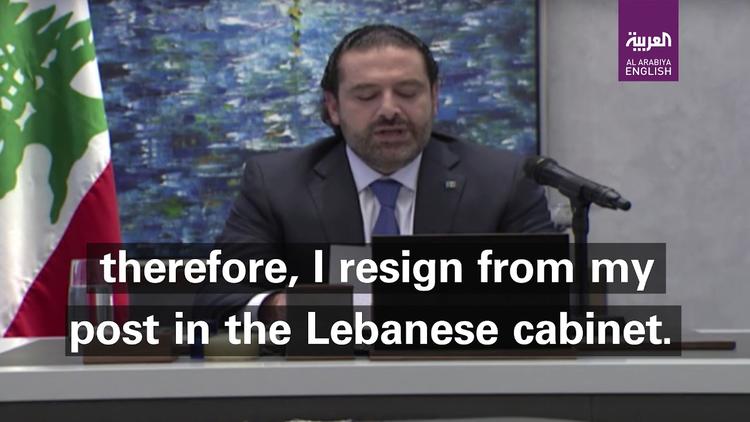 Lebanon’s prime minister Saad al-Hariri resigned on Saturday, citing an assassination plot against him and accusing Iran and its Lebanese ally Hezbollah of sowing strife in the Arab world.

His resignation thrusts Lebanon back into the frontline of Saudi-Iranian regional rivalry and seems likely to exacerbate sectarian tensions between Lebanese Sunni and Shia Muslims.

It also shatters a coalition government formed last year after years of political deadlock, and which was seen as representing a victory for Shia Hezbollah and Iran.

Hariri, who is closely allied with Saudi Arabia, alleged in a televised broadcast that Hezbollah was “directing weapons” at Yemenis, Syrians and Lebanese and said the Arab world would “cut off the hands that wickedly extend to it”.

“We are living in a climate similar to the atmosphere that prevailed before the assassination of (his father the late prime minister) martyr Rafik al-Hariri. I have sensed what is being plotted covertly to target my life,” Hariri said.

Rafik al-Hariri was killed in a 2005 Beirut waterfront bomb attack that also killed 21 other people, shaking the country and pushing his son Saad into politics.

In a statement read from an undisclosed location, Hariri said Hezbollah and Iran had brought Lebanon into the “eye of a storm” of international sanctions.

President Michel Aoun’s office said Hariri had called him from “outside Lebanon” to inform him of his resignation.

A UN-backed tribunal charged five Hezbollah members over Rafik al-Hariri’s killing. Their trial in absentia at the Hague began in January 2014 and Hezbollah and the Syrian government, have both denied any involvement in the killing.

In his statement, Hariri said Iran was “losing in its interference in the affairs of the Arab world”, adding that Lebanon would “rise as it had done in the past”.

Hezbollah’s close ties to Iran and its support for Syrian President Bashar al-Assad in his war with rebels trying to overthrow him have been a major source of strife in neighbouring tiny Lebanon for years.

Over previous decades, Hezbollah was able to impose a reality in Lebanon with the power of its weapons, which it claims is the (anti-Israel) resistance’s weapons, which are aimed at the chests of our Syrian and Yemeni brothers, not to mention the Lebanese.

He said the Lebanese people were suffering from Hezbollah’s interventions, both internally and at the level of their relationships with other Arab countries.

Hariri has visited Saudi Arabia, a political foe of Iran and Hezbollah, twice in the past week, meeting Crown Prince Mohammed bin Salman and other senior officials.