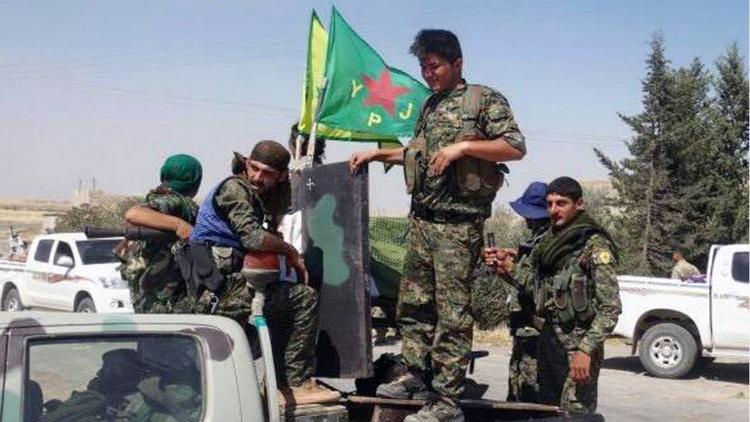 Trump is alleged to have promised Turkish President Tayyip Erdogan that he will cease arming the YPG Kurds in Syria.

This news comes just around the time there is a flurry of articles about how the Trump administration wants to stay long term in eastern Syria, where 2,000 US special forces personnel are embedded with the left-anarchist Kurds.

So if the US wants to stay embedded with the Kurds, why is it stabbing them in the back to please Erdogan?

They say in the army that everyone wants to do strategy but the real experts do logistics. Logistics is the science of moving troops, supplies and weapons around.

The fact is that the US special ops forces in eastern Syria have logistics difficulties. The al-Assad regime does not want them there now that Daesh (ISIS, ISIL) has been largely defeated. Iran and Hizbullah and the Iraqi Shiite militias do not want them there. They can be blockaded.

Plus you would never want special ops guys in the field in a treacherous place like Raqqa (in the sense that the Arab population opposes their presence) without the ability to extract them if something goes wrong. From where will the helicopters take off?

Turkey. The logistical support for the 2000 Americans fighting in eastern Syria comes from Incirlik Air Force base in Turkey, which is leased to the US military.

Theoretically, you could base the helicopters in Mosul and fly over from there, but I am not aware that the US has planes parked at any military base near Mosul. The thousands of US personnel at the Iraq command are in Baghdad, with some special operations personnel out near Iraqi mopping up operations against Daesh, giving strategic advice. Or at least that is what they had been doing. ISIL is still behind ongoing insurgencies in some Sunni Arab cities like Samarra.

But given how perilous the situation in northern Iraq still is, you’d be raising the question of who would rescue the rescuer if you tried to put support forces there to help with Syria. Plus the Iraqi government is now tight with Damascus and might not allow cross border activities if the al-Assad regime complained to Baghdad about them.

So the support is in Incirlik. And Turkey is happy enough to have 2000 US troops in Syria. Turkey lost the Syrian war and is unhappy about Russian and Iranian dominance of Syria, which the Sunni Arab Muslim activists supported by Turkey see as foreign occupation.

So for Turkey to offset Russian and Iranian power in Syria by backing a long-term US spec ops presence makes political sense.

Except for one thing.

Turkey is terrified of the Kurds?

Turkey is terrified of the Kurds.

The YPG is an independent militia, but has had ties of ideology to the PKK (the Kurdistan Workers Party), which both the US and Turkey designate as a terrorist organization. The PKK wants at least semi-autonomy for the Kurdish regions of eastern Anatolia. Turkey sees that demand as a dire threat that could end up partitioning the country.

Turkey and the US differ about the Syrian Kurdish YPG. Turkey sees it as just a PKK knock off, while the US declines to list it as a terrorist organization.

So if Erdogan is apoplectic about the US arming the YPG Kurds because he thinks the medium weaponry the US supplies will end up in PKK hands, why would he continue to allow the 2000 US special ops troops to receive support from Incirlik Base?

Hence, he pressed Trump to say that the US won’t supply weapons to the YPG. I presume that what that means is that it won’t supply them with medium to heavy weapons. No big artillery pieces or helicopter gunships. Everybody has kalashnikov machine guns, that isn’t the issue.

Plus if the US troops remain embedded with the Kurds, that is a brake on any hooking up with PKK for mischief on the Turkish side of the border (though the YPG hasn’t demonstrated those tendencies in my view, anyway).

So the compromise is that the Kurds get only light weaponry, now that Daesh/ ISIL is defeated. And the US troops remain, thus forestalling (from Ankara’s point of view) a complete Russo-Iranian takeover of the country.

One wrinkle is that Trump is not very powerful with the Pentagon, and it isn’t clear that Secretary of Defense Jim Mattis will fulfill Trump’s pledge to Ankara. Hence the Turkish government is demanding guarantees.

And, what happens if the Syrian Arab Army, which does not recognize Kurdish semi-autonomy, makes a move on say Hasaka and the Kurds aren’t well armed enough to fend them off?

The Russians are saying that the US presence on Syrian soil, opposed by Damascus, is a form of aggressive occupation. The question is, how safe are these embedded troops, with ISIL, Shiite militias and Syrian secret police all over that area?